Share All sharing options for: Liverpool 1, United 1: Failing to Finish

In a match that was predictably testy, all the drama came in the last twenty minutes as Liverpool and United shared the points at Anfield. It was the same old story for Liverpool, who had plenty of clear-cut chances go begging. A point against the league leaders isn't the worst result, and once again there were plenty of reasons for encouragement. But given the opportunities they had and the occasion of the match, it's hard not to come away feeling at least a little disappointed.

As expected, Steven Gerrard made his full return to the squad after a few substitute performance, starting wide in a midfield that saw Lucas and Charlie Adam partner centrally with Dirk Kuyt more advanced in support of Luis Suarez and Stewart Downing on the left flank. The only real surprises came at the back, as Martin Skrtel started ahead of Daniel Agger and Martin Kelly started at right-back, with Glen Johnson completely missing from the squad. 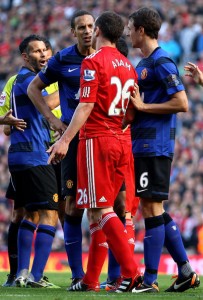 The opening minutes were marked by the usual frenetic pace we see in these fixtures, as both sides crashed around carelessly and apparently had little interest in playing football. Neither side had a chance worth mentioning in the opening twenty minutes, with the hosts doing a bit more of the pressing but failing to create a good look at goal. Steven Gerrard's cross from a quick corner in the 21st minute buzzed narrowly over Luis Suarez's head as things started to open up a bit more, but sharp defending on both sides left little room for creativity.

Lucas received a soft first booking of the match in the 27th after coming in late on Ji-Sung Park, and after thirty minutes there was still little to shout about. The only real chance of the half for either side came shortly after the half-hour mark, though, as a Charlie Adam effort from distance deflected perfectly to the feet of Suarez. The Uruguayan turned Jonny Evans on the edge of the area and fired on goal with his left, but the shot was straight at David De Gea, who parried away easily. A booking for Ashley Young gave Liverpool a free kick deep on the right side, but De Gea again parried away, this time from a low Charlie Adam free kick.

United came out strong after the break, winning a free kick on a weak foul from Lucas on Young. Nothing came of it, though, and as the second half progressed Liverpool had the better of possession. Rio Ferdinand earned the third booking of the match just before Jordan Henderson replaced the clearly tired and off-form Lucas. The hosts continued to push forward, with United looking content to play out a draw.

Rio Ferdinand was fortunate to avoid a second yellow with challenge on Charlie Adam, who'd worked his way forward on the break and went down easily. Andre Marriner's failure to send off Ferdinand was quickly forgotten, however, as Liverpool would take the lead from the resulting free kick.

Steven Gerrard curled one just inside Ryan Giggs, who had peeled off the end of the wall, and David De Gea was left rooted to the spot. Alex Ferguson rung in the changes immediately bringing on both Nani and Wayne Rooney came on after the opener with Javier Hernandez joining the fray soon after. The latter had the biggest impact, netting the equalizer on the second of two quick United corners in the 81st minute. He shook Skrtel, who'd gradually faded from the match, and nodded home after a flick-on.

Liverpool responded well and almost instantly found the go-ahead; an inch-perfect cross by Stewart Downing for Dirk Kuyt was saved by De Gea, and the young Spanish keeper saved an audacious lob from Jordan Henderson ten minutes later. The resulting corner led to a scramble that Martin Skrtel skied, and the last chance of the match fell to Henderson, whose header skimmed just over the crossbar onto the top netting.

That it's disappointing is mostly a good sign---it's a match that Liverpool could and probably should have won. Wasted chances again leave Liverpool wanting for more, and while their response after the equalizer was admirable, they couldn't convert when they needed it most. And, as we've become frustratedly used to, lax defending on a set piece proves to be a major weakness. So on a day when there were clear positives, it's the same old negatives that prove to be Liverpool's downfall. 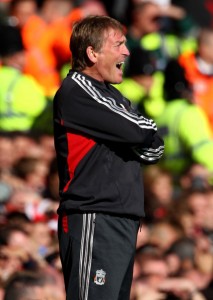 The most glaring positive was the return of Steven Gerrard, who was all over the place during the 90 minutes. He sunk deeper early to provide support and dictate play, but he was a major driving force late in the match and provided the urgency that Liverpool has lacked at times this season. High marks for Jose Enrique and Martin Kelly as well, with both effectively shutting down United's play from the wide areas and the former getting up and down the left at will. Better stuff from Charlie Adam today, who looked more composed and less scattered in midfield, and again delivered well from set pieces. Still a ways to go when it comes to defending, but positive in more than a few areas. Jordan Henderson was a major bright spot off the bench, nearly getting the winner on two separate occasions and giving Liverpool a forward-thinking presence in central midfield.

I'm prone to excuse Lucas' struggles as a result of his late shift on Tuesday night and the long travel day Wednesday. It was his first bad display of the season, and while Luis Suarez had similar circumstances and still performed well, the amount of running Lucas does was handicapped by tired legs, and his soft booking in the first half limited his ability to be physical. Martin Skrtel's late lapse on Herndandez's goal is easy to point at, but he was solid alongside Jamie Carragher in the first half. I'd still prefer Daniel Agger, and hopefully the Dane's omission today leaves him well-suited to come back into the side against Norwich next week.

Slightly puzzling that Dalglish didn't use Agger or Craig Bellamy at all today, particularly after United got the equalizer. The match was wide open, and while Liverpool had enough chances to make it a moot point, both could have had a role to play. That aside, I think it was a match from which Liverpool can come away feeling positively. They had the upper hand in nearly every regard, and missed chances and a set-piece failure don't entirely erase the good sentiments from the day. Plenty of progress to be made, but hopefully it turns out to be yet another indication that there's something special in this squad.