Share All sharing options for: Liverpool 2, Everton 0: A Derby Win is A Derby Win

For all the excitement and controversy early in the match, Liverpool end up easing to victory, with both of their forwards getting on the scoresheet together in a league match for the first time since they arrived at the club in January. It's difficult to draw many conclusions from today, partially because of Martin Atkinson's decision to send off Jack Rodwell early in the first half. But it's win at Goodison, and that's always going to be good enough for Liverpool.

We got the change we had hoped for in the run-up, as Dirk Kuyt came into the side for Jordan Henderson. The rest of the squad was unaltered from the victory over Wolves; few options existed other than Martin Kelly, Jamie Carragher, Martin Skrtel, and Jose Enrique at the back, and Kuyt joined a front six that had Lucas and Charlie Adam partnered in central midfield, Stewart Downing on the flank opposite the Dutchman, and Andy Carroll and Luis Suarez up top. 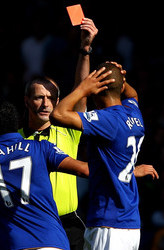 As far as derby openings go, things were lively but fairly balanced, with both sides creating great chances early. Danger from Everton's early flurry of corners was avoided, and Stewart Downing's pass to Luis Suarez was just a touch too heavy to give the Uruguayan a chance at goal. He'd have a free header minutes later from Dirk Kuyt's cross but could only manage to tamely nod it at Tim Howard, and in a flash Everton had a Tim Cahill headed effort barely tipped over by Pepe Reina.

The hosted pressed immediately after Cahill's effort, and had the better of things for a ten-minute spell with Liverpool mostly on the back foot. All of that changed on 23 minutes, however, when Martin Atkinson gave Jack Rodwell a straight red for a clumsy-looking challenge on Luis Suarez around midfield. Suarez certainly made the most of it, and it looked to be a yellow at best even on first glance, but subsequent replays showed that even a yellow might have been harsh. That a red card found its way into a derby wasn't entirely surprising; it was Atkinson's utter lapse in judgment that was so shocking given that he was stood no more than five yards from the incident.

As expected, Liverpool had more time and space from that point on, and they again found themselves with a number of chances as the half progressed. The best of the lot was obviously the penalty won by Luis Suarez on the edge of the box after Phil Jagielka swiped a leg underneath him. It was a clear penalty, and with Kuyt into the side for Henderson, we were certain it'd be 1-0 Liverpool. So then Howard makes a stretching save to his left on an averagely-struck penalty from the derby hero, and all of a sudden the hosts were galvanized. That they escaped Charlie Adam's 45th minute thunderbolt only strengthened them, as the left-footed drive crashed off the crossbar from 25 yards. 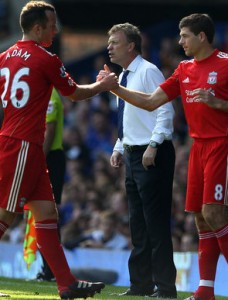 Most of the second half didn't look like a match with ten men facing eleven---Everton did admirably and pressed when they could, but Liverpool lacked any sort of cutting edge and looked destined for a disappointing draw. A pair of substitutions changed all that, though, with Steven Gerrard coming on for Charlie Adam and Craig Bellamy replacing the suddenly anonymous Stewart Downing. The impact of both was felt instantly, as Gerrard delivered a dangerous free kick that was headed over by Suarez, and Bellamy burned down the left twice in a matter of minutes.

The second streak led to the opener, as the Welshman played it forward for an onrushing Jose Enrique, whose low cross found its way over a ducking Dirk Kuyt to Andy Carroll. The big man made no mistake hitting it on the half-volley past Howard, and the £35 million bust of a striker had his first goal of the season and his first Merseyside Derby goal. The joy was evident, and it was a relief to see him get off the mark on the season.

There weren't many nerves from there, and any left were put to bed when Luis Suarez curled one past Tim Howard after Leighton Baines and Sylvain Distin made a hash of their attempts to clear. The final minutes played out tamely, and Liverpool had their derby victory after two disappointing results last season.

The joy from the result, and the goal for Andy Carroll, are somewhat muted by the struggles that Liverpool experienced for much of the match. They looked frustrated and lacking creativity against ten men, and while there's an argument to be made for the occasion and some chances gone begging, it was anything but overwhelming from Kenny Dalglish's squad. Vastly improved with changes made, though, and possibly a glimpse of things to come when the captain's at full fitness.

As usual, there were a few standout performances---Jamie Carragher was mostly excellent at the back and was particularly effective when heading clear, and with a few shaky performances leading up to today, it was nice to see him turn out a strong display. Jose Enrique was similarly impressive in defense and provided the cross for Andy Carroll's opener; he had a couple of bobbles here and there, but he continued to assert himself as one of the better left-backs in the league. Lucas was Lucas, covering ground up and down the pitch and breaking up play from open to close. And Dirk Kuyt's return unfortunately included the missed penalty, but he was industrious as ever, setting up Suarez for the clear header in the opening minutes and knocking back to him in the lead-up to Liverpool's second.

It was a strange collection on the other end, with each of Stewart Downing and Luis Suarez struggling to have much influence on the match. Suarez got his goal late but looked off the pace, and it looked like a step back in his partnership with Andy Carroll, who, aside from a few headed efforts prior to his goal, hadn't found a way to extert any influence either. Downing was missing for the first time this season, and Liverpool looked far more dangerous with Bellamy on the pitch late. Charlie Adam's day was improved in some areas---more reserved, less clumsy---but continually frustrating in others, as his ability to mark or get in a tackle is mostly absent. Unfair to directly contrast his impact (or anyone's for that matter) with Steven Gerrard's, but if they're vying for the same spot, there's never a doubt who gets the nod.

Most days we might lament the struggles a little more, and with two weeks to go before United visit Anfield we probably will. We can't ignore the unfortunate impact that Martin Atkinson had on the match either, and that'll be discussed plenty in the coming days. For now, though, it's a win in the derby, and we can enjoy that for at least a little while.