United 1, Liverpool 0: The Earth is Not a Cold Dead Place

Share All sharing options for: United 1, Liverpool 0: The Earth is Not a Cold Dead Place 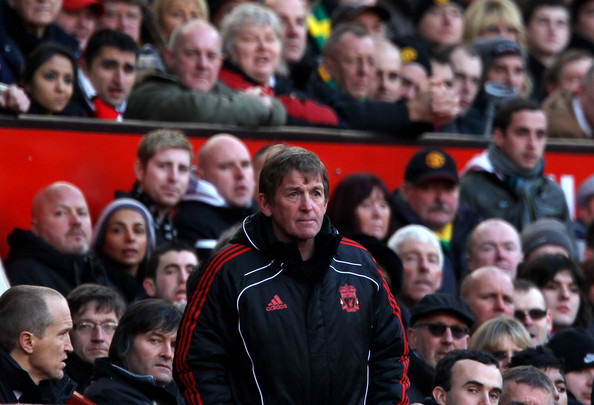 Out of the FA Cup, but a certainly a performance worthy of praise.

As predicted, today ended up being all about Kenny Dalglish's return---once the Proactiv ads ended that's all we heard about. Not negative of course, as it's what most of us wanted. It was as close to surreal as things can get in football, and it was a joy to behold.

But as the match progressed, it also became all about the type of display that Liverpool were turning in. From the time the team sheet was announced we hoped things were changing, and from minute one to minute ninety it was clear that something was quite different.

Today Liverpool were aggressive and positive for one of the few times all season; they pressed high up the pitch, closed down quickly, and looked like a squad that believed they were capable of winning the match. Clear-cut chances were few and far between, but at Old Trafford and down to ten men for the entire second half, it was always going to be a difficult ask. This one wasn't entirely about the result, though, and hopefully today is a sign of better things to come.

The football itself was scrappy and fiery at times, and the opening minutes did plenty to set the tone. A medium-range ball over the top was collected by Dimitar Berbatov on the right side of the penalty area, and while Daniel Agger closed down relatively quickly, the Bulgarian was a step ahead and able nudge on. There was never any contact, and I won't listen to any argument to the contrary, but United were awarded the penalty due to Agger's lazy leg, Ryan Giggs blasted past Pepe Reina, and United were on their way thanks to Howard Webb's incompetence (and resistance to asking his assistant for help) and Berbatov's floppery.

Obviously not a dream start, but there was a newfound hope in the past 24 hours that made it seem like a resurgence was possible.

And, for the most part, Liverpool did just that. The aforementioned approach emerged once the early pressure from United subsided, and Liverpool were able to work their way back into the match. They were strong from back to front but struggled to create chances; it wasn't as though United were much of a threat past the first few minutes, though, and Howard Webb debauchery aside, Liverpool were the better side for most of the first 45.

Unfortunate that the first 45 also included the Steven Gerrard sending off, which merits a brief discussion at the least. In the moment, I thought clear yellow and nothing more. Rafael had a similar challenge on Raul Meireles just minutes earlier and didn't even hear a whistle, Gerrard won the ball, it was poor timing, etc. In the time since, I think my Howard Webb Hate Goggles might have informed my opinion a bit too much. It was a bad challenge at best, and in any other circumstance I wouldn't have been so vehement in shouting the decision down.

That provided Liverpool any and every opportunity to curl up and wait for the final whistle---hell, it would have almost been expected. Down a goal and a man at one of the more hostile grounds they'll encounter, a regression to a tightened, counterattacking style would have been understandable.

But this was different across the board. Liverpool continued to press, and their intent was signaled by a dual substitution at the 60 minute mark---Ryan Babel on for Maxi Rodriguez and Jonjo Shelvey on for Raul Meireles. Both were positive substitutions, made at a time when they could make an impact, and both gave the impression that Liverpool weren't here to survive. The substitution of David Ngog for Fernando Torres was similarly inspired, as the Spaniard struggle to influence the match yet again and had a difficult time alone up front, particularly after Gerrard was sent off.

Fabio Aurelio's free kick in the 65th minute proved to be the best chance for either side (other than a goalmouth scramble marked by five Pepe Reina saves in a matter of seconds) in the second half, and ultimately it marked the Liverpool's debut and exit in the FA Cup. Disappointing result in that it was a loss, but I don't think I'm alone in saying that the performance and change in atmosphere far outweighs result.

I thought we also saw some quality individual performances, led by Martin Kelly yet again. Called on late, he more than held his own against Ryan Giggs and Patrice Evra. On a few isolated occasions Giggs got the better of the young fullback, but on the whole it was another high-level performance from Kelly. Plenty of discussion about him pushing past Glen Johnson in the pecking order after today, and I can't say that it's unwarranted. Seems like every time he's called upon he delivers, and today was no different.

The rest of the back line was effective, with Martin Skrtel turning things around from the Blackburn disaster and Daniel Agger making an impact both getting forward and at the back. Not a vintage performance from Aurelio, but serviceable and still miles better than Paul Konchesky (missing from the squad completely, no less). And when they needed it, Pepe Reina stepped in with a number of fantastic saves, including the aforementioned lightning round midway through the second half.

Midfield was a slightly different story---both Maxi and Meireles deserved to be taken off, and the latter's partnership with Lucas lacked most of the cohesion we've come to expect from them. Lucas still worked his socks off, though, as did a slightly more influential Dirk Kuyt. Shelvey and Babel were positive after coming on, with the latter getting a shot on goal within a minute and the former winning a number of tackles and pushing things along. David Ngog tried to make the most of his ten-plus minute cameo after replacing Torres in the 80th, but in the end it was too tall an order to break down a tough United defense.

So it's a loss, it's one less chance for a trophy to salvage some dignity from the early season's failings, and it's not the start Kenny Dalglish would have hoped for. As far as negatives go, that's it for me. Yes, some individual performances were lacking, but that's to be expected.

This was a completely different Liverpool matchday---one I found myself looking forward to and actually enjoying. The impact of yesterday's events hopefully spur the club forward; early returns make it seem that's the case, but only time will tell. For now, I'm contented with watching a Liverpool side that look confident in their ability to win football matches. Lord knows it's been awhile.

Hope you're all able to enjoy the rest of the weekend, and leave your reactions below.