Fernando Torres Moves On, Plus Any Further Updates

Share All sharing options for: Fernando Torres Moves On, Plus Any Further Updates

Well, it's official, LFC have agreed upon a fee with Chelsea and Torres is now free to discuss personal terms and undertake the medical.

For all that it seems like only yesterday that Torres was Liverpool's savior, destined to go down as one of the all time greats, looking back it's been a rather sad, slow decline over these past eighteen or so months that has led to today. The constant injuries, the need to defend him against constant accusations of sulking, the whispers that it was only a matter of time until he left. And now he's gone, and FSG have managed to bring in a pair of younger attackers to replace him with, providing yet another point of break from the struggling, tumultuous club that seemed on life support only a short time ago.

So I'll miss him, or at least I'll miss the Torres who burst into the league with his first league goal against Chelsea; the lively Torres who despite injuries played a major role in almost getting Liverpool to the League title. I'll miss the individual moments of brilliance, like the dipping half-volley against Blackburn, or the turn against Madrid. In the end, though

, I was always expecting it, always half prepared for him to leave, and though his timing was absolutely horrendous and did much to tarnish whatever remains of his still unfinished legacy as a football player, the club moves on. The new owners showed they had the ambition he claimed he was always waiting for. So he moves on, but so do we, and given what in retrospect was a relationship clearly in decline as well as the immediate efforts to rebuild the squad, in the end it is a far less traumatic separation than I would have expected.

Amongst recent transfers it feels much more like the Mascherano situation than the Alonso departure, and in the manner of his leaving he has managed to throw back the loyalty of the Anfield faithful and leave them feeling cold. He's gone; and we all move on. The club is bigger than him, and we now have owners who are clearly gunning for success. We have Dalglish back in charge and bringing back pass and move football. We're moving up again, and meanwhile Chelsea is slipping further away from the title. So while I won't be wishing the striker any luck with his new club, and in fact hope he struggles for form and has trouble fitting into an over-crowded front line with Drogba--frankly, I hope he never wins a thing with them and goes on to watch Liverpool capture silverware in his absence as Owen did when he foolishly left--at the same time I don't truly feel the rage of the betrayed. In fact I might even feel a little sorry for him, and for his short-sighted foolishness. For in the end, he will lose more from the events of the last few days than we will.

Fernando Torres, after all, hasn't truly been the Fernando Torres everybody likes to remember for going on two years now, and if he feels as though he's moving on from Liverpool, well, on this end it feels a little bit like Liverpool's moving on from him. Thanks for those first seasons; shame about the last two. We've got new owners, a new manager, and now a couple of new attackers to take the his place, and to make one more break from the last 18 months and the Hicks and Gillett era in general.

At one point he could have gone down as a legend, and despite recent struggles that's what the fans so much still wanted him to be. Instead he'll now be remembered as a good player who had two great years, was injured a lot, never carried the club to silverware, and whose actions in the end gave lie to all the talk of caring for the fans with a hideously mis-timed transfer request. But the club will move on and become stronger. It has already moved on, and is quite likely already stronger than it was at this time last week. And meanwhile Torres is left as just another mercenary for Abramovic.

Updates over the last couple of hours of this transfer window will follow.

Update: On Sky, Blackpool chairman Karl Oyston has said they aren't selling Charlie Adam, full stop. I guess they really did want a one in front of it, and Liverpool wasn't willing to go above the £8M or so that was their final offer today and that everybody thought had been accepted.

Also, the Suarez deal has officially been completed with the player signing a five and a half year deal with LFC. I'd link you to the official release, but with their overloaded server the official site only has one page right now. For the time being, you can see it here, but that may not last.

Update: Well, that's 11PM in England, midnight in Europe, and the end of the transfer window. As mentioned by Rosco in the comments, Andy Carroll has officially signed on. Like Suarez it's a five and a half year deal for our newest record signing, one who eclipsed Suarez as our record signing after his short time on top having topped Torres' fee.

It's always possible there's something else coming if the paperwork was completed before the deadline, but it looks as though this wraps up the January market for LFC. 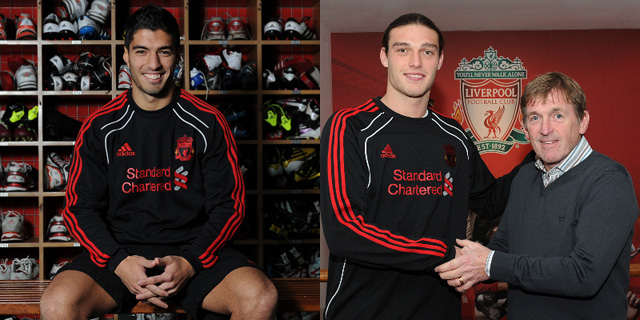