Share All sharing options for: Building a Better Triangle

**With no real breaking news on the transfer front and Ed and I feeling as though there's little more to say that hasn't already been said, it seems as though it wouldn't hurt to bump this post on tactics back to the top of the page. It went up while people were already occupied with the initial Torres rumours, and an hour later the Suarez story broke and completely buried it. With no Liverpool match this weekend, at least it might be something other than a certain want-away striker to worry about until any more real news does break**

The match against Fulham, for all that it saw Liverpool capture all three points, may well have been the worst performance by the side in the as yet brief return of Kenny Dalglish. That Liverpool managed to win in spite of this can be taken as reason for hope, as anything that helps to raise this still somewhat fragile side's confidence can only be seen as a positive, and there are times when winning a match you probably didn't deserve to can be as much of a boost as running up a baseball score. With that said, hoping to earn points and rise up the table on the back of ill-deserved victories would be beyond foolish, and so in spite of the win there have been questions about Liverpool's less confident, less fluid, and less controlling performance. Particularly in what had been a previously impressive midfield triangle.

In the immediate aftermath of the match, some seemed eager to combine an at times anonymous performance without the ball with an early attempt at a Gerrard-esque Hollywood ball that went wrong, and in so doing shove much of the blame on the much maligned Christian Poulsen. Meanwhile, with Gerrard returning to himself attempt the occasional Gerrard-eqsue Hollywood ball, it might be easy to complain that it was Gerrard who was lazy in defense and carefree in possession. After all, there must have been a reason why a midfield that had looked so fluid and controlling, even in its early defeats, suddenly looked so easily overrun. Looking deeper, however, neither of those complaints rings true, at least not entirely. In fact it might even be fair to say that taken as individuals, each of Liverpool's three midfielders on display against Fulham had quite strong performances. Yet as a whole it was that midfield that failed to impose itself on the game for long stretches, often allowing Fulham to build possession centrally and gather momentum. Despite the numerical advantage in the middle of the park, and despite games from each player that were at the very least acceptable, Gerrard, Meireles, and Poulsen found themselves dominated and ineffective for long stretches. 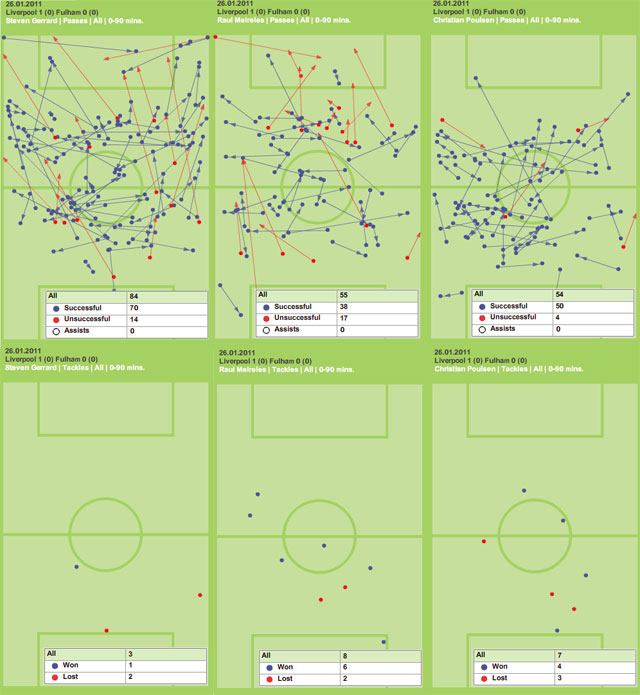 The chalkboards confirm that in the run of play Steven Gerrard took on a defacto free role despite more often than not playing deeper than Raul Meireles, spending most of the match in and around the center circle. Meanwhile, the Portuguese player again looked slightly less effective as a playmaker when receiving the ball with his back to goal against a more pressing opponent, which had previously been the case in matches against Everton and Blackpool. In the most recent previous match against Wolves, a side that had been unable to consistently pressure him as he set up between the defensive lines, he had looked downright dominant, but things weren't nearly as smooth against Fulham as the opponents focused on closing him down quickly. As for Poulsen, he was actually exceptionally tidy in possession. However, the tackle statistics back up the impression, gained upon reviewing long stretches of the match, that he was entirely anonymous in defense--he switched the ball commendably, fulfilling half the role of a holding midfielder capably, but whether it was down to a lack of pace or a lack of positioning, when Liverpool didn't have the ball he was a non-factor despite being the most defensive of the trio.

Still, looking at their chalkboards re-enforces that individually none of them had particularly bad games. Instead, the problem was that none of the games they were individually playing combined to create an effective whole, leaving a midfield trio that was less than the sum of its parts. Or: They weren't poor, they just lacked proper balance.

In this particular match Meireles would have been helped by being able to drop back more often as he had in Dalglish's return to management against United in the FA Cup, a display that had seen Meireles and Gerrard switch roles freely, but either through instruction or inclination Gerrard seemed less eager to move forward with quite the same determination on his return from suspension. Still, that Gerrard's passing was quite solid, even exceptional given the sheer number of passes attempted and the number of those that were high-risk, is something that does have to be reiterated. Unfortunately, it also has to be highlighted that he showed an at times Charlie Adam-like indifference to the defensive side of the game that hurt Liverpool's ability to reclaim possession when Fulham got the ball and looked to build momentum. To some it might initially seem to matter little where the nominally "free" player lines up, but by having a player who isn't one of the furthest up the pitch unchained from the heaviest defensive responsibilities as Gerrard appeared to be makes it, on this day, Meireles' responsibility to both track back deeper than Gerrard when he sees the captain needs to be covered for and then to sprint ahead in attack, which is hardly an efficient or sensible sharing of responsibilities. Having Gerrard meander around the center of the pitch, even if he was pinging it about with consummate ease, was far from ideal when it meant that the more advanced player had to constantly zip back past him in coverage when the opposition got the ball. That Meireles had more tackles, successful and otherwise, in his own end of the pitch while playing as the most advanced midfielder is a real indictment of either Gerrard's defensive efforts or his willingness to get farther forward.

Meanwhile, while Poulsen kept possession and switched play entirely effectively, he provided hardly more defensive steel than Gerrard from what was supposed to be the most defensive of the midfield roles, and when you put all three performances together like that it is hardly surprising that without the ball Liverpool often found itself overrun in central areas at home despite having an extra man there. None of them had a bad game, but against Fulham it was simply not an effective unit. It was missing an anchor. 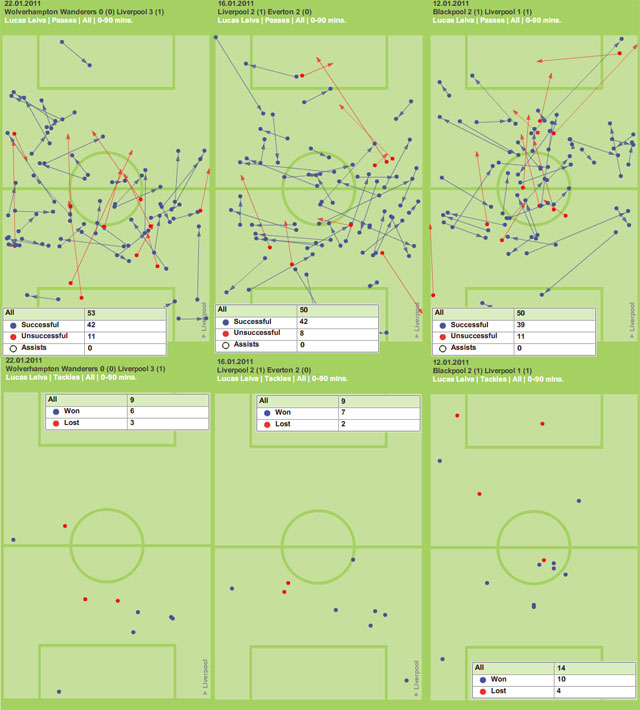 In a three man midfield, Poulsen, Gerrard, and Meireles only managed to effectively cover two of the required roles, lacking a true base to their offset triangle. Despite solid individual displays, the trio simply lacked the proper balance to be wholly effective. It is a balance that based on most of the matches this season one would expect Lucas to have brought to the table, just as he had against Wolves and Everton and Blackpool. He may not be an all action, no plot firebrand like Javier Mascherano was, but his positional sense, footballing IQ, and exceptional workrate have to all appearances allowed him to close down passing lanes, block off attackers, and at times almost single-handedly cover the base of midfield where less tactically astute players like the Argentinean who continues to sit behind Sergio Busquets at Barcelona--or like, it has to be said, Steven Gerrard--would need that bustle and physicality not because it's a strict necessity in order to defend well from midfield in the modern game, but because of often being less than ideally placed to defend against the opponent. Crunching, sliding, last-ditch tackles from players caught out of position may be satisfying on some levels, but it is hardly a sin to be a smart enough player that one will almost never be required to throw such a challenge. And, as the statistics back up, when he does need to stick a boot in, the at times slight looking Brazilian manages to get it done far more often than not. What the match against Fulham showed on Wednesday was just how much the current Liverpool side need him in the starting eleven, especially looking back at a string of strong performances as the midfield's anchor in comparison to a match where none of the players who actually were on the pitch quite managed to fill the role he had in those past games.

Again, as always in football, it turns out not to be about looking for the best and worst individual performances so much as it is about looking for how the performances of ten individual outfield players combine to produce the best performance of the entire side. Balance, cover, protecting against one player's weaknesses and supporting another's strengths; all things that are just as important as having a player or two around who can grab a match by the scruff of the neck and impose his will. While it certainly didn't seem like it at the time, in retrospect Fulham turned out to be a shockingly clear example of the nature of team vs. individual in modern football, and of the need for an effectively balanced side if one is to expect long term success rather than simply hope for lucky results.

The three points didn't hurt, either.