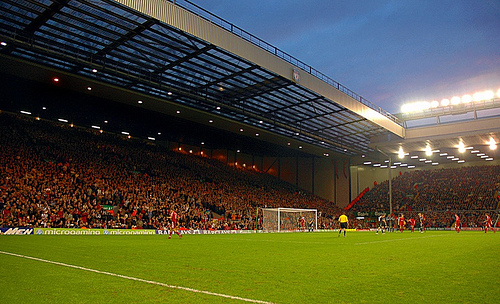 Match live on Fox Soccer Channel in the US.

Only notable absence is Lucas, who apparently picked up a slight thigh injury in training. Nothing too serious, but enough to keep him out of the squad today. That staves off the questions about how Steven Gerrard, Raul Meireles, and Lucas fit in the squad together; today we'll likely see Christian Poulsen tasked with holding responsibilities while Gerrard and Meireles figure out who's getting forward when. It's an exciting prospect, but as I mentioned yesterday, one that's going to take some settling.

And in non-Liverpool but still worth reading news, Richard Keys gave his exclusive to talkSPORT this afternoon, and as you can expect, it was rife was non-apology apologies, blaming of everyone and anyone, and alluding to devious forces that operate in the shadows with the sole purpose of conspiring against those of us daring enough to proclaim that anything with boobs (not moobs, mind) is too stupid to understand a game that's got precisely six rules. Tough times for Richard and Andy, they've been so very wronged.

Also worth noting that when you type in "Keys apology" on the Google, the first link is to a story from October about how MTV f*cked up the award they gave the Black Keys for Best Video, printing "Black Eyed Peas" on the plaque. Not like that award or MTV is actually relevant anymore, but it's surely enough to make you question whether it's antiquated concepts of gender roles or the Black Eyed Peas that poses more of a threat to our modern world.