Share All sharing options for: Liverpool 3, Wolves 0: Finding Their Footing 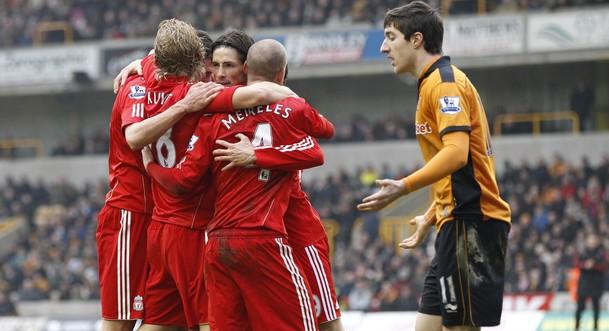 Liverpool start to put it all together in the win over Wolves.

Well that was a bit more like it, wasn't it?

In the days leading up to the match I was, admittedly, a bit nervous about how things would play out today. Things had been trending positively for Liverpool under Kenny Dalglish, but, as I mentioned in the match preview yesterday, the need for points was starting to trump the need to wash the bad taste out of our mouths after six months of lowered expectations and disappointment.

I watched the match a bit hesitantly, then, even after Fernando Torres slid home Liverpool's first. Excited about the early lead and the positive play, but still mindful of the slip-ups after taking leads against both Blackpool and Everton. It was a perfectly timed run from Meireles and an even better ball from Christian Poulsen to set things up, and there's no doubt about Torres' ability to find the net with that type of gift.

That didn't completely settle the nerves, though, and Wolves stuck to their plan---battering Liverpool with every chance they got and trying to attack the central part of the defense through the air. The latter part of the approach was ultimately abandoned, but the physical approach remained a constant, and Liverpool came away from the first half with two yellow cards (Torres and Christian Poulsen) and a handful of minor knocks. They were a goal to the good, but they clearly needed more.

Wolves came flying out of the gate in the second half and almost immediately had a chance after some good work down the left, and they continued to pressure for a decent spell. Unlike at Anfield against Everton, however, Liverpool were able to withstand the opposition's efforts, and the occasional break still indicated they were after another.

And it eventually came, although it was mostly out of nothing. Daniel Agger's launched free-kick from Liverpool's half was headed away by Christophe Berra, and as he was prone to all day, Raul Meireles was the right man in the right spot. He delivered what's easily the goal of the season, hitting a dipping volley into the top corner past a frozen (and well-performing) Wayne Hennessey. It was the goal we've waited for from Meireles, but more importantly, it was the goal we were waiting for against Everton and Blackpool---the one that put Liverpool out of reach of the opposition.

From there it wasn't a case of Wolves conceding, but Liverpool were visibly lifted and continued their positive play. The home side flirted with chances at times, all of which were rebuffed either by Pepe Reina or an improved back line. There was nearly a third for Liverpool almost immediately after Jonjo Shelvey came on for the impressive(!) Christian Poulsen, but the youngster's shot sailed wide after he had done well to control another quality ball from Meireles.

That third would come late, and it would come in a move that was both the capper for the day and a signal to the end of the first six months of the season. Liverpool crafted a selfish, pass-and-move spell of possession that finally led to a break down the left for Dirk Kuyt, who bundled across the box and, in occupying two defenders and Hennessey, freed up Torres to crash home. A deserved goal for the build-up, a deserved goal for the performance, and a deserved result for Kenny Dalglish and Liverpool.

It was one of the first times all season that we can come away feeling like Liverpool hit something resembling a stride. There have been similar scorelines this season against Villa and West Ham, but both of those came against opposition that barely had a pulse, not to mention that they came at Anfield. This was a dominant performance away from home against a resolute opposition (regardless of their place in the table), and Liverpool came away with both the performance and the result for their work.

The team performance is obviously the most important part---they seemed to gel in a way that they hadn't done much of this season. They pressed Wolves relentlessly, got forward in numbers, and when needed, they defended well as a team. That last bit may be the most impressive, as that's been the culprit both collectively and individually in recent weeks.

There's plenty of individual performances to pick out as well, with Fernando Torres and Raul Meireles grabbing most of the headlines. It's plenty justified---Torres continued to be active up front and showed plenty of intent, and most encouraging is the workload that he's carrying under Dalglish. Meireles was an absolute nightmare for Wolves---his vision, passing, and movement were in high gear for most of the match, and the volley didn't hurt either. No telling where he goes from here positionally, but if he can turn in shifts like this throughout the midfield, he's going to be tough to match.

They didn't do it alone, as Lucas turned in another high-level performance, Christian Poulsen had his best match in a Liverpool shirt, and Dirk Kuyt and Maxi were both active from the wider areas. As I made reference to, Skrtel was miles better than in recent weeks, and while it still wasn't perfect, it was part of much better team performance defensively. And when called upon, Pepe Reina was once again fantastically reliable. But you knew that already.

Three points (finally) doesn't completely change the season, just as a win against a side in the bottom three doesn't mean Liverpool are back among the Premier League elite. But results like this, on the backs of consecutive improved performances, can start to move Liverpool in a more positive direction, and right now that's all we can hope for.

Hope you all enjoy the rest of you weekend, and try not to crash 101 Great Goals re-watching Meireles' goal, okay? I've already tried, it just keeps replaying. Glorious.