Looking Back at 2010 on the Liverpool Offside: August to October

Share All sharing options for: Looking Back at 2010 on the Liverpool Offside: August to October 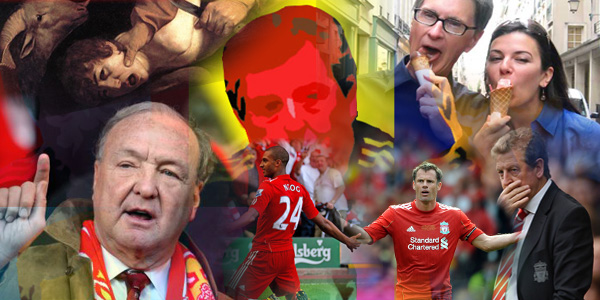 "Unless I completely missed the point, July closed with something resembling optimism--the 2-0 win over Rabotnicki to officially start the campagin wasn’t grounds for title predictions, but it seemed to be wholly positive despite the low level of the opposition. Then, of course, the rest of the season has happened."

And then, as Ed said, the rest of the season happened...

Worries on the Pitch:

Things didn't go completely sour straight away, even if that first Premier League match against Arsenal surely had its share of bad omens. Down to ten men after a foolish Cole challenge that set the tone of frustrating disappointment which has described his career to date in red, Liverpool still managed to take a lead into the final minutes on the weight of an impressive N'Gog strike and a strong final performance by Mascherano before Reina got the sun in his eyes.

That was just about as good as things got for Liverpool, as soon afterwards Aquilani found himself shipped back to Italy, while Mascherano sat out the match against Manchester City on his way to Barcelona, and Insua got swapped out to make room for Paul Konchesky.

Speaking of Manchester City, the absolute pants-shitting against the Citizens just about finished off any hopes people had that Roy Hodgson might be a quick fix who would put his arm around a few shoulders and steady the ship, with the almost immediate downfall of his preferred 4-4-2 formation:

Roberto Mancini and his side had it completely right, and Liverpool were embarrassed. The possession battle was comical, there were no chances for the interplay that we had hoped for between any of the forward men, and no real glimpses of hope for Liverpool to claw back into things. I ended up cursing myself for the naïveté of even suggesting this Liverpool side could stay competitive with such a shift.

If this is going to be the formation Hodgson uses (which history would indicate), then you’d have to think that more money will be invested in wide players with the pace to compensate. But this is Liverpool, and the promise of transfer funds has likely been greatly exaggerated, and they’re going to have to make due with what they’ve got.

And Ed was right, of course: Hodgson didn't get the money to bring in players to play his system--even if that system remains a questionable choice for any side with top aspirations--and with players ill-suited to his methods he still insisted on banging ahead with them anyhow. Even worse, in the wake of City, Ed solicited reader contributions, a move that would eventually lead to me typing this very review of the first half of the first half of the 2010-2011 season. At least when Raul Meireles signed on it meant that Hodgson and Purslow wouldn't end up with an 80% failure rate in the transfer market and there might be one good thing to come from the manager's time at Liverpool.

Regardless, the club quickly settled into mediocrity on the pitch, while Jamie Redknapp literally called people names off it, and the b-team crashed and burned against the lowest ranked opponent Liverpool had ever fallen to. Meanwhile, with news coming out that Agger had been marginalised because he was unwilling to play hoofball, I wandered by for a guest post asking if Roy Hodgson might not actually be a Liverpool manager despite his nominal position, while people everywhere began to question whether it was okay to hope for his departure or if we all needed to indeed support the manager in these tough times. Things would only get worse, and a painfully uninspired nil-nil draw against Utrecht soon turned into my first proper post, which fittingly enough was the first installment of Tuesdays With Roy, and soon afterwards an attempt to write the 4-2-3-1 bible with The Purpose of Lucas filled the days while we waited out an extended international break and wondered if things would ever start looking up again.

And Celebrations off it:

Things seemed to have fallen apart completely on the pitch, and many were beginning to pine for the days of borderline competent 7th-place finishes, but behind the scenes the ownership situation was rumbling back into high gear, and a previously unknown group from New England came out of left field days ahead of the refinancing deadline that could have seen the Royal Bank of Scotland take control of the club away from the debt-laden Hicks and Gillett.

Today’s the day. The day Liverpool’s followers around the world have been waiting for: refinancing day. And a whole lot of something is definitely starting to go down.

This was the day when the Royal Bank of Scotland was officially supposed to be able to call in the debt and banish Hicks and Gillett to the vortex. Except that there might be a two week grace period after the RBS officially calls in said debt for Hicks to run around looking for a savior in. Or the RBS could somehow still decide to refinance and then every Liverpool supporter’s head would explode. Or news could break that Hicks has already found finance elsewhere and can pay off the debt owed to the RBS in full and then every Liverpool supporter’s head would explode.

We still aren’t sure exactly what this day will hold–seeing as “this day” has hardly started in England and still isn’t quite here in America, the two places it’s most likely the forthcoming shitstorm will work itself out in–but lots of conflicting, potentially head-exploding stuff is flying all over the place.

Somehow we managed to get through the crazy week-long mess of Ed and I liverblogging the Guardian's liveblog of the proceedings, of Texas injunctions and last minute re-appearances by pizza-shop owning Hicks sock-puppets and questions of just what the hell had happened to Gillett (and it turned out that he'd gone bankrupt and had his assets taken over by a holding company), and in the end it really did manage to be the final days of Tom Hicks.

And what a happy few days those were. Of course, then that long international break ended and we were faced with having to worry about actual football again, wondering just how long it would take to get rid of Roy Hodgson, and how much damage he could do on the footballing side of things before he left. But for a time at least the war was won, champagne was popped, and the future was bright and unwritten.