Liverpool 2, Everton 2: Waiting for the Results

Share All sharing options for: Liverpool 2, Everton 2: Waiting for the Results 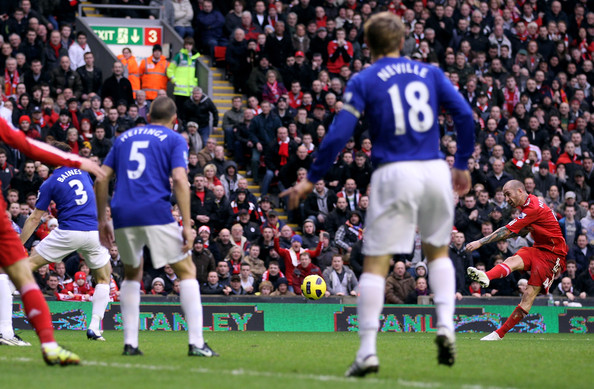 Goals from Meireles and Kuyt aren't enough as the points are shared.

For the first 45 minutes, the script seemed to be playing out almost exactly as planned. Kenny Dalglish back on the Anfield touchline facing Everton in the derby, and Liverpool playing positive, pressing, attractive football.

Intermittent spells of back-and-forth play chopped up a largely dominant first half for Liverpool, which saw the hosts take the lead on Raul Meireles' smashed effort from the edge of the area in the 29th minute. There were a host of other opportunities---Fernando Torres curled one off the far post after doing well to get past Sylvain Distin and another defender and Maxi Rodriguez crashed one off the roof when another Torres effort was saved by Tim Howard.

We got the Liverpool we've been tantalized with at times this season, and it was pitch-perfect. Heading into halftime the Reds were the deserved leaders and nearly had another just before the break through another well-worked Torres half-chance. It wasn't quite "only a matter of time," but they were damned close.

And then we got the other Liverpool we've been tormented with for most of the season for a disastrous ten-minute spell to start the second half.

Everton had the equalizer from a corner within two minutes of the restart, with Sylvain Distin beating Martin Skrtel at the far post to head between Pepe Reina's legs. Replays later in the match would show that the corner should have actually been a goal kick, but that's little consolation when Liverpool's marking (and Martin Skrtel's overall play) has been so awful.

The worst possible start only got worse after an extended spell of Everton pressure, with Jermaine Beckford slotting past Pepe Reina after Leon Osman played him through. The build-up was questionable---Victor Anichebe clattered in Martin Kelly, but play continued with Kelly writhing on the ground despite Liverpool's protests, which eventually earned Reina a yellow.

At that point Liverpool started to find their bearings a bit, but they initially struggled to impose themselves on an Everton side that was flying high. They slowly worked their way forward, though, and in the 68th minute they leveled. A Raul Meireles free kick eventually fell to Martin Skrtel at the back post, and after the Slovakian whiffed, Maxi darted in to the rebound and was dragged down by Tim Howard. Dirk Kuyt, scorer of four derby goals prior to today, stepped up and sent Howard the wrong way, drawing Liverpool level.

Neither side had any great chances after that---both were able to get the ball into dangerous areas and had a share of set pieces, but the final minutes were ultimately uneventful. Not how this one was supposed to play out, and another disappointing result for Liverpool.

As I mentioned, it didn't come without its positives, and the bitterness of the result can't wipe those away. At times in the first 45 minutes Liverpool were nearing top gear, with Torres covering ground and looking to regain his eye for goal. Martin Kelly continue his stellar play at right back, Glen Johnson looked a bit more settled on the left, Dirk Kuyt looked to regain a bit of form, and Jay Spearing and Lucas were both solid in midfield.

In fact, I'd say that the only real worries in terms of personnel are focused on the reasons for Daniel Agger's substitution at the half and the continued woe of Martin Skrtel. We can expect news on the former sometime soon, but questions about the latter aren't so easily answered. He seemed to recover a bit at Old Trafford alongside Agger, but today was another dismal day for the Slovakian. Eventually you'd have to guess that he takes a spell on the bench, and if it's not soon I'd be surprised.

A ten-minute spell in the second half and the struggles for Martin Skrtel don't change the fact that Liverpool are playing better football, and football that's deserving of better results. They're doing it with the same squad that "wasn't good enough" to do so for the first few months of the season, and that's got to be seen as encouraging.

They're also doing it with a number of younger players; Kelly's leading the charge, but we've now seen a start for Jay Spearing and three consecutive substitute appearances for Jonjo Shelvey in the time since Dalglish's arrival. It's clear that there's an investment and commitment being made in the squad that Liverpool have---Dalglish has preached plenty about the need for confidence, and at least early on, he's following through.

But there's still something missing for this squad---something that allows for spells like we saw early in the second half, that allows for silly mistakes that let the other team back into the match, that prevents them from running away with a match. Both individually and collectively, there's massive improvements to be made. For all the encouraging things we've seen in the past week, that's still worrying, and it's also probably the part that takes much more time.

In the end, though, a point is better than zero, and Liverpool look to be piecing things together. I've got faith that the results will come, it's just a matter of hoping they come sooner rather than later.