Share All sharing options for: Liverpool 2, Bolton 1: Feeling Something Again 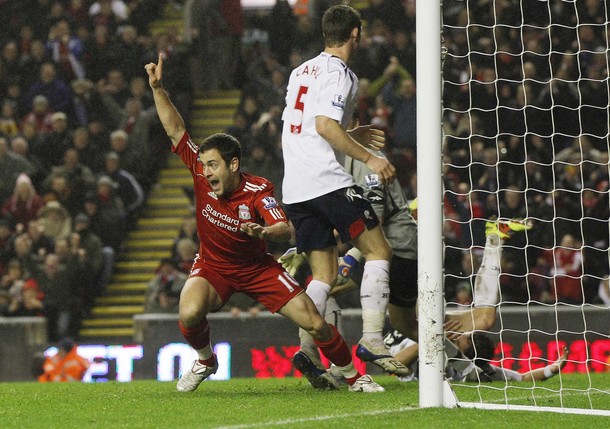 Joe Cole's bundled-home goal in the 92nd minute wins it for Liverpool.

In a season as frustrating as this, days like today are too seductive.

You enter with low expectations, pissed off at the manager and the club, just waiting for the next thing to go wrong. Then things do go wrong---one of the better players through a dismal patch gets hurt, and the fatigued captain comes on to fill a role in which he's had little success.

Things don't entirely crash and burn immediately, though, and you find that hope has started to creep back in. Just one bounce this way or that. Just one chance taken and things would be different. But instead, things go wrong again, and it's hopeless. Yeah, it was looking up, but what's the use? Nothing changes.

Of course, then everything changes. A clever bit of play and delicious delivery frees up the pissed off, disillusioned, past-it 26 year-old former world-class striker and things are on the up. They start to play a bit of football.

There's a little back-and-forth, some moments of doubt, and then, just when it seemed like better than bad would need to be good enough, the combination of skill and chance changes the conversation completely. Not for an extended period of time, obviously. But for that moment, and many of the ones on each side of it, it was just nice to feel something again.

A 2-1 win over Bolton at Anfield in front of a season-low 35,400 spectators that pushes the club to ninth in the table is not the renaissance that any of us have been waiting for. It doesn't change the fact that Liverpool have underachieved for long spells, and it's not going to change doubters' minds that Liverpool might actually be meeting expectations that have, by necessity and reality, been dramatically lowered. It also doesn't change my mind that Roy Hodgson needs to be replaced as soon as possible.

But like short glimpses against Chelsea and...well, Chelsea, it showed that if this squad is given the chance to play football, they can and will.

The decision to play Daniel Agger in central defense was not the lone factor responsible for the shift that we saw take hold (especially in the second half), but it was as good an example as any of the potential that exists in the personnel that Roy Hodgson has at his disposal. Making his first appearance since September, Agger was one of the main catalysts in moving the ball up the pitch. Not through the air, over the heads of gawking playmakers, directed at an overmatched and outmanned lone man up front.

The ball was played along the ground, through the middle and down the flanks, with movement to follow. It wasn't just Agger---Fabio Aurelio was typically involved, Lucas had another positive performance in the middle of the park, and Glen Johnson and Dirk Kuyt began to resume their effective partnership on the right side. To a man, though (and again, mostly in the second half), there was activity and forward movement, and Liverpool forced the issue about as much as they had all season.

Much of it started at the back, as Pepe Reina had far-fewer aimless bombs heading downfield. The distribution was much simpler, but it allowed for Liverpool to maintain possession and get forward in a more controlled, confident manner. The "squad isn't that good" argument showed itself to be, in many cases, largely false---the squad can be that good if they're allowed to play a brand of football that fits.

Maybe the exception to the sense-making of it all was the performance of Steven Gerrard. On Wednesday he was one of the main culprits; he looked out of position and ineffectual as a central midfielder, and it was all we could do to bemoan the idiocy of Roy Hodgson for placing him there.

It would follow that after replacing Raul Meireles in the 21st minute, Gerrard proceeded to turn in his best display of the season alongside(ish) Lucas in central midfield. He didn't try to do too much, he rarely looked out of control, and, if anything, he actually did have the calming effect on the side that the commentary team kept reminding me he "always had." His delivery on both goals was vintage---it was an inch-perfect lofted ball for Torres to slam home for the first, and the sliced cross in the 92nd that eventually bounced off a defender for Cole to poke home was dangerous and ultimately effective.

So what does this all mean beyond today?

Hard to tell. The early returns from Roy Hodgson's press conference don't seem too encouraging, as there's less of an admission of a tactical alteration and more of a "see what I can do" undercurrent. Not the type of response you're looking for from a man who just two days earlier had lamented the lack of support and engaged in a public "woe is me."

If anything, it's that Liverpool can win matches you know they need to, and they're able to play the type of football that gets them a victory by any means necessary. If they revert to the tactics we saw against Wolves and Stoke and Blackpool and Everton and etc., we'll continue to ride the roller coaster. If there's any sort of lasting changes made as a result of today's performance, though, it could be a step forward.

As I mentioned, though, more than anything it's nice to feel excited about a Liverpool result again. That doesn't involve rapturous celebrations or pronouncements of a return to glory---far from it. We know the context will catch up with us, as it's inevitably done this season.

For now, though, it's not entirely ignorant to just be happy that Liverpool won.