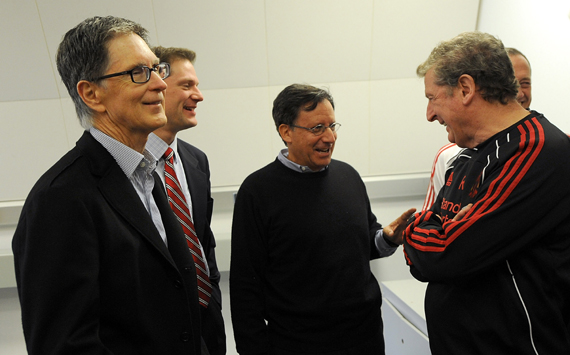 The news released earlier by the Times is finally released to the masses, and while at current it seems to be nothing more than shifting Roy Hodgson to lame duck status, at some point it's a move forward. Rory Smith at the Telegraph has the full run-down, so visit here for the complete piece. I've nipped the first part, which contains most of the important bits, below:

Fenway Sports Group, who bought Liverpool in October, had hoped to allow Hodgson to continue until the end of the season before reviewing his position, but their concerns over his relationship with the club’s fans and the team’s seemingly endless on-pitch troubles are now so great they are reconsidering their plans.

The group’s principal backers, Tom Werner and John W Henry, would prefer to make their first appointment a permanent one – seemingly ruling out a return for Kenny Dalglish, the fans’ clear choice, as caretaker – and they are believed to be examaining the credentials of a number of candidates.

They will not sack Hodgson, though, without knowing their preferred replacement is available and willing to move, raising the possibility that the 63-year-old will continue in control for the foreseeable future despite failing to win over either the club’s owners or the Anfield crowd.

The likes of Frank Rijkaard, the former Barcelona manager, Andre Villas Boas, of Porto, Borussia Dortmund coach Jurgen Klopp and Didier Deschamps, of Marseille, would all fit those criteria, though only Rijkaard – at 48, the oldest of the contenders – is currently available. Owen Coyle, too, would be both difficult and expensive to entice away from Bolton mid-season.

As I mentioned in the updates of the previous post, it's hard to tell what sort of impact, if any, we see immediately---the easy money is on nothing happening for the time being, particularly if the next appointment is a more permanent one. That's something I could live with so long as they get it right, and after the past few months that the club has endured with Hodgson at the helm, that's something FSG will need to do.

Interesting to see how things unfold from now until he actually is replaced, as this places Hodgson in the most uncomfortable of positions. And I'm not talking about the back of a Volkswagen.

By all accounts, mostly his own, he regards himself as the consummate professional, and the professional thing to do in this situation is to see out the march towards the light in the best possible way. Unfortunately that might mean the status quo (e.g., Wolves, Stoke, etc.), so maybe we hope that the vote of no confidence sends Hodgson into a "f*ck it, let's just try to score goals" mode. Or he says "piss on it" and walks away. Or he shows up tomorrow ready to play and fully kitted, form-fitting in all the wrong places, and waltzes straight into your nightmares. None of these are the likeliest of scenarios, but we can dream, can't we? Just not about the form-fitting part, perv.

So...everything's the same, but different. Bolton tomorrow, and enjoy your New Year's.