Share All sharing options for: Dirk Kuyt Injured---Mondays Have Earned Their Reputation 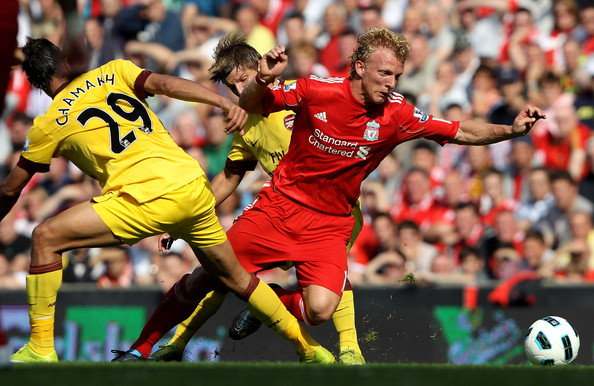 International duty further alienates itself from my good graces.

Ignoring the fact that this Monday has graced those of us stateside with a day off, thanks to 155 million working Americans!

As promised though, today brings something to complain about---turns out that Dirk Kuyt was injured during Holland's 5-0 win over San Marino:

Dirk Kuyt will be out for several weeks with a shoulder injury, according to reports in the Dutch media.

De Telegraaf has reported that the 30-year-old was sent to hospital for scans after he sprained a joint landing awkwardly stretching to reach a cross. Kuyt started Friday's 5-0 Euro 2012 qualifying thumping of San Marino but has been ruled out of Tuesday's clash against Finland.

Manager Bert Van Marwijk is quoted as saying: "He will probably have a few weeks off and at 4pm today he will step on to the plane to Liverpool."

Is it too soon to call everyone else back?

But in no way is this welcomed news ahead of Liverpool's busy September. Starting Sunday, they play seven matches in the next four weeks, with four matches in league, two in the Europa League, and the Carling Cup tie against Northampton. He'd likely have never played in the latter, but it's clear that he's one of the squad's most reliable performers when the fixture list gets congested.

He's also been one of Liverpool biggest big match performers in the past couple of seasons, and it doesn't get much bigger than the trip to Old Trafford on the 19th. If, as van Marwijk so passively suggests, he's going to need "a few weeks off," it'll be a strange sight to watch a Kuyt-less Liverpool side in action in a match that Liverpool need to win.

Maybe I'm overestimating his impact here...but I don't think so. He's more than proven his worth, and while it'd be nice if he were more pacy and had better hair, he's quite valuable to the squad. In terms of ability, he could probably be replaced. But in terms of work rate and commitment, I don't know that any player in the squad could fill Kuyt's shoes.

I suppose I'm assuming that Kuyt is part of the starting eleven regardless, so it'll be interesting to see how Roy Hodgson handles Kuyt's absence. Maxi is the natural choice to fill in but Dani Pacheco, Joe Cole, and Ryan Babel are also capable of filling the void, as is Steven Gerrard (I know, I know, best as a central mid etc. etc.). With seven matches in a month, I wouldn't be surprised to see any or all of those names on the right side at some point.

I'm holding out hope that van Marwijk's vague estimate is accurate in that it's only a few weeks, but missing Kuyt, or any other squad member, for the next few weeks would be a big blow. Getting the rest of the squad back in one piece is going to be vital---at this point, tomorrow evening can't come soon enough.

Only other news of the day comes from Roy Hodgson, who today admitted that Liverpool "are in strange times:"

"The club is up for sale and nobody knows what direction it will take if and when new owners are found. A few years ago when the situation was far more stable, the money to buy new players was available. I hope the situation will change when the club is eventually sold and owners who are prepared to invest in the club come in.

"When that situation arises I'm pretty sure that it won't be difficult for us to start achieving things again but at the moment the task is really to hang on to the players we've got and make certain we don't have a situation where we have got a total rebuilding process."

I'll be honest---there's nothing here we don't know, and I checked out when I read the phrase "strange times" and just started singing the Black Keys. So here's that: