Day 632 of the International Break

Share All sharing options for: Day 632 of the International Break 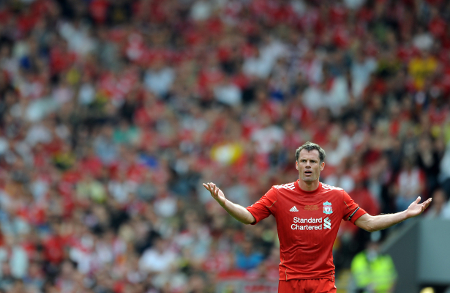 Will it ever end?

I'd say it's just me being dramatic, but I think we all know that I'm not prone to histrionics. Not one bit.

Yesterday proved to be a fitting testimonial for Jamie Carragher, as the match drew a great turnout at Anfield and was marked by the return of more than a few familiar faces.

As Sarah noted on the front page yesterday, the Michael Owen cameo was all smoke and no fire---for me, it was great to see many of the old boys return, and that includes Owen. Yes, the move to United was painful, but yesterday wasn't meant for any controversy, and it seems like the event went off largely without incident. Well done to all involved.

Unfortunately today marks a return to nothingness, though---the usual puff pieces about a new signing (Paul Konchesky's dream move! Football at the highest level! Liverpool! History! Etc!), retroactive panic about how Dirk Kuyt could have left for Inter or something, and more breath-holding ahead of Tuesday's next round of international matches.

We're left to hope that Spain have departed for Argentina by now---odds are Fernando Torres and Pepe Reina will just have to meet the rest of the squad at St. Andrew's before kickoff on Sunday after their journey to play in a completely meaningless match 7000 miles away from England. Good work, FIFA.

Anyway, lots of words to say that this post is, in fact, 300 words of filler. You've been duped. There's no matches, no news, and, perhaps what's most awkward, nothing to worry about. So far this season has taught me that Sunday is a day to be spent ruing missed chances, anticipating certain failure, or feeling generally underwhelmed. A day of rest indeed.

So let's just hope we have something to worry about tomorrow and normal service resumes. I'm banking on Tom Hicks getting drunk and driving onto the pitch at Melwood to do some figure-eights, so that should be a good discussion.

I probably won't be around if something relevant does happen---I accidentally bought Dunkin' Donuts "Dunkin' Turbo" coffee grounds, so I've got to spend the rest of my day running through walls and starting multiple projects only to abandon them mid-construction to pursue other, more grandiose ventures. I sense delirium tremens in my future.

Enjoy your Sunday everyone.