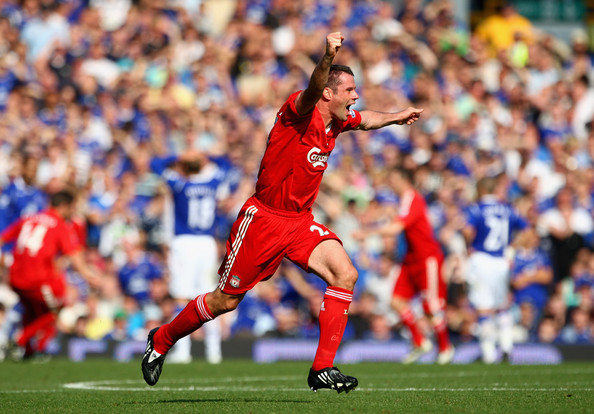 By all accounts, a great day at Anfield as the Liverpool XI won 4-1.

Updates at the end.

All proceeds from the match will benefit charities via the 23 Foundation, and a healthy crowd is expected to attend. There's also plenty of big names attached---you've no doubt heard Michael Owen is set to return, but we'll also see Luis Garcia, Jerzy Dudek, Danny Murphy, and Jamie Redknapp in action. But wait, what happens to Jamie Redknapp's hair spray if he sweats?

Even though there's been increased discussion about where he fits in the current squad, Jamie Carragher is a true Liverpool legend, and his passion for the club is, among current players, unmatched. It's been a joy to watch him in the years that I've been a supporter, and above all else he's a shining example of the type of player Liverpool needs---hard-working, talented, loyal, and unselfish.

There's no need to eulogize Carra at this point---we'll likely have a chance to watch him for a few more years (particularly if he has his way), but today serves as a great reminder of the impact he's had in a Liverpool shirt, and it's a fantastic way to raise money for some worthy causes.

For me, it's a simple thanks to Carra for all he's done for the club and beyond, and best of luck in the coming years.

**Update**---Here's the Liverpool XI in no particular order, for those of you keeping track:

**Updated** Goals as they're available (with questionable quality)