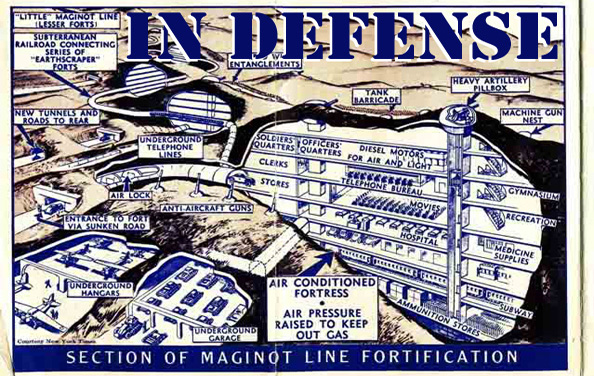 Part one after the jump, part two in the post below.

**Noel chimes in again, this time in a two-part piece about the tactics we've seen since Roy Hodgson's arrived. Needless to say, plenty in-depth and plenty to think about. The post below contains part two**

"Well, we looked good against Arsenal," says one fan. "I mean, was it just the shine of a new manager and new season, or is there actually some reason to hope the squad can regain--or just gain--a bit of fluidity and purpose?"

"Really," says another, "he got it the wrong way around playing 4-4-2 against City and Rafa's old 4-2-3-1 against Birmingham. Meet the new boss, same as the old boss."

"Even against United," says a third, not quite agreeing with those who've come before, "we were so passive outside of those fifteen or twenty minutes in the second half--just let United have its way, passive the same as Roy's been all year. Of course it's the owners fault in the end, though. Feels like it should be an unspoken truth, but you always gotta mention it, y'know?"

The United match had just ended, disappointing but somehow filled with silver linings. Something was different here than what had been seen to date in the season, even if it was easy to become too wrapped up in the loss to notice it, and it wasn't just the unexpectedly passionate push-back in the second half. A key difference, perhaps the key difference, was the team had shown width and pressure in defense. Far from being passive and positional, the fullbacks charged out, well away from the box as the United wingers came at them, often moving past wide midfielders who then sought to cover the vacated space and maintain something of an even back line while the man with the ball was pressed.

Meanwhile in the center of defense, Poulsen (at least before he became increasingly lax in his duties, leaving it to Gerrard to be the more defensively interested of the midfield pair) would often drop directly between Carragher and Skrtel, allowing them to push wider in what was often a compact, disciplined five man back line with a moving screen of three in front of it. One could question the depth of the line, allowing as it did the United players to get a flying start at it, but accepting the reality of an exceptionally deep line it at least seemed a sensible approach to clogging the middle of the park without completely deserting the wings. 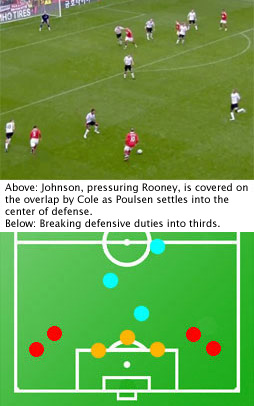 Three players providing width for the core of the defensive line, each fullback pairing with an outside midfielder in an effort to allow pressure without completely compromising shape at the back, and a screening midfielder for a back line that now included Poulsen amongst its regular members--dividing the defensive zone into three segments, with an extra midfielder to help cover the middle third and the fullback away from the ball pulling narrow to cover the outside central defender's blind spot. This was all new to Liverpool's defensive game. And it wasn't as though they set into the shape unthinkingly, since in the run of any match a defense will end up contorted into all sorts of shapes its manager doesn't intend: here they compressed into quickly and with purpose whenever the ball was pushed deep and wide into the defensive third, and when the ball then moved more centrally the wide defender would pull in and the central midfielders would push out, again showing an intent to actively pressure the opponent.

In part because the fullbacks didn't always close down the wide men effectively in spite of trying, and also because Carragher in particular was less than dominant in the air, the strategy wasn't ideal in practice. Still, that it took a wonder strike from Berbatov, a poor bit of man marking on a set play, and a reminder that for all his loyal service Carragher is not Sami Hyypia to separate the sides it seems safe to suggest that it was a better strategy than conceding the wings and looking to only have the two central defenders protecting the six yard box as has so often been the case with Liverpool this season. In theory, at least, it was a decent approach, and perhaps most encouragingly it seemed to display some actual tactical thinking to those terrified that a similar approach to what had been seen in the previous match against Birmingham would result in the squad being carpet bombed into submission from wide areas.

Far from being the same passive set up seen to date, here was something different. Even if it was imperfect at times, even if some players underperformed in their roles, here was something different. Something that seemed suited to defend against the most likely way United would try and break them down, even: a fleeting attempt at tactics. It even extended into the transition play and saw fewer hoofs from Carragher as the squad attempted to pass it on the ground and maintain possession, even if it often appeared somewhat toothless.

As such, it has to be admitted that in attack the tactics didn't look nearly as confident as in defense. Still, it was on the road against a fired up United that smelled blood, and the team hadn't been especially convincing to date. In that light it would be easy to argue that passing it around endlessly, maintaining possession even without much forward threat, wasn't an approach to be immediately derided. It would dull the environment, tire the opposition, build confidence in the players, and with a few adjustments at the half might be the foundation of a more pressing style in the second. Unfortunately, for all the calls for pass and move, many don't have the patience for it unless it's actually "pass and run really fucking quickly with attacking intent at all times." One of the people lacking this patience was Johnson, as whenever he bombed forward he would reach the end of his line and, instead of looking to retain possession, ping an ineffective cross into an empty penalty area. Certainly it's always nice when pass and move means an energetic 4-0 demolition of Real Madrid--and over the long term it is that that the average Liverpool supporter would love to see week in and week out--but it needn't always be the end of the world to pass it around rather toothlessly as Spain did for long stretches at this year's World Cup, content to tire the opposition in the knowledge that if your side has the ball then they can't score.

So: imperfect both in the back and in possession, but showing signs of tactical sense. With the cries that we were passive yet again there is a misguided conflation of passivity in defense with passivity in possession, while also implicitly dismissing the idea that passivity in possession could ever be a useful tactic to blunt an opponent. Perhaps it is convenient to bundle everything together in such a way, as it makes it easier to lump the United match in with everything else negative that's gone before and since, but at the end of the day it's unfair to Hodgson, and surely he's made enough mistakes in his tenure so far without needing to actively search for ways to turn everything and anything into a failure.

**Check the post below for the second part, broken up for purposes of space**