Share All sharing options for: UPDATED L'pool 2, Sunderland 2: Stealing Another Point at Home 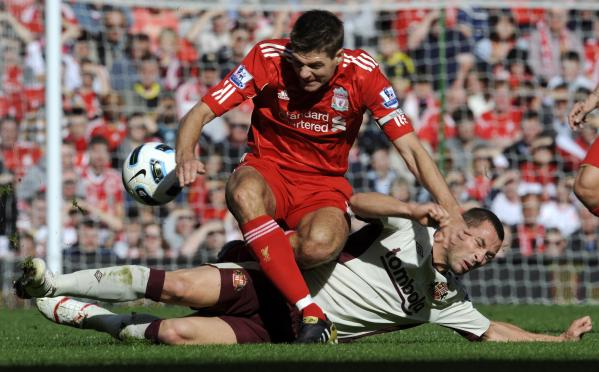 Liverpool underwhelm yet again and grab a point against Sunderland.

I've spared the paragraph below from the previous version of the post, as it still very much captures my feelings on today's match:

If my patience was wearing thin in the build-up to this match, it's now a razor's edge. Save for five minutes at the start and the closing twenty-five or so, Liverpool again gave a meek, insecure display at Anfield. Happy to concede possession for most of the first half and a good chunk of the second, they were out of sorts from front to back.

Beyond that, and what's already been mentioned by folks in the comments, there's not much more to say. There were glimpses of promises that might have lasted longer than in previous weeks, but it's largely a squad that does no convincing week in, week out. We know it's a tall task, turning around Liverpool (who just a year and half ago needed little turning), but there needs to be indications that those in charge are capable of doing so.

A few scattershot reflections before I go drink this bad taste out of my mouth:

---For about 35 minutes of the match, Liverpool looked like a team that knew what it was doing. That's still not good enough, and a large part of it has to fall at the feet of Roy Hodgson. The immediate worst-case scenario for me after the opener was that Liverpool fall back into a reserved, cagey approach, and it's exactly what happened. Absurd.

---Dirk Kuyt, while still looking somewhat rusty, was miles better than Maxi. The Argentine shouldn't come near the starting eleven in league so long as Kuyt is fit.

---Conversely, Christian Poulsen is miles worse than anyone else with a pulse. It's not just that he was responsible for the handball, which was actually the most impact he had on any part of the match. No chance that Lucas performs any worse, and as steven mentioned, the young Brazilian plays with some sort of idea about his role. Poulsen? Not so much.

---That two matches running that David Ngog is subbed on to immediate effect, and while it was blasphemy after the disaster at the Eastlands, two strikers on at the same time has been as threatening as Liverpool's looked.

---For as influential as I think he's going to be, not the best day passing-wise for Raul Meireles. Not sure of the exact statistics (and in too much of a rush to look), but I can remember plenty of times that he played one straight to the opposition. Also still not sure of what his role will be, but I think he needs to be in there.

---I stick by the Glen Johnson comment earlier---at times he's nowhere to be found in defense. On-form he's probably one of the most influential players in the side. But whether it's a result of poor performances collectively or his difficulty adapting to different faces on the flank, he hasn't been at his best at either end.

---I called for a much better performance at the back, and aside from Johnson's lax defending on Darren Bent's second, they were better as a unit. Hopefully Paul Konchesky's injury isn't serious---he wasn't lights-out by any stretch, but he's needed for depth at the very least and is preferred to the out-of-position Daniel Agger. Which kills me to say.

Fighting complacency is the biggest challenge for me right now, and even though it's been pretty much continual disappointment since this campaign began, there's always something more on the horizon. Whether it's the fact that Liverpool still have plenty of opportunities to make up ground in the table (which has been shaken up something good after today), improvement for the squad members individually, or hopes that the continued cries of supporters have influence, there's something to look forward to.

Have a nice Saturday, folks. Thanks for the comments earlier, and keep the thoughts coming.