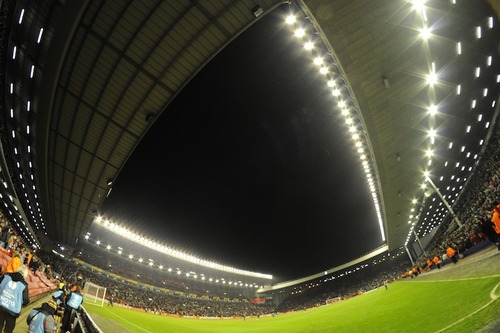 Go to the match.

The links below are purely for suggestion---MyP2P has a post up in their forums saying that only three Carling Cup matches will be shown live this entire week, so it's slim pickings. I'll make sure to update as I can, and I'm guessing there will be links for audio somewhere.

Let me just bask in correctly guessing a lineup for the first time all season---nevermind that around 7 of the names were confirmed yesterday.

But in seriousness, it is a lineup that we expected, and it could take a different shape than the one above. I mentioned yesterday that the personnel in this lineup would have the capability to overlap and interchange pretty fluently, so I'd hope that's what get. Even if it's "just" the Carling Cup, there's a lot I like about this team sheet---debuts for Jones and Wilson, Agger back in central defense, Pacheco getting a start, promising youngsters on the bench...let's hope the result matches the positivity.

As I mentioned above, it's going to be mighty tough finding a way to watch the match today, regardless of where you are in the world. If you happen to find a way to watch or listen please share the wealth in the comments.

Big news of the day away from the pitch is the recent interview with joy-boy Christian Purslow, who's apparently doing his best to worm his way back into supporters' good graces. From the Guardian:

"I can't speak for the owners but I am absolutely sure that both of them are totally committed to trying to sell the club as soon as possible. They haven't had an offer yet that they like and so I suspect that both of them individually and collectively are pursuing their other alternatives and that's their prerogative."

Regarding Hicks' rumored efforts to refinance:

"That would require board approval and the other members of the board have made it clear that's not what we want to see happen."

Regarding the potential of the club going into administration:

"Liverpool Football Club is not going bust. We have an extremely healthy business with record revenues and we are highly profitable. We have cash, we are solvent, we have banking facilities which last beyond the end of next season and we are heavily scrutinised by the Premier League.

"To achieve our Uefa licence we went through that process and they were very happy with what they saw – so I cannot conceive of a situation where Liverpool Football Club could go into administration."

He also goes on to say that, were it not for the debt incurred by Hicks and Gillett, Liverpool would be "the most profitable club in the Premier League." That simple, then? I guess you can take this at face value, but there's been little to indicate that anything Purslow says has any sort of link with reality. Something's coming down the pike, like it or not, so let's hope that his word is truth in this case.