UPDATED--Manchester United 3, Liverpool 2: Not Quite Enough

Share All sharing options for: UPDATED--Manchester United 3, Liverpool 2: Not Quite Enough 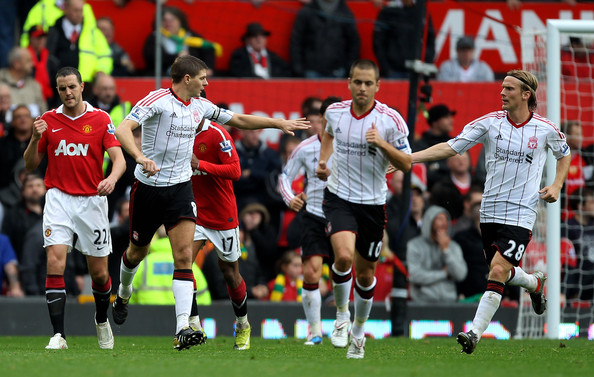 Dimitar Berbatov nets a hat-trick to lead United past a resilient Liverpool.

Before I get into my reflections on the match, I wanted to comment quickly on the posts by folks during the matchday thread and the earlier iteration of this one. As has increasingly become the case, I'm really impressed with the thought and care everyone's put into their comments---particularly after a tough match like today's, it'd be very easy to get at each other about differing opinions. All I've read so far, though, have been well thought-out reactions that are expressive without being offensive regardless of where the opinions fall. Good stuff all around.

Plus, it just wouldn't be the same if we weren't descending into madness together.

Anyhow, thanks for that, keep it up, and here's my thoughts from top to bottom:

Putting to Rest the Narrative of Fernando Torres as a Shadow

Nobody around here really needs convincing, but I figure it's worth bringing up again because the Jon Champion commentary record that Sky Sports used was apparently scratched. Before the start of the half I joked that there would be easy money on a bet that Champion led with a reference to Torres' apparent lack of interest, and sure enough the second sentence out of his mouth was "...the forlorn Fernando Torres." Laughable if it wasn't such a popular narrative.

Again I cry foul, and again I ask what exactly is expected of him. Is it retreating to a spot just in front of the back line to gather possession? Then surely a weaving run through the opposition's midfield with a tantalizing through-ball to himself? And then, of course, he could lay it off for himself to tap home? Perfect.

He's got to be held accountable for any pouting and petulance, and to a large degree I think he is (at least by those who are paying attention). But until the problems behind him are sorted (see below), it's unfair to suggest that he's not playing to whatever standard he's created. No coincidence that both of Liverpool's goals were a direct result of smart movement and quality service.

From now on, moratorium on the issue. Until I bring it up after the next match.

Sorting Through the Midfield

It's hard to tell what shape Liverpool is going to take in the midfield area, and for me, today only muddled that picture.

On the positive side, we saw the emergence of Raul Meireles as a potential difference-maker (as we had hoped for); near the end of his shift he was clearly gassed, but for large spells of the match he was composed, confident, and active in spreading the ball around. Obviously Steven Gerrard's performance is also worth noting---there's nobody else you want stepping up to the ball in those situations, and he converted when Liverpool needed it most.

But there's also plenty of questions left to answer---Joe Cole went missing at times, although in the second half he created a bit more space and provided the pass that led to Torres drawing a penalty. Maxi was pretty poor for nearly the entire match and added absolutely nothing from the right side. And Christian Poulsen continues to be bland and serviceable at best, careless and anonymous at worst.

The plan at this point seems to be a reliance on the fullbacks to provide width through overlapping play with in-cutting wide midfielders, which was, as others have pointed out, somewhat effective at times today. But the inconsistencies there, along with the still-lacking ability to link play and provide service to Fernando Torres, are constant worries. Maybe Dirk Kuyt's impending return helps, but for now something needs fixing.

Unfamiliar Troubles at the Back

Let's get the Dimitar Berbatov praise out of the way---he was simply unstoppable today. We've all seen glimpses of his class, but at United they've mostly been just that. Today it was all put together, and he was a world apart. Tremendous display from him.

Liverpool didn't do much to help themselves, though. Glen Johnson continues to have defending-specific fugue, Martin Skrtel looked outpaced and overmatched, and Jamie Carragher and Paul Konchesky both had blood on their hands on two of Berbatov's goals. Even those making cameos on set pieces (stand up, Fernando) were below-par.

For all the troubles in the past year and a half, Liverpool's usually been able to hang their hat on quality defending. That wasn't the case today, and it cost them dearly. You have to account for the opposition, but there were also some inexcusable moments. Hopefully they're out of the way and sorted as the season moves forward.

As I wrote in the previous version of this post, I have conflicted feelings about the outcome. Obviously a draw or win would have been fantastic, but I was encouraged by the second-half performance. United's third was crushing, but it didn't completely wash away the positives that we saw for the period of time that Liverpool nearly put everything together.

And that's largely where I sit now---bothered but not broken by the troubles we've seen on the pitch, and cautiously optimistic that there's an identity being developed. Hodgson finally made some positive changes and signaled intent late, and while it didn't work out today, it's something we've been crying for. At 2-0 the match very easily could have been done and dusted, but the team showed some fight, which, for many of us, was another concern.

The schedule starts to ease up from here, and at current there's little separation between the 4th spot and the 16th. I'm trying to stay relatively hopeful that there's indications of better performances on the horizon, and it's getting easier the more I try. Also easier the more I drink.

So, yeah, today stings. But there's more football to be played soon enough. And for me, regardless of how today ended, that's still a good thing.