Liverpool 4, Steaua 1: Better When I'm Not Around

Share All sharing options for: Liverpool 4, Steaua 1: Better When I'm Not Around 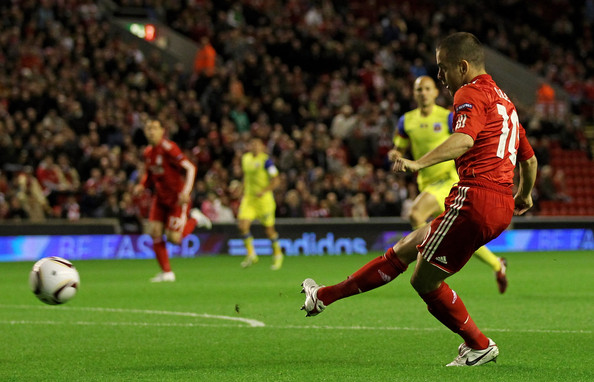 Liverpool score three goals in a second half I missed and get past Steaua Bucharest 4-1.

Which was apparently down to another good showing from David Ngog, who by all accounts had a great second half and sandwiched a brace around Lucas' strike from distance.

I've got the drive home from work and a scramble to catch some highlights until later, so leave your thoughts here. For me, another worrying first half display that did little to discount worries about Liverpool's ability to impose themselves on a match, but apparently better in the second half. I thought Steaua were as impressive as Liverpool were poor, and they rightly deserved to be even at the break.

A full 90' for Raul Meireles and 88' for Joe Cole causes some questions about their availability for Sunday, and there's going to be plenty of talk in the next couple days about how Liverpool prepare themselves to run with United at Old Trafford.

**Brief Update** So I haven't been able to find any lengthier highlights than what footymix provided in the links (thanks, by the way), which means there's not much more coming in the way of a match recap. Thursday afternoon staff meetings combined with Liverpool's failures have left me out in the cold.

So I'm mostly reliant on your reactions and, as usual, nate at oh you beauty. And Xabi Alonso, who earlier tweeted "Well done Reds." What an absolute gem. Never will another FIFA season go buy that I don't bankrupt Liverpool buying him back. If the game's realistic, though, it won't take much. Pow!

Anyhow, hopefully everyone's able to enjoy the result even if there's still some issues to be ironed out ahead of Sunday. Like I mentioned above, and without seeing the second half, my biggest question is how the personnel changes in the next three days. I have a sinking feeling today's lineup means Lucas and Poulsen in central midfield against United---maybe that choice makes sense, but I want to see more from Hodgson and certainly more from Liverpool.

Have a good night everyone, back in the morning with whatever pops up.