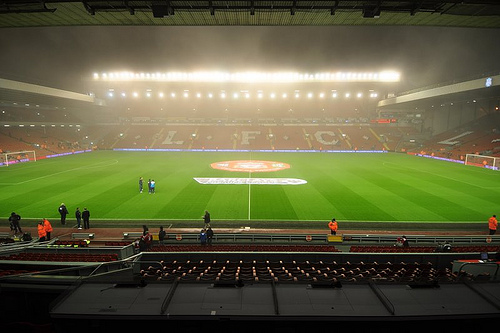 Changes rung, indeed. The biggest surprise for me is Jay Spearing in central midfield---gone missing since the Rabotnicki tie and slightly overmatched then, I hadn't anticipated that he'd be in the mix for much more than the early League Cup matches. Interesting to see how he and Meireles balance things is central midfield, as Spearing isn't exactly a physical presence and the Portuguese is in the box-to-box mold.

As Galahad mentioned, who knows what this formation looks like in practice. This is plucked from the UEFA website, even though those bastards betrayed me in their information on Steaua. At times I'd guess it's 4-2-3-1, 4-4-1-1, and 4-4-2, whatever that means. At least in theory this lineup affords Roy Hodgson plenty of pace and creativity, but we'll have to wait to see if they can provide the finished product.

The past couple of days have seen more inferences and quasi-news about the team selection than any other match I can remember this year. We've heard:

Daniel Agger speak openly about his hopes of being selected

Pepe Reina's desire to play in every match

But regardless of all the build up, or the team sheet, or the peeking towards Sunday, all we're really left with is knowing that Liverpool could use a good display this evening. It's not lip service to suggest that they'll find things mighty difficult if they don't---the recent displays in league have cemented that, and the first leg against Trabzonspor at Anfield a few weeks back didn't exactly provide a sturdy foundation.

So we can go on and on about Anfield's European nights, the magic of the atmosphere, the level of the competition, and focusing on league, but at this point it's down to the very basic need for a quality performance. If we don't see that tonight, or in the next few days, the snowball rolls further downhill and, with the next few weeks so crowded, it's not hyperbole to suggest that it's going to be awfully hard for Liverpool to recover.