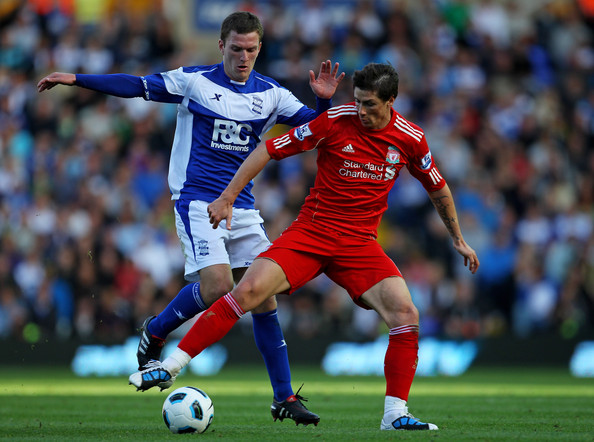 Sarah's already covered this in some depth on the front page, but I figured this has become enough of a thing that I should at least go through the motions. Plus her piece wasn't biased enough.

"Out there for 45 minutes ____________ has been terrible. He hasn’t got hold of the ball, he hasn’t chased, he’s got frustrated, he could have been booked. He’s been diabolical. He’s looked frustrated, sloppy, lethargic.”

Thinking back to the first half yesterday, is the answer:

Especially if you remove the contextual elements (e.g., "got hold of the ball," "could have been booked"), there's really no telling. Sloppy all around, frustrated to a man, and, in many cases, lifeless at best. Only Milan Jovanovic and Pepe Reina escape censure here, because the former was a tireless runner, looked good on the ball, and at least had some sort of spark. The latter, you know, saved the match.

For me, the only thing resembling a story here is that the target of ire is Fernando Torres and not Lucas or Rafa or Tom Hicks. Also, Jamie Redknapp did, in fact, use a five-syllable word. End of shock.

We know that Torres is prone to fits of petulance, prone to going anonymous for large spells, and prone to giving away possession relatively frequently when he's trying to do too much. That doesn't make it okay, but it's not like this is a new phenomenon. It's absolutely infuriating, and, to be fair, I can understand Redknapp's frustration.

For me, though, singling out Fernando Torres, or any player for that matter, from yesterday's first half performance completely misses the mark. Save for Jovanovic and Reina, the entire squad was just a complete gash. There was no urgency, from a technical standpoint it was one of the worst halves of football I've seen Liverpool play in some time, and they were counting their lucky Reinas to be level at the half.

I also think focusing on a player that we know to be so reliant on service from the midfield and wide areas is wasted breath. Torres is a brilliant striker, one of the best in the world on-form. But he's terrifically one-dimensional in that regard---he's not a great passer of the ball, he can't really play anywhere outside the barrel, and when he's starved of service, we're going to start hearing pundits consulting their thesaurus.

This isn't an exercise in excuse-making---far from it. It was an inexcusable performance yesterday for all involved, Torres included. But if we're talking about a service-reliant striker who received all of approximately six passes from central midfield (Lucas/Poulsen/Gerrard here) in the opposition half during the 90 minutes, roughly four from the wide midfielders, and about five from the fullbacks, there's plenty of blame to go around. Chalkboard it yourself.

Again, as Sarah noted via the link above, there's likely a good amount of this that's down to what he's been able to provide for the club since he's arrived. Moments of brilliance out of nothing, all done while proclaiming his love and loyalty for the club. All things considered, it's been a pretty smooth ride.

This year, though, it's been tough on every possible front---injured to finish the 2009-2010 season, he raced back to get fit for the World Cup only to look terribly off-form (particularly in contrast to the brilliant David Villa), injured again in the final, once again facing a fitness battle for the season's start, and clearly off the pace and off-form as the season gets up and running. Goals against West Brom and Liechtenstein haven't exactly quieted the growing amount of negative attention his performances have garnered.

So what's the point? I don't know that this story really warrants any sort of point being made, especially for the folks that usually hang around here. We certainly don't need to waste any motion pressing the panic button on Torres in light of the squad's struggles overall. He'll continue to get the attention because of what he's done previously and the impact that he can have when he's on-form, and some of the criticism will be fairly accurate.

After yesterday, though, "diabolical" would have fit for just about anyone, on the pitch and off. Yeah, it would have been great had Torres snatched one late. Then we'd be singing his praises about overcoming adversity, turning the match single-handedly, impregnating women with but a glance. Didn't happen though, and here we are.

Probably time for moving on, yes?