Share All sharing options for: UPDATED---Liverpool 0, Brum 0: The Familiar Comfort of Mediocrity 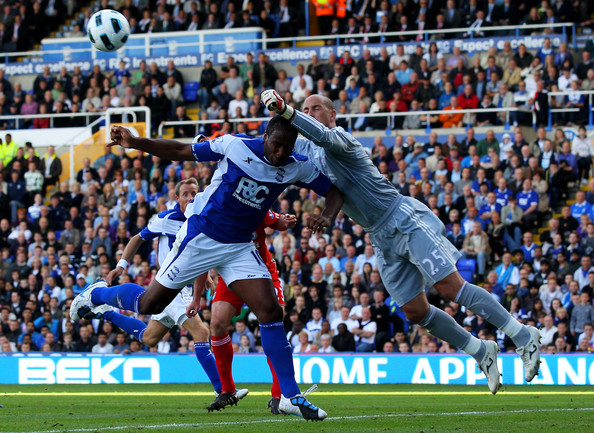 Further and further down the rabbit hole.

There's really nothing particularly original about what I'm about to write, but I figure I'll write it anyway.

In isolation, today's draw at St. Andrew's would be a lovably quirky bump in the Premier League road. "Tough place to play, but it happens to all the top sides" they'd say. "That Birmingham are a plucky opponent, got to watch out for them." "Took points off Chelsea, Arsenal and United last season, too." "All things considered, a draw's a good result."

In the grand scheme of Liverpool Football Club, though, this is not a 0-0 draw in the vein of Chelsea, Arsenal, or United. That would intimate that Liverpool are somehow a club on the rise, or that they play a brand of football that somehow means they deserve all three points and are terribly unlucky when that isn't the outcome.

No, this was a 0-0 draw that, as Liverpool supporters, we have become accustomed to. We know full well that it's a draw in which Liverpool were not hard done by, or were unlucky, or proved that they were headed it any sort of direction other than laterally at best. There's absolutely no weight to those arguments anymore.

Regardless of the man in charge, this past year has seen Liverpool devolve into a side where this type of performance is the not the exception to the rule. It's standard stuff now---today was West Brom two weeks ago minus Fernando Torres' winner. Were it not for Pepe Reina, today was dangerously close to 3-0 at the Eastlands. It was last season's Hull, Stoke, Wolves, and Blackburn.

The 1-1 draw to start the season against Arsenal now looks like the finest bit of football Liverpool's played in ages. The smash and grab at the end against Trabzonspor a godsend. And free-flowing displays against Rabotnicki, as far too many have already noted, a fading memory.

I'd argue that we can at least know what to expect, but that doesn't make it any easier. It's a pretty straightforward formula at this point---starting eleven that sets a somewhat depressed mood, wobbly opening minutes where Liverpool concede/come close to conceding, a couple spells of promise throughout the second half broken up by a willingness to let the other side set the tempo for large amounts of the match, and a result that manages to underwhelm each time.

And if we run with that, it's the Lucas-Poulsen pairing in the middle that makes us depressed, it's the threatening headers from Brum that Reina saves spectacularly, it's Liverpool looking relatively promising to start the second half and after Meireles came on, it's Birmingham largely dictating the match's proceeding outside the closing minutes, and it's yet another 0-0 draw.

Roy Hodgson's comments that his "expectations were not that high anyway" are obviously irksome, but as I thought about it more, and if I'm being truly honest, there's really no grounding to have expectations that are any higher. Obviously I hope for better performances, and on the surface I expect Liverpool to do better. But I can't say that, given the circumstances surrounding the club and recent performances, I expect much more than what we've seen in recent weeks and months.

**For a bit of clarification here, please read the comments section. My intended sentiment wasn't spelled out as well as it should have been, and Galahad and Noel have done an excellent job of laying things out there. Inmates running the asylum indeed.**

Unless I'm just confused, or missing the point, or overly pessimistic about another dismal result, I don't think today's about singling out any one player as performing poorly (because that would be damned difficult) or lamenting another bump in the road. It's about adding to the growing body of evidence that Liverpool are, as I mentioned in the title, increasingly comfortable with being a mediocre football team.

I'd guess the "task" that Hodgson referred to in the above link was not trying to win, it was trying not to lose. I suppose they stuck to that task mighty well. And a part of that task didn't involve going for a winner, or bringing on players that would have changed the shape of Liverpool's attack. Even if Raul Meireles gets a half-chance late, there was no concerted effort made to win the match.

Until the ownership issues are solved, until there's true investment made in improving the squad, and until Liverpool re-learn how to be disappointed with performances like today's, we're left to wait, wonder, and tell ourselves we expect more.

And maybe that's got to be good enough for now.