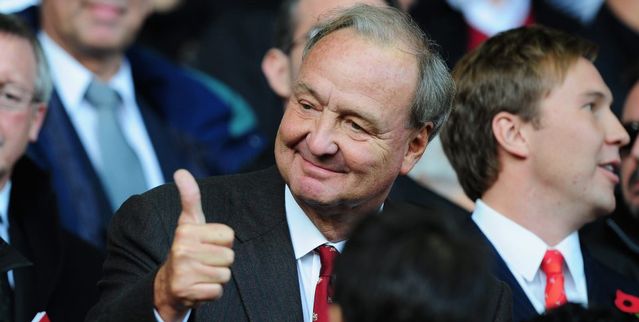 "Jan(uary) is a poor-quality market. The summer window will be big."

All this over Carlton Cole?

But the West Ham striker had been linked with Liverpool for weeks now, and it was expected that come Tuesday night he'd be Anfield-bound. If not him, there would be others---Fernando Torres is coming off an injury riddled 2009-2010 season and an underwhelming World Cup performance, and his only true back-up, David Ngog, currently has injury concerns of his own. The young Frenchman has been encouraging in his performances thus far, scoring four goals in three matches to start the season, but his ability to be successful as a go-to striker is largely unknown. A move for a striker, at least according to 300 of you, was the top priority.

So naturally, all Liverpool do is go out and snatch up Paul Konchesky. Nothing like fixing a problem that you created for yourself.

The day in total saw six players leave Anfield, all part of deals that are either permanent or, in the inexplicably f*cking stupid case of Emiliano Insua, a loan with a sale on the horizon. Here's the activity on the way out:

Six players, all under the age of 25. For a club whose youth academy was finally made right, today was mostly a case of "buy for now, develop for sale."

Dalla Valle and Kacaniklic were part of the semi-swap that brought Konchesky to Anfield, and along with Plessis, Weijl, and Insua, they would have qualified as homegrown talent in the coming years. All arrived with some level of acclaim, and all performed at a level of note at one point or another. I'd argue that, outside of Insua, the exit of Dalla Valle stings the most. He's lit the youth and reserve squads' opposition on fire in the past few years, and along with Dani Pacheco, he looked to have a bright future.

You won't be surprised that I reserved a special place to rail on the stupidity of loaning Emiliano Insua with a view to a permanent move. The only circumstance in which this makes sense is if the player himself was so desperate to leave that he'd go anywhere, but we never heard anything along these lines. And with Liverpool these days, you'd think something would have most certainly found its way out.

Otherwise, it's an absolutely terrible move made worse by the fact that, just to replace Insua, the club shipped off Insua, Dalla Valle, and Kacaniklic. Plus cash. For Paul Konchesky. It's probably unfair to Konchesky that he's at the center of it all, but there's no sense to be made out of creating a problem out of a perfectly fine situation and then patting yourself on the back when you solve the problem.

The talk of "Liverpool solving their left-back dilemma" is an absolute joke---don't make the dilemma in the first place by forcing out a talented young player.

I've staved off getting heavily involved in commenting on the ins and outs of the ownership tragedy---the financial aspect is over my head, and a low boil seemed appropriate when a sale looked to be on the horizon. After today, though, I don't know that avoiding the topic is possible.

This day was a perfect microcosm of the damage they've done to the club---driving away committed young players, buying on the cheap, and pocketing millions (at least temporarily) in a transfer window that was supposed to see the club improved greatly. Devoid of class, dignity, loyalty, or honor, they once again played Liverpool for a fool.

Eventually it's got to stop. But until it does, things are looking mighty scary.