Share All sharing options for: Liverpool 2 (4), FK Rabotnički 0 (0): An Exercise in Restraint 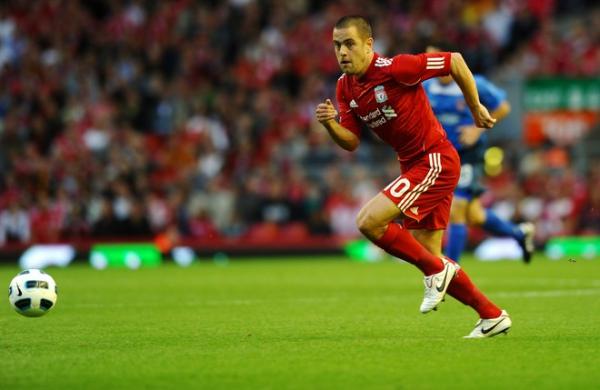 Liverpool put on a classy display and ease past Rabotnički to progress.

Very, very easy to get ahead of ourselves after this display. Once we saw the team sheet, we knew there was a very good possibility that Liverpool were, at some point, going to be able to use this as a glorified training exercise. And given the early possession and chances they were able to create, we essentially saw the entire second half in such a light. A bit of lackadaisical defending and crowding forward allowed Rabotnički a couple of late chances, but if there was any doubt about the winners of this tie, it was settled by first half goals from David Ngog and Steven Gerrard.

Like last time, I'm going to use a bulleted approach to the recap. I think it's a little easier with these matches to lose track of the narrative of a match---and in all honesty, the only narrative was the complete and utter dominance of Liverpool. Allow me to remind the uninitiated that I do realize this was Rabotnički, a side so utterly overwhelmed that, as mentioned in the early match commentary, they took pictures of each other on the pitch prior to the match. Yes, a great story in the Havant & Waterlooville tradition. But this will not be the type of opposition that Liverpool face on a regular basis---that much I understand. That's the whole exercising restraint part.

So the key points for me, then:

---Joe Cole. Joe Cole. Joe Cole. In the first twenty minutes alone he was magnificent, displaying a fancy first touch and precise passing. He was, in sum, the missing link. Not evolutionarily speaking, mind. We're talking about the type of player that Liverpool have needed, last year in particular. He was creative, he was quick, and most of all, he played inspired football for 90 minutes. He tracked back like he was 17 years old and chased after balls like this was the title decider. His understanding with Steven Gerrard was more than encouraging, and on a number of occasions you got the feeling that he was just a step ahead of Liverpool's other attacking players. The time and space afforded by the opposition likely had a part to play, but he was positive and relentless regardless. A more than decent Anfield debut, even if he defied all understanding by not notching his first goal in a red shirt. Stay healthy, please?

---Liverpool's attack, which included a revitalized Steven Gerrard from central midfield, overlapped and interchanged almost constantly. With Milan Jovanovic and Dani Pacheco proving willing runners, Liverpool were able to stretch Rabotnički nearly every time up the pitch. The latter had some nervy early moments, as a few trampoline touches belied the composure and confidence we witnessed in the U19 Euros. But there's no way he's unaware of the expectations that performance created, and he has to be forgiven for a few early nerves. He settled nicely and linked up with any number of forward men, as did Liverpool's other new addition. Jovanovic was tireless in his work down the wing---I either mentioned it on Twitter or in the previous thread's comments that if all he does is chase balls down the left flank and cross, I'll be thrilled to watch him all season.

---As noted above, Steven Gerrard really did look like a different player than he was for most last season. A good part of it is likely down to having Joe Cole bear a large portion of the creative burden up top, and having Lucas as the stand-up man in central midfield, but it was vintage Gerrard in distribution and effort. His goal wasn't close to the best part of his day; more than anything it was the willingness he showed---a willingness that, unfortunately, didn't seem to be as present last season. Even with Cole playing a treat, Gerrard's the man that drives Liverpool, and today was a perfect example of that.

---It was a largely unremarkable effort from the backline---again, mostly due to the lack of quality in attack for Rabotnički. Outside of the late collapse in concentration, though, they were sturdy and solid. The performance of Martin Kelly deserves picking out here, as the youngster again proved himself to be capable both in defense and getting forward. I'll repeat what I said after the first leg---he deserves to be next in line on the depth chart across the back line and will surely start more than a handful of matches this year.

---Last time out I completely flew by the performance of Lucas in midfield, but again today he did exactly what was asked of him. The space in midfield was stablized by his presence, and his loyalty to the role just off Steven Gerrard proved vital. He got forward when he needed to and always found his way back to the holding role. More and more he's showing that his place is deserved regardless of the manager.

All in all, it's the result we knew was coming. But it's the fashion in which it was achieved that's so encouraging, and despite its truth, I'm tired of saying "it was just Rabotnički." Liverpool were dominant in every aspect of the match, they showed a style that went missing last season, and they made watching football fun again.

Now there's just the matter of doing it again when Arsenal visit Anfield on August 15th.