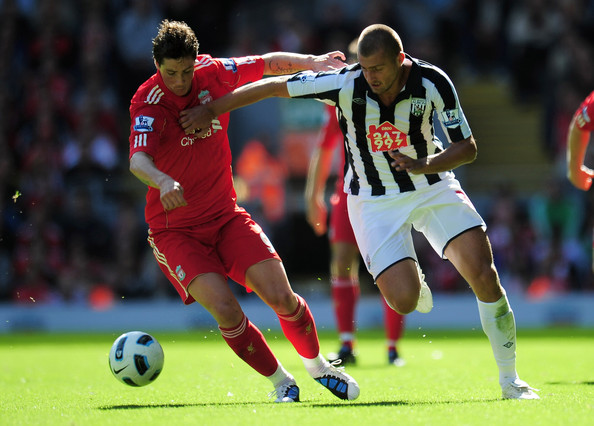 Liverpool got the goal they needed from Fernando Torres and take all three points.

As has been the case recently, I'm going to take a bit of time in between now and the full post-match recap, but here's a few brief thoughts.

For all the talk about Liverpool using this one to assert themselves as being on the way back, I think it was West Brom that made the clearest statement of intent. They were dominant in possession at times and caused more than a few problems for the home side, and even after being reduced to ten men they posed a threat. Well done to the Midlands side---if they can continue to play that style of football and get the result, they've got a great chance to stay up.

The first half was mind-numbing stuff, but thankfully the second half was at least more interesting. The match didn't come without incident---Liverpool were extremely fortunate not to give away no less than two penalties, James Morrison was sent off inexplicably by Lee Probert, Torres' goal was a great (or extremely fortunate) volley, and the striker was denied a penalty shout after a clear handball.

So I struggled to get through the replay of FS+, partly because it wasn't exactly a joy to sit and watch and partly because my wife just had to watch the red carpet show for the Emmys. Unfortunately, the latter might have been more riveting.

When I said earlier that the result doesn't completely mask the problems I meant it. But I don't think that I was acknowledging those problems as much as I should have. Liverpool were completely impotent in midfield---Lucas and Christian Poulsen weren't noticeably bad, per se, but they couldn't create anything going forward and had little impact on Liverpool's attack. They did their jobs serviceably and broke up play well enough, but that's a partnership that's void of ideas. Against West Brom, that's a big problem.

I still think that West Brom did really well---whether that's down to Liverpool "letting" them or not, they gave a good account of themselves on the day and played the more attractive, if not better, football. Having said that, Liverpool have to get better in nearly every aspect. No way around it, they're going to really struggle this season against the top sides. The performance against Arsenal was gritty, and they were minutes from all three points, but I'm in complete agreement with a few of the commenters who pointed out that today was a good example of how far behind Liverpool is in danger of falling.

To finish, I'll again echo the comments of folks earlier, in that I love the result but was not a big fan of the performance. That it comes before a two-week layoff almost makes it worse for me. They'll need to hit the ground running when everyone returns frommomentum heading into a tough stretch after the international break---a tough visit to Birmingham on the 12th, hosting Steaua on the 16th, and at Old Trafford on the 19th.

Today might not have been a season-defining performance (let's hope not), but that week will give us a pretty good idea of where Liverpool stand.