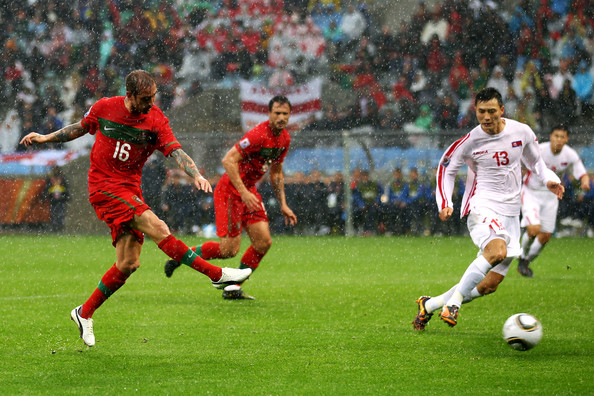 The Portuguese midfielder joins Liverpool on a four-year deal.

Liverpool have completed the signing of Portuguese midfielder Raúl Meireles on a four-year contract.

The Reds have paid 14 million euros for the services of the 27-year-old midfielder, who has won four titles with Porto and been capped 38 times by Portugal, including in all four of his country's games in this summer's World Cup.

It's hard to formulate many thoughts on this signing, mostly because it's out of nothing. I think we all know that Meireles had a great showing at the World Cup, but I'd but surprised if anyone thought that he would start September in a Liverpool shirt.

For me, this is the best of the signings that Liverpool had to actually pay for. Meireles will enter the fray not as a direct replacement for Javier Mascherano or Alberto Aquilani, but as an adaptable box-to-box midfielder that provides a link in the central areas. At the present moment, I think that's something Liverpool are sorely lacking, and the capture of Meireles should fill that gap.

I've had a passing interest in Porto since 2006 and watched matches here and there (mostly Champions League), and I think he'll add a solid awareness, good workrate, and efficiency to the midfield. As mentioned above, I'm guessing he's joined to provide some sort of forward fluidity to the midfield---not strictly defensive-minded, but not one to bomb forward completely, he's probably unlike any of the midfielders currently in the squad.

The signing comes at a good time---he'll obviously not feature tomorrow, but there's a full two weeks in between tomorrow's match and the visit to St. Andrew's on September 12th. I'd guess he gets recalled to the Portuguese national team in the meantime, but he'll have an opportunity to get settled and familiar prior to his first match with the club.

**Strange sidenote---when researching the Portuguese schedule in the next couple of weeks, I stumbled upon this: A match review from the future on Soccernet designed to report the 2-0 victory by Portugal over Cyprus. In a strange twist (as if the future part wasn't strange enough), it's actually an account of Sheffield Wednesday's opening-day victory over Dagenham. So, no news about Meireles and the Euro qualifiers, but I'm betting it ends 2-0 with an own goal and a Clinton Morris strike, somehow.**

As has been mentioned in the comments sections of previous threads, there's a good amount of surprise that comes with this signing. But I don't think I'd be incorrect in saying that this time, it's surprising for all the right reasons. A deal done without weeks of rumors, at a fee that makes sense, and a player joining that will likely make the squad better.

Tough to argue with that.