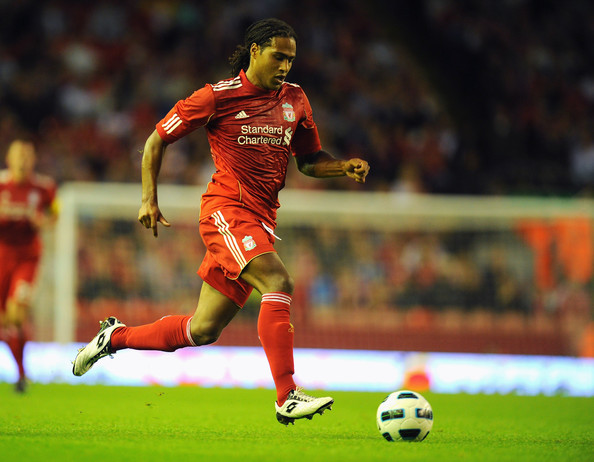 Liverpool get past a tough Trabzonspor side to progress.

I mentioned in the earlier edition of this post what an interesting match this turned out to be---I feel like we saw a couple different Liverpool squads in the two different halves, even with largely the same personnel.

Ran the gamut from extreme disappointment and negativity (see earlier comments thread in the matchday post) to a bit of pleasant surprise as Liverpool grab the late equalizer and Kuyt's goal to kill it.

Main points for me below, and feel free to add yours in the comments.

There's not much more that needs saying---Liverpool were terrifically awful in the opening minutes of the match, and they were rightfully punished by Teo Gutierrez's 4th minute goal. The build-up to the goal started with Gustavo Colman dispossessing an uncharacteristically lazy Dirk Kuyt about forty yards from goal, and the resulting cross/shot hybrid found its way to an unmarked (and barely onside) Gutierrez.

It's tough to say that a team have done enough to earn a goal after four minutes, but Liverpool had done little to prove otherwise, and their play for most of the first half was less than convincing. No creativity in attack, careless in possession, and far too eager to fall into an all-too familiar pattern---win back possession, retreat to the backline, send a long ball forward, repeat. As Tom put it in the earlier thread, "Carra-hoof" was the name of the game.

It's probably not worth harping on, but this was vastly different than the performance we saw on Sunday at City in the first half. Liverpool were overmatched in both first halves, but at least at the Eastlands there weren't too many individual performances that underwhelmed. We all saw the tactical mismatch (well, lots of us did, ROY), but on a player-to-player basis it seemed like there was at least a semblance of hope left.

Today's first half, however, was bad all-around. As noted, Kuyt was pretty poor and looked to be listlessly drifting throughout the midfield area. At times it was indiscernible what position he was actually playing, and what's worse is that it could be said for more than just Kuyt. Fabio Aurelio looked to be lacking in match fitness, David Ngog disappeared into Trabzonspor's back line, and there was little in terms of creativity coming out of the midfield. And while it wasn't missed-penalty or red card bad, Joe Cole was anonymous in the role just off Ngog---little coincidence that he had more influence later in the match from a wider area.

So yeah, not much to be optimistic about at that point.

For everyone's sake, I hope we don't read a story about how Roy Hodgson gave the squad the hairdryer treatment at halftime. I'm sure he had some choice words in the locker room, but that whole concept is just white noise for me---he'll be completely lionized for being pissed off at players that, by his own admission, he's still getting to know, yet the press will paint it as the players giving it their all because their gaffer was so inspiring, etc. etc. whatever.

Once again, though, nothing really changed tactically, unless you can say that completing passes and maintaining more possession is a deft tactical maneuver. Liverpool looked to gain in confidence going forward, Ngog actually had a chance to waste (and did! Success!) just before creating another for himself, and Glen Johnson continued to bomb down the right side. Even as they waited for one to nose in front across the tie, it started to look like a different Liverpool.

Pacheco On, Aurelio Off

It's hard to make a ton of noise about a five minute run-out at City and thirteen minutes tonight, but Dani Pacheco has turned out to make it a hell of a lot easier. At the Eastlands, he was one of the only players with any sort of attacking urgency---I'm aware the match was beyond repair at that point, but he still pushed forward and showed creativity that the rest of the squad were sorely lacking.

And tonight, even though he didn't work his way onto the score sheet in any way, he changed the complexion of Liverpool's attack. He pushed forward relentlessly, stretching a Trabzonspor defense that had previously only been tested a handful of times by anyone not named Glen Johnson. Pacheco's pace and off-the-ball movement alone were more than enough to cause questions of the Turkish defense, and he's exactly what Liverpool needed. Less than twenty minutes of match time between two games, but I think he's making his case for plenty more.

Grinding Out a Late Win

Only a few times last season did we see Liverpool win one late in the match---Fernando Torres at Villa Park sticks out and Steven Gerrard's winner at Bolton was fantastic, but outside of those, Liverpool were far more often the victims of late-match heroics than they were the benefactors, particularly in Europe.

So tonight's win, regardless of the early worries and a few questionable performances, is one to feel good about. They overcame strong opposition in a riotous atmosphere, fought back despite an underwhelming first half performance, and found a way to win in difficult circumstances---with two goals in five minutes, no less.

It's not the Champions League, and it's not where Liverpool want to be. But they made the most of their opportunities, and they're progressing in Europe. Had that been offered prior to today's match, with today's squad, I'd have taken it no doubt.

Well done to Liverpool---we'll find out where they're headed tomorrow.