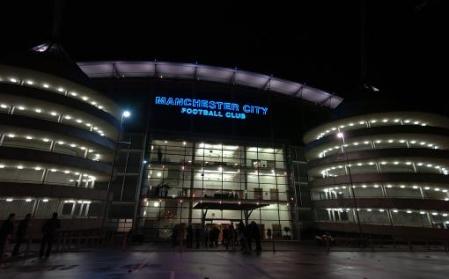 Quick reminder that this one falls squarely in the middle of a workday for me, and as a result I might not be able to update team sheets, etc. prior to kickoff. The best source for me is LFCLive.net---they've got plenty of links to keep you covered in the hours and minutes leading up to the match. Typically the official site's post pops up around an hour prior to the opening whistle, and other sites follow suit. Getting the opposition team sheet isn't an easy task, but I'd bet City's site will do the same as Liverpool's around an hour before match time.

As for match-related news, there's the usual forced controversy and corkboard material, this time focusing on Mario Balotelli and Fernando Torres. Roberto Mancini has proclaimed that "there are eight or nine fantastic strikers around and Torres and Balotelli are two of them." Somehow this has "notched up the tension" ahead of today's match, even though Torres is less-than fully fit and Balotelli suffered a knee injury in City's Europa League match against Timisoara on Thursday.

I'm not real qualified to comment on Balotelli's current form, or even his potential, but I will say that to announce he's in the same class as Fernando Torres or any of the other eight strikers on the imaginary list is a ballsy move by Mancini. I know Balotelli much better for the trouble he's caused rather than what he's done on the pitch (British media, selective research, etc.), so I think a bit of time is needed before we start training on water with him.

The other news of the day focuses on another striker---apparently PSV have turned down an inquiry from Liverpool for Swedish striker Ola Toivonen. The article mentions no formal bid or any discussion about an actual deal, but it seems that Liverpool's interest was high enough that Kenny Dalglish attended the match against Alkmaar. Grubb mentioned his name yesterday, and while I've read it in passing, this is the first bit about any confirmed interest. Granted, it's coming from Eindhoven and not Liverpool, but a deal for another striker has been a long time coming. With PSV stating no intent of selling him, though, I'm not sure there's anywhere for this to go.

Liverpool have confirmed that goalkeeper Diego Cavalieri has left the club and signed for Italian outfit Cesena. The stopper was signed by Rafael Benitez from Palmeiras in July 2008 and made 10 appearances for the first team. He has now signed for Italian Serie A newcomers AC Cesena Spa who clinched promotion last season. New-signing Brad Jones has now been allocated the No.1 shirt.

Not much to say here---once Jones arrived this was all but certain. Hopefully Cavalieri is able to get some consistent playing time and has success in what's sure to be a challenging year for Cesena.