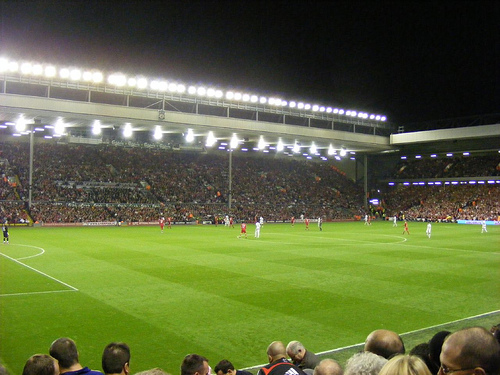 A quick note---my summer series of trips across the US comes to an end this weekend, as I'm traveling to Seattle and back today through Sunday. That means: 1) I won't be able to catch the match live today, and 2) posts might be brief and come at a strange time. Insert Young Boys joke here.

In all seriousness, though, I will be scrambling a bit to get something posted, but I'm sure I'll find a way to create, at the very least, an open thread. Feel free to keep discussion or comments going throughout the weekend---recently it's been great to see a bit more interaction on the site, and I hope that can continue.

As for today, there's a dearth of actual news---continued speculation about Javier Mascherano, and other than the end of the transfer window, there's no apparent end in sight. Roy Hodgson gives him take:

"We haven't had an offer for him. We want an offer that meets what we think is his value, and Javier is perfectly happy with this. He doesn't expect the club to just let him walk out of here. He hopes that a club comes in where he could be reunited with his family, which is the major problem for him, that offers us what he is worth and we accept that.

"But he has also made it clear that he doesn't regard it as a hardship to play for Liverpool Football Club. In fact, it's the reverse. It's because of family matters that he wants to go. He is resigned to one of two possibilities - either a club doesn't come along and offer us his valuation, in which case he stays, or we have an offer that meets his valuation, in which case he may go."

Last week Hodgson said something similar, so he's either keeping with the company line, or, in a wild twist of events, he's saying what's actually happening. Could it be?

After his display on Sunday, I don't know what to think about Masch. It was pretty simple about a month ago---he wanted to leave, the club weren't going to stop him, it didn't look like he'd have any part of the club's season. So obviously he turns in a man-of-the-match performance against Arsenal, and now I'm back to justifying how he's a fantastic fit for the 4-4-1-1.

The good news is that we won't have to deal with this, or any other transfer rumor bullshit (see: Alberto Aquilani) in a little less than two weeks. Sure, we have to contend with a fresh batch come January, but at least there'll be some time off.

That's really that for news ahead of kickoff---if anything pops up from now until 12:30p EST I'll make sure it's in, but after that I'll only be found on Twitter. I'm sure the prospect of following me following gamecast on a phone has you breathless with anticipation.