Liverpool 1, Arsenal 1: Anatomy of the Equalizer

Share All sharing options for: Liverpool 1, Arsenal 1: Anatomy of the Equalizer 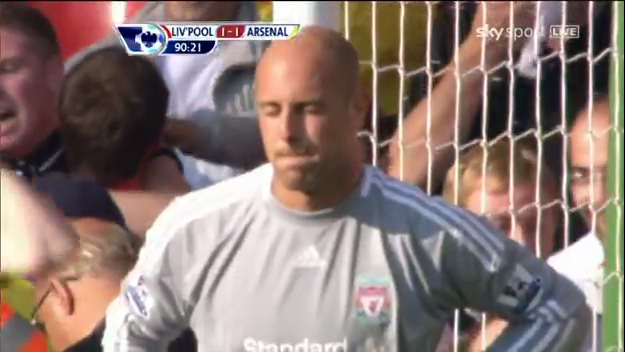 How did we get here?

The answer is, of course, very straightforward. Marouane Chamakh bundled one off the post, Pepe Reina stumbled after the rebound, couldn't collect it, and pushed it into his own net.

But there's much more that went into it, and in the past 24 hours I've developed some sort of masochistic urge to continually watch the play over and over again. I'm not doing any more than stating the obvious here, but my hope is that it's at least some sort of catharsis. 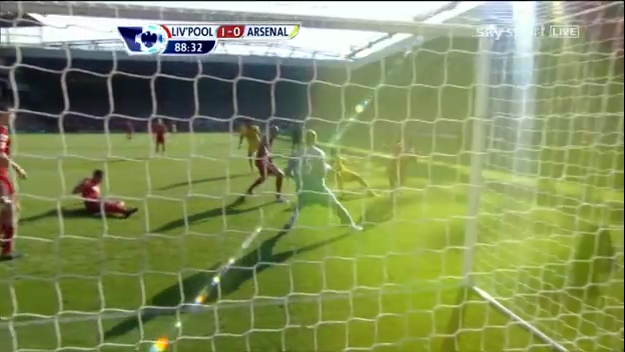 This wasn't from the goal itself---this is from just over two minutes earlier, when Andrey Arshavin floated a dangerous cross to the far post that nearly led to an equalizer. You can clearly see the sun coming off the roof to the right; it's partially due to the lens of the camera, but there's a pretty fierce glare for Reina to deal with. Liverpool were lucky here, but not so much just a minute after this replay was shown. 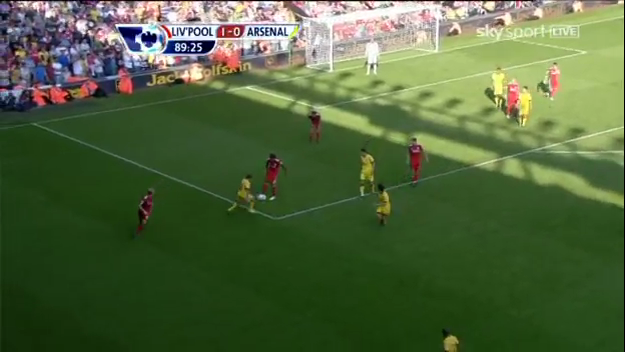 Why, Glen? He could have taken any number of angles here---lord knows Liverpool hoofed the ball up the pitch on more than one occasion, whether or not they had the lead. But Johnson tries to get cute and knock it off Arshavin, it doesn't work, and Johnson realizes that it was maybe not the best choice: 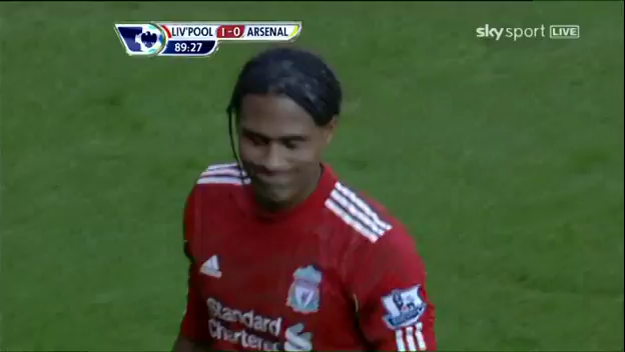 About the same face myself and two million other Liverpool supporters were making. 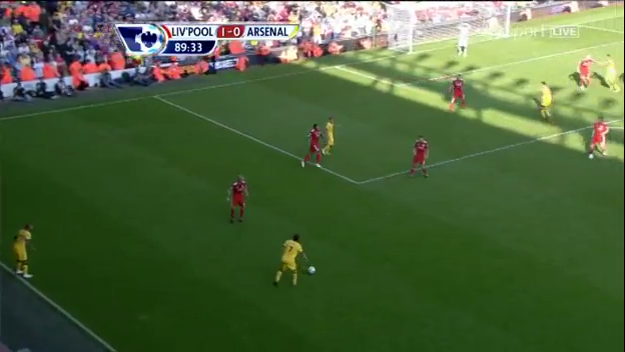 At the top of the screen you can see Reina with both hands over his eyes, likely trying to figure out what the f*** is actually going on. Not a good sign. 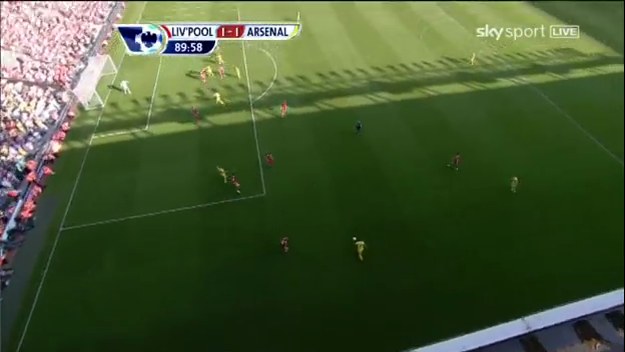 By all accounts this one wasn't down to an error by Liverpool's back line, as all of Arsenal's attackers were accounted for, and Jamie Carragher and Martin Skrtel had done a fantastic job keeping Chamakh under wraps. At this point, their strategy was pretty clear---throw the ball in the box, hope that someone's able to get on the end. No better man than Chamakh, whose ability in the air is renowned. 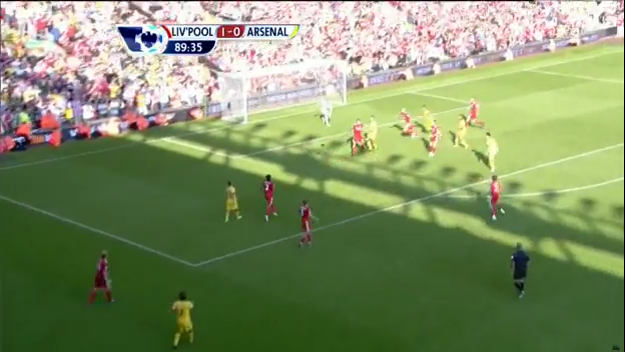 Obviously it's headed goalwards, but from the time it leaves Tomas Rosicky's foot to the time it gets to Reina/Skrtel/Chamakh, it's damned difficult to pick out. Pepe's been more than reliable when it comes to decision-making for crosses in the box, and I have to believe that the change from shadows to sunlight played a huge factor. At night or in a day match without the shadows, he punches clear or catches it. Here---not so much. 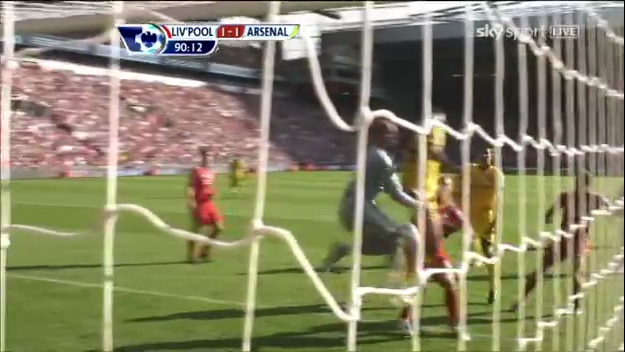 This is a major point of contention for Liverpool fans, and a good majority of Liverpool's back line---Reina's indecisiveness leads to a cluster of bodies, and we can see Chamakh coming over the top and splitting Skrtel and Reina. This is the point of contact that pushed the ball off the post, and it wouldn't have been shocking to hear a whistle. There's no body-to-body contact between Chamakh and Reina, but the Arsenal new-boy clearly bursts through Reina's arms as the keeper is about to catch. Like I said, largely down to Reina's poor reaction, but definitely a shout for interference. 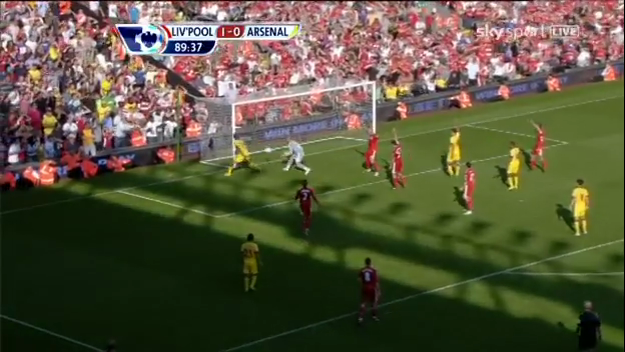 As mentioned, here's where we see Liverpool's back line call for interference---Skrtel, Carragher, and Daniel Agger all have arms raised, crying foul on Chamakh. At this point only Reina and Chamakh are playing, and as it turns out Reina had plenty of time post-rebound. Chamakh's momentum carried him past the post, and had Pepe stood firm or simply let the rebound pass, either he or Skrtel/Carra could have booted it away. Better view here: 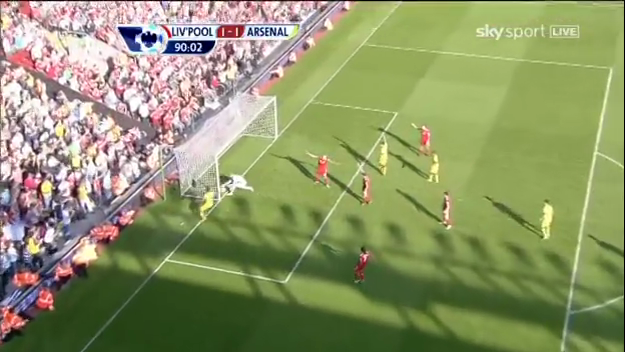 If's and but's in a matter of milliseconds, and just a complete calamity. 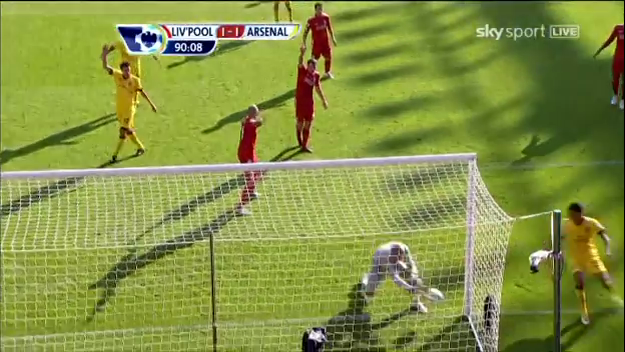 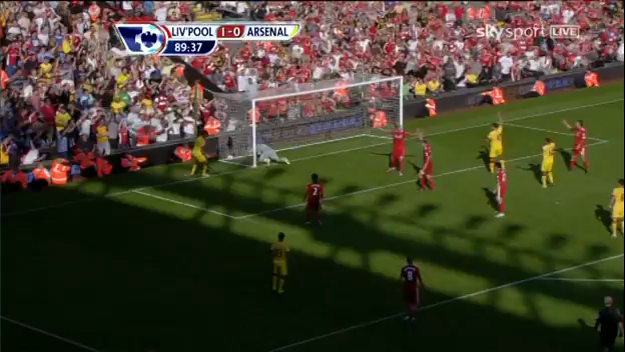 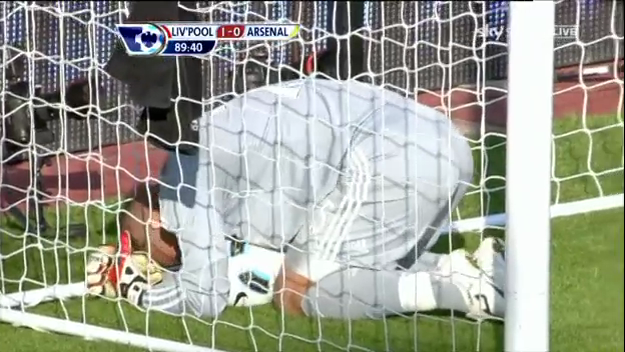 Even frame-by-frame, this one is relatively tough to make sense of. From Johnson's errant kick to Reina stumbling at the rebound---it would be hilarious if it didn't take two points away from Liverpool. Now, Arsenal could have scored in any of the five minutes of extra time that followed, but like many of you have said, pretty tough to swallow. And it bears repeating that through this entire charade, I've not once questioned Reina's status. Horrible moment, fantastic keeper.