Share All sharing options for: **UPDATED** Liverpool 1, Arsenal 1: So, So Close 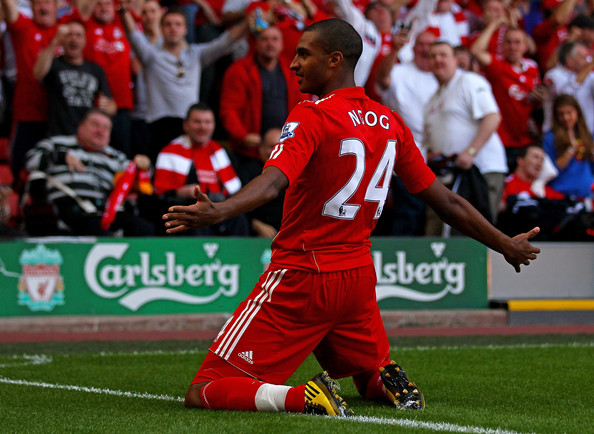 Back from a long trip, refreshed on some of the main points---let's dive in.

Luckily I've had a chance to properly prepare myself for the brief re-viewing that took place on my DVR---quick shower, jersey on for post-match good luck (no, it didn't work), glass of whiskey, and watching the 90th minute horror between a crack in my fingers. Here we are.

First, thanks to everyone who posted in the matchday thread and the previous incarnation of this post. I found myself agreeing with much of what you folks had written, and it's likely that you'll find points you touched on phrased differently here. I'll try not to plagiarize, but this glass isn't getting any fuller.

Also, I've decided to go with the bulleted format for match recaps for the next while---I realized that I'm far too sporadic to try to craft any sort of narrative description of the match. I'll start to touch on one point, think about something later in the match, want to write about it but don't want to interrupt flow, tell myself I'll remember later, forget, press "Publish," remember after some commenter makes me look like an idiot. Which happens anyway, but I sleep better this way.

The First Half Leading Up to Joe Cole's Sending Off:

Reference #1 to a commenter smarter than I: Tom brought up a good point here, in that we saw a disturbingly similar Liverpool to the one we saw last season. In his words, "there was still a lot of back passes and hoofs to Kuyt and N'Gog...there is a tendency to kick the ball from mids to def, def to def, then to Carra, who hoofs one up there." Completely agreed, and Arsenal were the stronger side---far too many dead ball chances in dangerous areas, and far too little in response from Liverpool.

We knew Arsenal were a different beast than Rabotnicki, and there was never a chance Liverpool would have the time and space to play the same free-flowing football we saw against the Macedonians. But that doesn't mean they need to curl up and pray they don't concede. Cole's presence was meant to open things up, but opening things up is mighty tough when he and the other midfielders were bypassed so frequently.

Not much can be said here that hasn't already---it was a stupid challenge that had a terrible result. I'm completely certain there was no malice, and that's including the fact that I don't give a shit about what type of player Joe Cole is. He forgot he has the legs of a man that's 5'6" and dove in as though he was trying to prevent a goalscoring opportunity. Watch Vermaelen come after David Ngog prior to his opener---essentially the same type of challenge, but Cole was too fast, too close, and too late. Given the context it's unfortunate for Cole, but a deserved red. And I'm not just saying that because Graham Poll said so. Lucky for Cole that Kolscieny wasn't seriously injured.

Strange that Arsenal give the ball away so carelessly in their own half---I don't know how Jack Wilshere was so woefully unprepared to receive a pretty basic pass from Andrey Arshavin (how he was back in defense is another mystery), but Javier Mascherano gathered, slipped a nice ball into the young Frenchman, and he blasted one past Manuel Almunia.

On the whole it was a solid display from Ngog that was obviously brightened by the brilliant strike. He opened quite poorly but grew into the game---go figure, once Liverpool stop hoofing, he's able to exert some influence. Four goals in three competitive matches is fantastic regardless of the opposition, and he's proving himself to be a capable deputy. He's grown in strength and confidence in the past year, and now he's just got to develop a bit better awareness---a good part of his poor opening was down to getting caught offside far too many times far too early.

The Play of the Midfield Behind Ngog

All are worth picking out individually; I've included them together just for the sake of space. I'll be the first to admit that Masch starting put me on tilt---I thought there was no way he'd be in the starting eleven given the back-and-forth reports about his exit, let alone the fact that he arrived late to training and didn't feature in the preseason. So of course he comes out and puts in a fantastic display in the midfield, breaking up play and providing the ball for Ngog's goal. Thursday I said "I’m just not a big advocate of relying on someone’s 'professionalism' when so much attention is on the club." So let's forget that, shall we?

It was a bit of throwback for Gerrard, who was anywhere and everywhere for nearly the entire match. He was great from set pieces, put a few decent efforts on goal, and flung himself into the challenge. That last bit might be a point of contention---yes, he was more lively, but if he's going to be playing deeper he'll need more of a conscience. It was only a matter of time before he was booked, and if it wasn't for Joe Cole and Jack Wilshere he'd have had the ugliest challenges of the match.

And Kuyt and Jovanovic were like twins on the opposite wings---always willing runners, forcing themselves into the opposition half and creating chances out of sheer will. Jovanovic's run in the first half was fantastic to watch, and Kuyt put in another strong shift on the right flank. Those two were largely responsible for keeping Liverpool's attack moving in the second half despite having only ten men---it'll be great to watch them this season should they both stay healthy.

Pepe Reina and the Arsenal Equalizer

Has anyone talked about the role of the sun? I haven't read too much outside of what I could pull up on my phone, but I swear that's a ball Reina punches away or catches if he's not shielding the sun as the cross is delivered. Maybe I'm making that up, but it changes the whole complexion of the scramble. It also could have been a foul by Chamakh, but only a few big decisions going either way on the day were adjudged correctly by Martin Atkinson.

You won't be surprised to know that this changes nothing for how I feel about Reina---I still think he's the best keeper in the league and one of the best on the continent regardless. He kept Liverpool in the match at times, (maybe) made a mistake in judgment and certainly a mistake in execution trying to gather the rebound. Nothing changes for him, but it was, for lack of a better term, shitty.

This one hurts, no question---Liverpool were five minutes away from all three points against a team that's given them absolute fits. It's still a decent result, but I'm not buying the "wow, Liverpool must really be down because they're happy with a draw" stuff. The supporters didn't seem to be throwing parades, the squad didn't look overly pleased, and Hodgson wasn't blown away by the result.

A point against Arsenal is always decent, but this was one that could have been more. The way it ended was crushing, but the good news is that there's a pretty quick turnaround with the next round of the Europa League starting Thursday. Hopefully we continue to see a balance of youth and experience, and hopefully the sting of today starts to fade.