Liverpool 2, FK Rabotnički 0: Up and Running

Share All sharing options for: Liverpool 2, FK Rabotnički 0: Up and Running 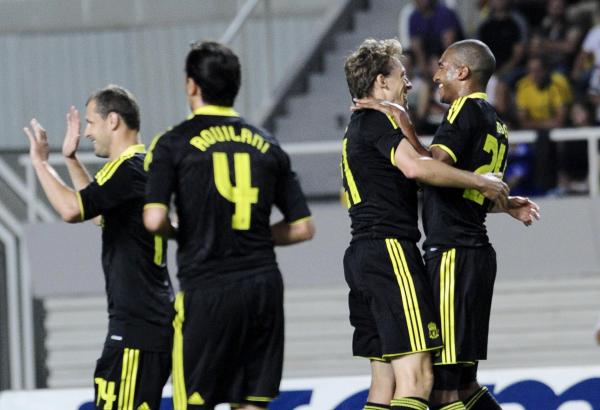 A brace from David Ngog all but puts Liverpool through to the next round.

Conflicted feelings seemed to rule the days leading up to this one---at least for me, I felt a great anticipation for things finally to turn towards the pitch that coincided with quite a bit of anxiety about how the club would start the season. Factor in that Liverpool were far less than full-strength in an unfamiliar environment and there were plenty of unanswered questions heading into today's match.

Thankfully we got most of the answers we were looking for in a 2-0 win that nearly assures Liverpool's progression to the next round of the Europa League. It was a largely confident performance---the type you'd usually expect from a Liverpool side in Europe. Maybe the most encouraging thing for me is that it was confident and patient from top to bottom, young to old, novice to experienced. Certainly some nervy moments and mistakes made, but it'll most definitely do for a season opener.

Due to a choppy stream and time constraints, I'm going to give some thoughts in bullet format. I'll likely miss some names or moments, so please feel free to add your thoughts in the comments.

---David Ngog's first goal was undoubtedly a gift from Rabotnički's defense, but his second was a thing of beauty. Martin Kelly worked his way up the right side all night long and was finally able to get the final ball across, and Ngog made no mistake in hitting the roof of the net. I joked on the Twitter feed that it was nice to see Ngog in a shirt size less than XXXL---maybe it wasn't the shirt, and it was likely partially due to the level of the opponent, but he looked stronger and more self-assured up top by himself. He's no stranger to quality finishes, and the one tonight was fantastic. Probably not the only back-up to Fernando Torres for a full season, but growing into the role well.

---Here's one for making dramatic predictions based off a match in late July in Macedonia---if Alberto Aquilani is able to stay fit for an entire season, he's going to completely change the complexion of the squad around him in attack. His style of play is contagious in the most positive of ways; on a number of occasions he linked together some fine first-touch interplays with Jay Spearing, David Amoo, Lucas, Ngog, Jovanovic, etc. etc. It wasn't quite the case for his full time on the pitch, but plenty of glimpses of potential. As this team starts to gel, and if he stays healthy, it could be mighty pretty to watch.

---The back line was, as expected, firm and relentless. Sotirios Kyrgiakos was the obvious fan-favorite and didn't do himself any favors after a clattering early tackle, Martin Skrtel gave no ground, and Daniel Agger was an able-bodied fill-in on the left. His ability to get down the flank and crosses into the area weren't quite up to speed, though, and he or Danny Wilson have got to be seen as fillers for now.

---Martin Kelly was the other part of that back line, and he's continuing to impress whenever he's on the pitch. He got forward in spades and got back well enough, but was prone to leaving a gap or two at times and couldn't quite develop an understanding with David Amoo. I think Kelly is close to being directly behind Glen Johnson on the depth chart, particularly if there's any sort of fitness concerns in central defense. No need to displace any center backs (read: Jamie Carragher) when Kelly's future is quickly approaching.

---Milan Jovanovic floated relatively freely through the forward areas all match---he was right, central, and left at any given time, and he showed touches of skill and pace when needed. I still need to see more, but for a first competitive match I'd say he did well enough. Plus his presence provided the opportunity for Ryan Babel to wonder aloud on Twitter, "I though Jovanovic was a striker?" Team unity starts now!

---David Amoo filled the opposite flank for the majority of the match, and while he's clearly got bags of pace, he was lacking in composure and was dispossessed a bit too easily. And as I mentioned above, he couldn't quite mesh with Martin Kelly on the overlap and missed a few opportunities. But he's also only 19 and showed flashes of great technical ability to go with the aforementioned pace, so a few heavy touches can be forgiven.

That's that for my thoughts---please add yours below and enjoy the result! Back later on if I get a chance to elaborate a bit more.