New Signings Unveiled, Masch Wants an Exit, Other Stuff Too

Share All sharing options for: New Signings Unveiled, Masch Wants an Exit, Other Stuff Too

It seems the news is recycling itself.

We first get confirmation on what's already been confirmed---Liverpool have signed Joe Cole, Milan Jovanovic, and Danny Wilson ahead of the 2010-2011 season. Cue dog and pony show. Cole and Jovanovic arrived on free transfers, while the Wilson deal entails £2,000,000 up front and a further £3,000,000 dependent on any number of add-ons. Cole is on board for four years, and both Jovanovic and Wilson have signed three-year contracts. But words are boring, so here's some pictures! 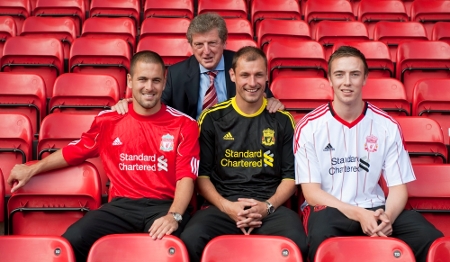 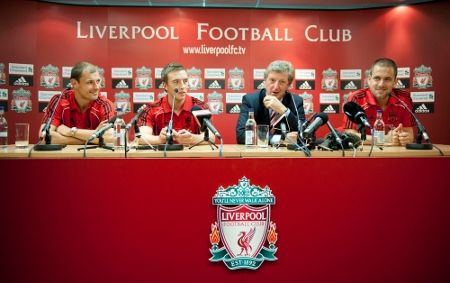 We've pretty much covered everything that needs covering regarding these three---both Cole and Jovanovic address the need for experience and skill on the left side of midfield, and Wilson is clearly one of the emerging defensive talents in the United Kingdom. For me, the capture of Wilson is maybe the most encouraging for the long term, but all three obviously have the potential to make an impact in the near future.

All three of the signings were deemed to be a good bit of business, although the club are still without a left back. The rumors linking the club to Carlos Salcido from PSV Eindhoven are steadily increasing, but two days ahead of the first leg match in Macedonia there's still no proven option. But it's not as if there will be a whole lot of proven options for the match with Rabotnicki, so what's one more area of concern?

The unveiling of the new signings comes on the same day as other news we knew was coming---Javier Mascherano wants out. The news actually came from Roy Hodgson, whose time with the press has been endless since he arrived at Anfield. Anyhow, here's what he had to say (via the above link at BBC):

"He wants to leave the club, he made that perfectly clear. I think he wanted to leave a year ago. He wants to leave now but he has a contract (that runs until 2012) and I expect him to honour that contract. The mere fact that the player is a little bit unhappy with his situation and would prefer to leave does not necessarily mean that he will do. It disappoints me but it is not unusual.

"I think in every club throughout the world there are players playing in the team who would prefer to leave. Some are allowed to, some are not allowed to. Mascherano is a Liverpool player with two years on his contract. I expect him to be a Liverpool player until the day the club chooses to accept an offer for him."

I doubt that means he'll be featuring in matches anytime soon---I'd expect and hope that the club get to work on selling him sooner rather than later, and that they actually make the funds available to use. If the price tag for the Argentinean is actually in the £30m range, it'd be a crime not to use a good amount of that to fill the aforementioned hole at left-back and provide the squad with some much-needed depth.

It's no surprise that you won't find me eulogizing Javier Mascherano much. Don't get me wrong, I've loved watching him play for Liverpool in the past few seasons, and he's one of the best pure defensive midfielders on the continent. But starting last summer things clearly started to turn for him, and while it was probably me projecting his desire to exit on his performances, I felt like I was watching a different, less impressive, more petulant player. The vintage performances, at least during 2009-2010, were few and far between, although on his day he was still one of the best in the side. Had he wanted to stay I'd be more than happy to see him in a Liverpool shirt this season, but now I'm just hoping for a quick and profitable exit.

As for the other stuff mentioned in the banner, I'm opting for a quick link dump rather than wasting space by typing the same thing differently for a paragraph. You know, like I did above.

---Emiliano Insua's move to Fiorentina might have hit some bumps, as there's some questions about the wages that he's demanding. This would be an interesting scenario---move engineered prior to Hodgson's arrival goes down in flames, club without a left-back...something tells me the stooges up top would still find a way to get rid of him.

---Hodgson has done a bit of a 180 on the Torres exit talk, stating today that he fully expects the striker to return. Two days after he stated that he's unsure and that Torres had beef with the club, this seems like good news. Until two days from now, when he's sold to Chelsea for $12.

---Shamefully and keeping with my inability to be original, Liverpool Offside now has a Twitter account. I've been lingering in the shadows since I started it in April, and true to form I forgot about it for three months until someone randomly started following me. I've started providing links so far, and I'll likely post semi-regularly. Until I get fed up and disillusioned, at which point I'll post a lot while I'm drinking. Roll on 2010-2011!

Only two days now until the match in Skopje, and despite the uncertainty over who we'll see, I can't help but be excited. Real deal preview up tomorrow with any other news.