Yossi to Chelsea and Thoughts on Roy Hodgson's First Interview

Share All sharing options for: Yossi to Chelsea and Thoughts on Roy Hodgson's First Interview 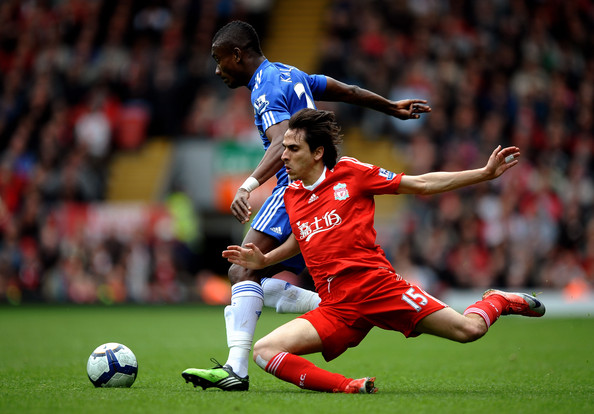 The move to Chelsea confirmed and Hodgson starts to settle in.

We've known this was in the works for well over a month now, but it doesn't take away from the fact that he'll be sorely missed. The club confirmed today that terms had been agreed about a month ago, meaning that the rumors about his imminent departure were actually on point. No word on the actual compensation included, but it's a three year deal that will see Benayoun return to London after he joined Liverpool from West Ham in 2007.

Since it's been in the works (and apparently agreed-upon) for awhile, there's no need for me to keep repeating myself. Instead, I'll quote myself, and then get embarrassed about feeling that I'm worth quoting. Anyway, here's what I wrote about his departure a few weeks back:

If you’ve been around the site in the past few months, you’re likely able to anticipate my reaction, which will involve denial, crying, cursing, and heavy drinking. The prolonged nature of the exit does make it a little easier to deal with, but in the end it’s still a reality that Liverpool are very close to losing one of their most consistently passionate squad members.

You’ll read that he’s Joe Cole’s replacement, and Chelsea fans will probably not be jumping out of their seat at the prospect of picking up the Israeli. But since he cracked the first team in the second half of last season, he’s been an integral on-field presence for both the measurable and the immeasurable. And in this season, one that saw far too much pouting and petulance from other, more noticeable first-teamers, Yossi was a fine professional who never caused any questions about his effort. And as I’ve mentioned in the past, if you watch any highlight video in which Liverpool score and Benayoun’s around the goal, you know you’re getting unbridled joy—not just for himself, but for the club and his teammates.

Sad day for me, as Yossi was obviously one of my favorites, and it'll be tough to see him in a blue shirt. But hopefully things turn out well for him and he'll be able to make the sort of impact he has for Liverpool in the past few seasons...just not against Liverpool.

For me, this means that the search for a left winger just got a lot more urgent. Not exactly world-class insight, but it makes the gaping hole on the left side of midfield that much larger. Yossi was never a true left wing, but his adaptability and skill on the ball made him more than serviceable. Albert Riera is still with the club, and while Rafa leaving might have him thinking he's out of the doghouse, I can't imagine he's going to play much of a part. Ryan Babel is the only other player with any experience on that flank, and he was inconsistent in both appearances and performances under Rafa, meaning that the new boss has his work cut out for him.

And it's apparently a fact that's not lost on Hodgson. He's obviously been under the spotlight since his appointment as new manager was announced yesterday, and as such he's had the pleasure of giving more than a few interviews. There's the standard fare---it's a huge job, what an honor, Liverpool are a great club, etc. etc.

What's been refreshing about the responses that Hodgson has given is that there's not much cat-and-mouse going on. I said in the comment section of yesterday's post that things with Rafa got bizarre, and whether or not this was a result of the problems in the boardroom, it was tough to watch and read at times. So maybe it's just the fact that Roy is the new boy, or that he's English, or that he's not yet been beaten down by the backroom circus. And of course, a few good quotes in an interview isn't exactly the greatest measuring stick of future success.

But at least initially, he strikes me as forthright and well-aware of what he's at the club to do:

"Well, I am confident that as long as the quality of the players remains that would be expected at Liverpool Football Club and as long as we try to maintain the good work ethos of the players - you know, sweating blood for the shirt - I see no reason why we cannot win things in the future. I can't pretend that the situation is not somewhat different to the situations that Rafa Benitez and Gerard Houllier had when they first came to the club. My job, as the Chairman said, will to some extent be to steady the ship, but there is no doubt that the club's ambitions remain as high as they ever were."

The only irony here, and a sad one at that, is that the situation he's in isn't a product of the shortcomings of Rafa Benitez (or Gerard Houllier for that matter). The need for stability is down to those at the top, meaning that if he does accomplish any ship-steadying, it's going to be in spite of the front office hand he's been dealt.

So as I said yesterday, welcome and good luck. In a few short weeks we'll have a chance to measure the man based on what Liverpool are able to achieve on the pitch, and that's exactly how it should be.