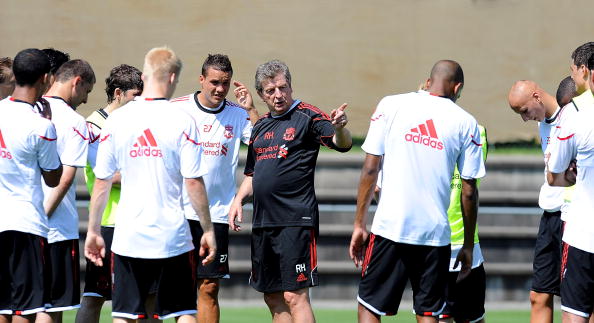 Liverpool's first friendly of the year against the Saudi champions.

Teamsheet when it's released.

So this was what I had prepared prior to just finding out that the match has been canceled due to unplayable conditions on the pitch. First friendly now scheduled for Wednesday against Grasshopper. Add this to the sale of Insua and you've got a recipe for a day of drinking.

Today brings our first look at Roy Hodgson's Liverpool, even if the squad we see today will be drastically different than what we'll see come July 25th. The squad he's named today has one glaring omission---Emiliano Insua. At the time of writing, news had just broken that the club agreed a fee with Fiorentina for the sale of the Argentinean left back. I just don't get it. Unless he was asking away, there's no earthly reason to let go the only true left back in the squad. As I mentioned yesterday, he's young, he's talented, and he was clearly growing into a regular first-teamer. This has to ramp up activity in the transfer market---this is not a great time to be without a left back.

That aside, there's plenty of younger talent was named in the 20-man, and there's a healthy mixture of first-teamers with the youth. Maybe the only real surprise continues to be the inclusion of Albert Riera after what occurred during the final months of the 2009-2010 season. He appears to be back in the good graces of the club (or at least Roy Hodgson), which means that the problem with Rafa Benitez managed to stay relatively isolated. Even with Rafa gone, though, there's not a lot of positivity surrounding Riera. If we're having this discussion in September, I think I'll still be surprised.

The only new signing in the squad is Jonjo Shelvey, who's likely a second-half substitute up front. Milan Jovanovic didn't make it into the squad, but after playing in the World Cup I'm sure they're wanting to give him a bit of a rest from competitive action.

I'd make the effort of listing some things to watch for, but when I combine the disappointment of the Insua sale with the fact that I know nothing about Al-Hilal I'm content to conclude that, outside of avoiding injuries, I have little invested in the match. Obviously I'm excited to see the younger players and Shelvey, but I think we can agree that coming through on the other side without incident is the main concern.

Check the stream links above or the comments section for a working stream, and feel free to share if you've got one.