Rafa Offered £3 million to Leave: Does This Count as Real News?

Share All sharing options for: Rafa Offered £3 million to Leave: Does This Count as Real News?

I've gotten used to flipping through LFC Live multiple times a day in some sort of jaded half-attentive state. Given the most popular formula for recent Liverpool news (Name + Name Leaving + Owners = Apocalypse), I don't think I can be blamed.

And then there's this: 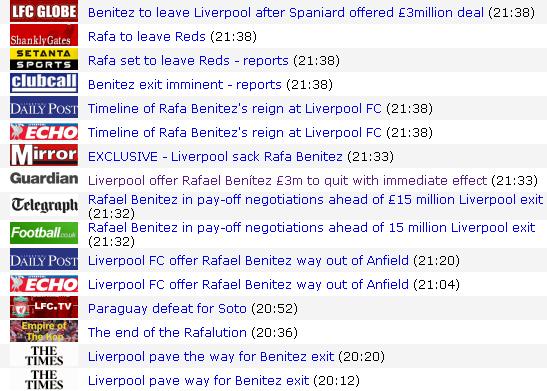 Just like that, it seems that we have an actual story in the works, and it's unfortunately not the one about Greece dropping a friendly to Paraguay---Liverpool and its board have offered Rafa a compensation of £3 million if he leaves the club immediately. From the Guardian, and everywhere else:

Liverpool have given the clearest indication yet that Rafael Benítez's six-year spell in charge is drawing to a close by offering their manager £3m to leave Anfield. It is believed the Spaniard, entitled to £16m if sacked this summer, has been offered the lesser sum to quit with immediate effect.

Benítez's position has been in serious doubt since January when Juventus targeted the 50-year-old to replace Ciro Ferrara. The Liverpool manager allowed that opportunity to pass in the hope of staying at Anfield, providing he obtained assurances over the club's transfer budget and search for new investment. However, with the club unable or unwilling to provide Benítez with those guarantees, the Liverpool board has presented Benítez with a shock exit route.

The former Valencia coach has held several rounds of talks with the Liverpool chairman, Martin Broughton, in recent weeks, where he outlined his strategy for restoring the club's fortunes following a dispiriting campaign involving an early exit from the Champions League and a seventh-place finish in the Premier League.

He is understood to have stressed that Liverpool cannot recover without an end to Tom Hicks' and George Gillett's calamitous ownership or without a commitment to reinvest in the squad should Fernando Torres and Steven Gerrard decide to leave this summer. Liverpool's best two players have both said they will consider their futures after the World Cup and Marca, the Spanish sports paper with close ties to Real Madrid, yesterday announced that Gerrard is the principal target of Real Madrid's new manager, José Mourinho.

So Rafa's been given a way out of a situation that, by all accounts, has no real signs of getting better. And by better, I of course mean that the club is sold from the most cancerous of ownerships. It's become the most polarizing of affairs---Rafa wants the owners gone, and now the board has stated their intent, which has to be worrying for any Liverpool fan.

But it's important to remember that this isn't "Rafa Sacked" or "Rafa Leaves Liverpool to Open Sushi Bar." On the contrary, there's actually nothing definitive outside of an offer being made from the board to save them the very difficult choice of swallowing a further £16 million should they actually do something. Ostensibly the ball is in Rafa's court, but the volume and timing of this is what we've unfortunately come to expect from Liverpool's boardroom.

I've been lamenting the slow summer for Liverpool news. This, however, is far from what I had in mind. I don't know that any resolution here is a good one---if he declines, he's painted in the press as vindictive, stubborn, unwilling to do what's "right" for the club who gave him so much time. If he goes, you can't help but start to have very real fears that despite assurances to the contrary, this ownership debacle is not one that's righting itself with any sort of urgency.