Share All sharing options for: Liverpool at the World Cup: Weekend Preview 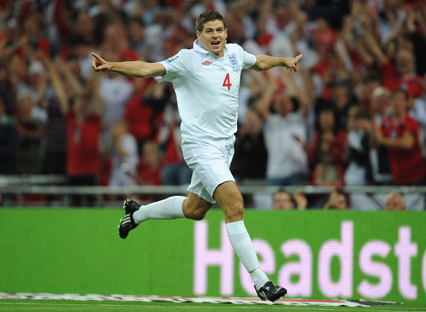 Possible action for five of Liverpool's internationals this Saturday.

It starts tomorrow at 10:00am EST with South Africa v. Mexico, and in terms of my social life it's all downhill from there. The two matches tomorrow (Uruguay v. France being the other) are the fewest on a day until June 26th when the knockout stages begin. Between now and then---at least three per day, with four per day on June 22nd through June 25th. For a world football fan, it's time to geek out.

And for a Liverpool fan, this Saturday is going to be as good as it gets, at least numerically. There's a good possibility that five of Liverpool's squad members could be in action, as Argentina takes on Nigeria and, in a match few of you have probably heard about, England faces the US.

Javier Mascherano, Steven Gerrard, and Glen Johnson are probably the sure choices to start, although Maxi Rodriguez and Jamie Carragher have both seen action in their sides' final friendlies. Maxi notched an early brace against Canada, but the Argentina World Cup Blog doesn't see a place for him come Saturday. And Carra's been a part of each of England's friendly matches during the final run-in, but Ledley King seems to be the favorite to replace the injured Rio Ferdinand.

As for the regulars mentioned above, Gerrard's the only one without a cemented place on the pitch. He'll no doubt be in the starting eleven as captain, but with the injury to Gareth Barry there's a chance we could see the dreaded Gerrard-Lampard combo in central midfield. Fabio Capello seems to think that there's no issues here, so seeing Gerrard in some sort of central role come Saturday wouldn't be a huge surprise.

With Mascherano and Johnson, though, it's pretty clear where they'll be. Johnson's the first-choice right back by some distance (which happens when there's no other right backs in the squad) and Mascherano will captain Argentina from defensive midfield. Both have heaps of responsibility---Johnson is tasked with getting forward while simultaneously locking down either Clint Dempsey or Landon Donovan, and Masch will have his usual duties of disrupting the opposition's forward movement in midfield.

It's going to be an absolutely crazy month, and I think for Liverpool fans it couldn't come at a better time. World Cup summers are notorious for slowing things down on a club level, and I think that's just what the doctor ordered. It's high time that as a club, Liverpool start to conduct their business away from the spotlight. No better time than now, when all of the footballing world will rightfully have their eyes on South Africa.