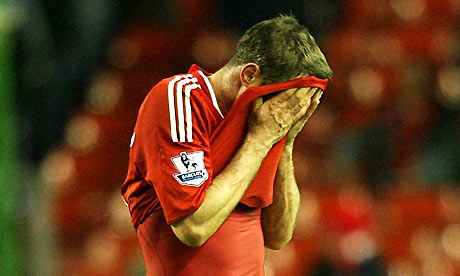 I never liked you much anyway.

A match that, unfortunately, very much lived up to its "neither team has anything left to play for" billing. A few chances for both sides, flashes of skill from the usual suspects, but all-in-all, a fitting end to one of the most painful campaigns in recent memory. And Liverpool still finished seventh, with a very real chance at nicking the sixth spot. But, fitting for this year, it wasn't to be.

Part of me feels bad for the insufferable amount of bitching that I've done this season---to finish seventh, qualifying for European football next season, with the potential for optimism through new ownership, investment, and talent, is an enviable position for many other clubs. But recent years have inspired us to expect more from Liverpool, and this is a season in which you couldn't help but feel let down.

And in many ways, today's match was the season in a nutshell. Some puzzling squad selections partially forced by fitness and form---Nabil El Zhar was maybe the most shocking, but we also saw Yossi Benayoun completely missing from the squad with no indication as to why. We've discussed this plenty in the past week, but hopefully it's not an indication of an imminent departure.

The first half was marked by a couple of half-chances for both sides, the most notable of which came nearing the break. Mark Cullen narrowly missed putting Hull in front from a header in the 37th minute, and Alberto Aquilani hit the crossbar just before the end of the half after a scrum in the Hull box. Outside of that, and in between broken streams, you couldn't possibly avoid the fact that this was every bit a "last day of the season" fixture.

The second half started with more of the same, and it was Hull who exerted more force in attack. They were unlucky not to have notched at least one, with a number of set pieces near or around the edge of the area, and on a few occasions Pepe Reina was forced into action. Liverpool weren't able to get much going until it was too late---although we did see some vintage stuff from Steven Gerrard, first with a shot flashed wide from just outside the box, then with a driving run through the middle that saw his effort glance off the post. And a final chance from substitute Dani Pacheco was parried away by Matt Duke, and while the rebound initially looked dangerous, there was nothing doing.

It was disappointing, it was harsh, and it was, paradoxically, welcomed. As much as I hope for the best for Liverpool, it would have been odd to see things go their way today. It would have been even stranger if they had made things go their way, but that's not in this year's side. Whether it's lack of skill, lack of desire, lack of passion, etc. etc., this iteration of Liverpool didn't have it.

But that doesn't mean we can't take anything away from today or the season. Alberto Aquilani continued to shine, and hopefully rumors of his departure are greatly exaggerated. I think there's truly something special in the cards for Liverpool if he stays fit and sticks around. And it came dreadfully too late, but Steven Gerrard showed some of the steel and forcefulness we've waited for with a couple of late efforts. Milestones for Jamie Carragher and Dirk Kuyt were rightfully celebrated, as each man has been a pivotal part of keeping the club moving forward. Plus, another set of Golden Gloves for Pepe Reina (or just one for the split with Cech?), Liverpool's player of the season by a mile. And the appearances of Dani Pacheco and record-setter Jack Robinson, whether it was simply for show or not, was a nod to the club's future.

It will likely take awhile for the finality of such a season to set in, but the offseason won't allow for much reminiscing. Today was as good an indicator as any that many, many things need changing at Liverpool, and if, as Martin Broughton indicated earlier in the week, these changes are coming in the next few months, we won't be deprived of action. Let's hope that it's action that moves the club forward, because today was far too familiar and far too painful.

I'll be putting together some end of the year stuff in the next few days and weeks in addition to trying to keep tabs on the schizophrenia we'll surely see. It's been...a season.