1,000 Posts for the Liverpool Offside

Share All sharing options for: 1,000 Posts for the Liverpool Offside 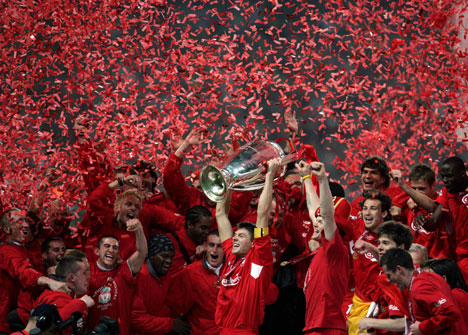 Because 1,000 posts is just like a Champions League victory.

Given the dearth of actual news lately, at least besides news that makes you want to put a hole in your monitor, it's as good a time as any to run an acknowledgment that serves as the 1,000th post for the Liverpool Offside. So it doesn't really qualify as news, but it's something.

I won't actually try to count how many of the posts I'm responsible for, but I can be sure that it's somewhere around 10% of the total posts and 97% of the posts you don't like. I started around February of last season, faded into oblivion over the summer, and made a return around November of this year, and have thoroughly enjoyed the time I've spent writing about the club. And getting insulted!

By my count, there's been nine bloggers total for the site, and thanks goes out to each of them for all the hard work they put in over the past few years to keep things moving in the right direction. So Jim, Brian, ed_, Stop., CSD, JRW, Nadia, and Kai, well done. There's been some unbelievable quality in the writing on the site over the years, and much of it came prior to my residency. And I know where some of you are on the internet (not in a creepy stalker way, but in a more appreciative, still stalkerish way), but not most. So drop a line if you're still around in some capacity, I'd love to get your take on how things are going with Liverpool as well as the blog.

And thanks to all the commenters and lurkers, frequent visitors and those who are new to the site. It continues to be one of the more frequently visited sites on the Offside, and besides those who visit that just feel bad for me (hi Mom), I'd guess there's also a good amount of you who feel like there's something worth reading. Please let me know if there's things you'd like to see more of, less of, etc. etc. I have a feeling that the summer months won't be without incident, but I'm open to anything. Except discussions about the potential of the moon disappearing, because that's too scary.

I know it's been a tough year for the club and its supporters, but it's also been a good indicator on a personal level that my love for Liverpool, and hopefully yours as well, goes far beyond what we see on the score sheet or in the table. That being said, they better f***ing pick it up next season.

Back later on today or tomorrow with more pseudonews, and something a little less self-serving ahead of Sunday's finale at the KC.