Yossi's Future, Rafa's Questions, and the Calm Before the Storm

Share All sharing options for: Yossi's Future, Rafa's Questions, and the Calm Before the Storm 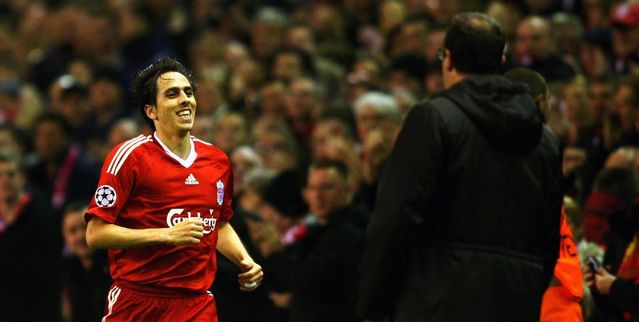 Consider this week the prologue to a very dramatic, very drawn-out offseason. And as such, there's a couple important pieces of news to filter through.

The first is the as yet undetermined future of Yossi Benayoun, who today commented on the difficulty of making plans when the room around you is on fire. As usual, hit the link for the complete story from the Guardian, but below is the most ominous bit:

"If it depended on me, I would stay here and retire in Liverpool. The fans are the best in the world, but it depends on a lot of things. It will be very clear soon and we will just have to see in a few weeks."

It's an indictment of the club and its organizational shortcomings that a player like Yossi Benayoun needs to be concerned about his future at the club. After arriving prior to the 2007-2008 season, he's worked his way into a role as one of the more dependable sources of creativity in the side, and despite having a few bumps along the way, he's cemented himself as a firm favorite. It was no surprise that his potential winner against Atletico last Thursday was such an emotional experience---the man looked damn near tears after netting, and by all accounts he's someone that's committed to moving forward with the club.

If there's any downside to Benayoun, it's that the position he's probably best suited for is one that's got two "bigger" names ahead of him---obviously I'm referring to a spot in central midfield. He's been deployed on the left wing this season in nearly all of his appearances, but you can tell he's somebody that, in any other side, would do wonders in the central part of the pitch. And more often than not, he finds his way there anyhow. If the attack from the wide areas in a 4-2-3-1 is supposed to come from the fullbacks, Benayoun's lack of "typical winger" style shouldn't matter much, and he always seems to find a way to make an impact.

And as is always the case with me, I'm most pleased by what he brings to the team outside of technical ability. Liverpool have got stoicism in spades, but Benayoun is much more visibly emotional, and his effort is never in doubt. Dirk Kuyt gets most of the plaudits for running himself ragged, and those are rightly earned. But Yossi's closer to the heart of the team, or at least the type of heart I'd hope for from Liverpool. He's mature, he's passionate, and he's committed. If he leaves, I think it'll be a major blow for the club.

The other major news piece today is, unsurprisingly, focused on Rafa. The Juventus rumors hit a fever pitch this week and never died down, and apparently now even he's unsure of how things will shake out. From the man himself (and the Daily Express):

Maybe the Public Relations department and Rafa got their signals crossed about sending out a message that assuages the fears of Liverpool supporters.

Whether he stays or goes, these are questions that need to be answered. I think things will be a lot clearer after Rafa actually meets Martin Broughton, but "clearer" doesn't necessarily mean better. And I think Rafa's dead-on that much of what's been written lately has been with the intent of stirring things up and making a mess. But with so much uncertainty, what are parasites with keyboards and broadband supposed to do?

What's certain, though, is that the coming weeks won't be uneventful. There's still a match to play, there's still meetings to be had, and it's obvious that there's many questions to answer. Oh, happy days are here.