Share All sharing options for: Season Review 2009-2010: Player of the Year 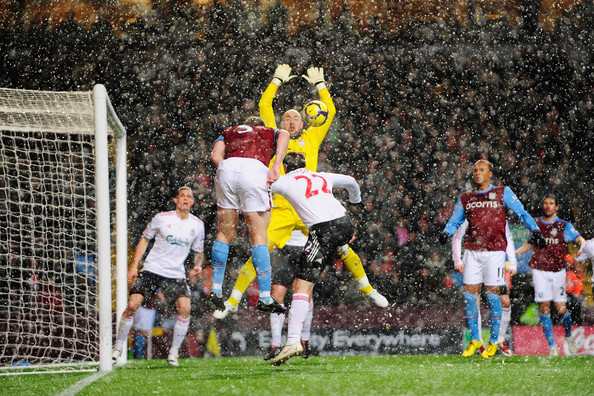 Player of the Year Poll Results:

Turns out this was a foregone conclusion for everybody else, too.

There's not much left to say about Liverpool's number one, particularly after a season in which we were all made acutely aware of just how important he is to the side. His influence has been growing slowly but surely since he joined Liverpool from Villareal in 2005, and in the 2009-2010 season he cemented himself as one of the clear leaders in this Liverpool side.

He was the only player to start all 38 Premier League matches, a feat he accomplished for the third consecutive year, and kept 17 clean sheets in a season that still saw Liverpool lose eleven games in league. Were it not for the four less games that Petr Cech played in keeping the same number of clean sheets, it would have been Reina's fourth Golden Gloves honor in five seasons. No small feat considering the names at the top---Cech, Edwin Van der Sar, Brad Friedel, etc. And Reina missing out on the "official" squad of the year listings was, in a word, astonishing.

To top things, he basically made love to Liverpool supporters' hearts and minds all season long, proclaiming his love for the city, for the club, and for the fans despite the hardships of the campaign. It's little surprise that he was named Player of the Season by the official club site as well, and his humility and frank response to the honor were also to be expected:

"I feel a bit mixed because when a goalkeeper wins this kind of award, it's never a good thing," he explained to Liverpoolfc.tv.Thanks to the fans, and of course I am really proud to win, but let's hope next season a striker or midfielder will get the award. People recognise my job and it's always good to hear that, but as I say we have to try to turn the attention on the outfield players and make my job a bit easier next season.

"I am happy with the things I have done, but not one of us can be happy because of the season we've had," he said. No matter what you do, it's about the team. All of us are really disappointed. It's been a hell of a year with injuries. Fernando, Stevie, Glen, the centre-backs - we've been in a lot of trouble with injuries, so it's always difficult to prepare for a season like that.

"But it's no excuse - we should have done better and we didn't."

So of course he's been lauded as a captain of the future by Jamie Carragher and Rafa Benitez---Reina has come to symbolize everything left that is good about Liverpool. To be able to say that after such a tough season speaks volumes about the man and his character. He's passionate, he's committed, and his quality is very nearly unmatched.

As I said, it's a shame that it took such a season to bring his importance to light, but I don't think there can be any mistaking that he's likely to be a contender for player of the year for seasons to come. Congratulations are due for him, and let's hope there's plenty in store for the future.