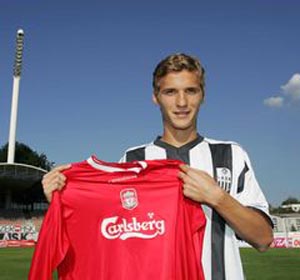 Some sad news today out of Austria. Former Liverpool player Besian Idrizaj, age 22, died of an apparent heart attack early Saturday morning. Idrizaj was mostly involved with the reserves, and his most memorable moment in a Liverpool shirt came during a pre-season match against Wrexham in 2007 when he scored a 23-minute hat-trick. He was loaned to a number of clubs, and most recently featured for Swansea City. It's always upsetting to learn about the passing of a former player, but his age makes this one especially saddening.