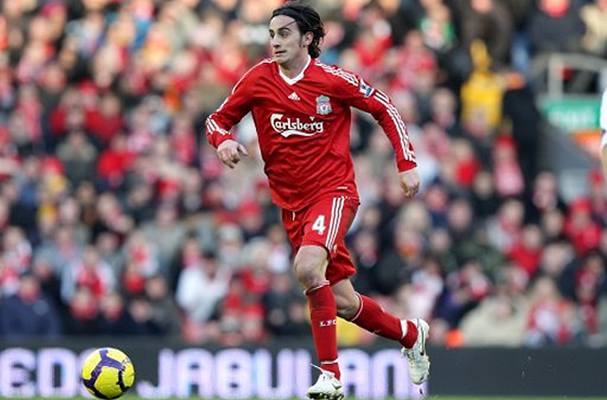 "All I know is just what I read in the papers, and that's an alibi for my ignorance."

I certainly don't plan to go player-by-player in this manner for the season review, except for the massively surprising Player of the Year post.

However, I can't ignore the season reviews I've read over the past few days regarding Liverpool and, of course, Alberto Aquilani in particular. Let's take a look at some of the fine work being done:

David Maddock, Mirror Football: "Injury prone and totally unsuited to the Premier League, he has to rank as one of Liverpool’s worst-ever signings. 3/10 (also named Villain of the Year)

Sky Sports: "Flop of the Season"

And so on and so forth, with other headlines reading "Liverpool to flog flop Aquilani for loss of £13million" and "Liverpool set to ditch Alberto Aquilani" and paradoxically hailing him as the "new Torben Piechnik." Who, incidentally, was basically one-and-done with the Reds after their inaugural Premier League campaign was a (sixth-place) disaster.

This isn't a new thing, and it's probably just me being over-sensitive to the issue. I think we can all acknowledge that £20m is a hell of a lot of money, and if it were a one-year transfer it would have surely created a hole in the earth. And there's no disputing that he struggled with injuries and form, and when he was initially worked into the side it was a bumpy affair. He looked out of sorts in his first appearances, probably tried a bit too hard, and had trouble gelling with nearly everyone.

But as he adjusted to the team, and, maybe more importantly, as Rafa and company adjusted to him, it was clear that he anything but a flop. That, however, is only if you're looking past your own nose. Playing in a more advanced role (suggested by Roma supporters back in December), he had a positive influence and seemed to settle into what was previously the "Gerrard role." His last few appearances were met with great acclaim---at least by Liverpool supporters and those who hadn't completely subscribed to the narrative that he was an utter failure regardless of what he did.

Little by little, Aquilani started to come into his own. With so few appearances, it was impossible to do anything more than that. His distribution and movement was still imperfect, and he was still trying too hard. But that's what you do when everyone in the English-speaking world is labeling you as the worst signing on the planet. To his credit, though, he started to play more within himself and appeared more comfortable. His goals against Portsmouth and Atlético, in addition to a handful of assists, were the only returns on the stat sheet, but his improvement and quality were more than evident.

Essentially, he's singled out on the basis of being a new boy (foreign, no less) in a season in which nearly nobody hit top form or fitness. He was bought injured, and that's never going to be a policy that garners universal acclaim. His recovery took longer than expected, he clearly wasn't match fit even when he was "fully fit," and when he finally arrived in the first team as a quasi-regular selection, there was little to salvage of the season.

But to proclaim that he's a flop, that he's unsuited for the Premier League, and that he's Liverpool's worst of the season is little more than the same lazy journalism we've become accustomed to. Aquilani's improvement in the last few weeks of the season is (in my second reference of the last month) another Barack Obama birth certificate. The sensationalism and laziness we read in the press draws on specifically selected bits of information that line up with an already created argument, and anything that contradicts the narrative (namely, facts and truth) is dismissed. Better performance? Nah, it's a one-off. Showing improvement? He was £20m. Chance at making himself a consistent first-teamer? He'll get hurt.

I won't deny that he has a long way to go---nine appearances in league and a handful in Europe doesn't exactly make him next year's player of the season. He's going to have to change a lot of minds about his ability to maintain fitness across a full season, but that's something that can't be judged until he's had a chance. And Liverpool's offseason is probably going to be bumpy as hell, and he'll be tasked with getting to know some new faces while still getting oriented himself.

So I'm probably howling at the moon again and, as I mentioned above, hypersensitive to the criticism that I feel is largely unfounded. But I can't see past the ignorance in writing him off prior to taking the pitch, while he's on the pitch, and after he's experienced success on the pitch. It's sad that we've come to expect this, but it's troubling when it's on such a large scale.

Which is a good indicator that either everyone else is wrong or I'm wrong. And it's important to note that I'm never wrong.