Share All sharing options for: Season Review 2009-2010: Vote for Goal of the Year 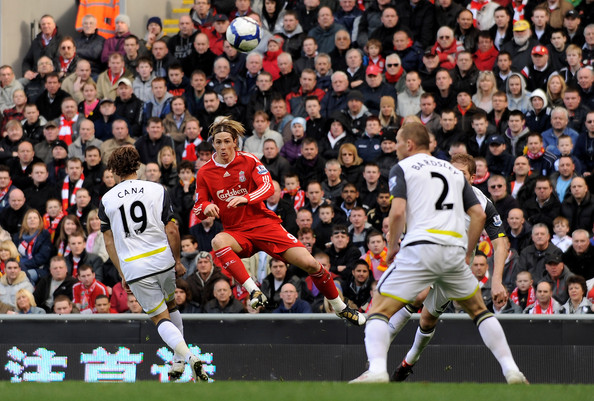 Not a season of great collective achievement, but some brilliant moments.

In a year when the goals ultimately added to nothing, it's tough to get rallied around the idea that there were still moments worth celebrating. But looking back at some of the goals scored, I can't help but awe at the skill involved and the joy these moments provided. In chronological order, then, with the poll at the bottom:

At 1:22 above, the captain hits a fantastic volley in the 83rd minute to take all three points.

The opener and match-winner in Liverpool's biggest win of the season.

The young left-back's first for the club came in remarkable fashion at the Emirates.

Torres again at 2:25 above (yes, I realize I should just use that video as the post), this time with one that equalized just before the half, completely out of nothing.

Probably the most forceful of the nominees, Babel with an absolute jackhammer away to Lyon. For seven minutes it looked to save Liverpool's Champions League campaign, but defensive frailties cast this one into irrelevance.

The goal that confirmed to my father-in-law that I am, in fact, an idiot. This injury-time winner just before the new year sent my laptop flying and me through my in-laws' roof, and was probably the most emotionally-charged goal to that point of the season. Provided plenty of hope that things were turning around.

A couple of times now the Argentine has connected from distance, and when he does it's absolutely smashing, as we see above.

The banner pic, and another moment of complete and utter brilliance. No bias from me.

An expertly worked free-kick saw Agger net his first of the year in uncharacteristically styling fashion.

Not exactly what you expect from Lucas given his occasional propensity for clumsy challenges, this nimble rounding of the keeper in the return leg against Benfica sent Liverpool on their way.

His first was extremely fortunate at best, but this curling effort from fully twenty yards was vintage Steven Gerrard. Come back, please?

Only his second of the year, but it was a huge one as Liverpool leveled the tie with Atlético at Anfield. Great skill from the Italian, who really came alive in the later part of the season. Partially because he played.

So there you go, twelve unforgettable goals in a largely forgettable season. Vote below.

What was Liverpool's Goal of the Year?online survey