Liverpool at the World Cup: Updated

Share All sharing options for: Liverpool at the World Cup: Updated 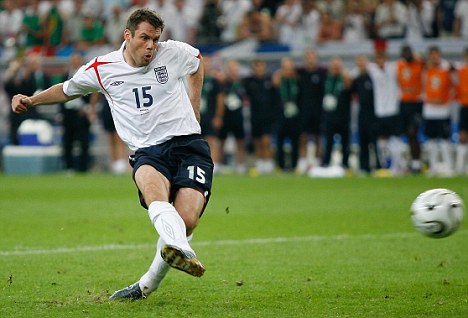 Confirmation on all the relevant names.

It's finally confirmed today that Jamie Carragher will return from international retirement and has been named in England's 30-man provisional squad ahead of the World Cup. The speculation seemingly kicked up out of nowhere in the last week or so---we went from absolutely no news to "he's a lock in the provisional, which makes him a lock for the finals."

But he's in, and it does seem to make sense that he'd be part of the finals squad given the other names announced in defense. Fabio Capello's been particularly ruthless in his selections since taking over the job as England head man, so you know there won't be any sentimentality attached to selecting a more experienced player over another. Although with the naming of Carragher, there can't be any sentimentality involved, since he basically said the national team didn't mean d**k to him. Sign him up!

Taking a look at the other names in defense, it seems clear that Carra is probably the most versatile inclusion. Correct me if I'm wrong, but none of other center backs named---Rio Ferdinand, John Terry, Ledley King, Michael Dawson, Matthew Upson---are particularly fleet of foot or skilled in a wing back role, and while Carra's no gazelle, he's got experience at right back and can serve as an immediate fill-in should Glen Johnson's fitness worries linger. Plus, if his attitude and commitment match what he's done for Liverpool (and belie the statements he made in his autobiography), he'll have an immeasurable impact on the side.

Of course, he is aging, he did tell England to f**k off, and he's coming off one of the worst Liverpool seasons in recent memory. It's hard to say what exactly this means for Liverpool as a club---it could be a complete change of heart regarding the national team, it could be Carra wanting more after a dismal season for the Reds, or it could be Capello begging him to come back as cover. And in the midst of writing this, we find out why. From the official site:

"The FA got in touch and asked if I would have a rethink, due to injury problems. I said I would make myself available. The World Cup and Champions League are the highest levels of football. I'm not getting any younger, we have no Champions League football next season and I am keen to work under Fabio Capello."

Well there you go.

The most worrisome piece for me is his age (32), which he mentions, and the lack of rest that will come about as a result of his inclusion. Should he make the 23-man finals squad and play regularly, he (along with Gerrard and Johnson) would have only a matter of weeks prior to starting the Europa League qualifying campaign. It's likely that the senior members of the squad (hopefully) wouldn't have much of a role to play in the early qualifying stages, but they'll surely be needed at some point.

Regardless, it's got to be an honor for Carra as well as the other names mentioned. And while we don't have any news on Glen Johnson's fitness, Fabio Capello has jumped on the Steven Gerrard bandwagon, touting the Liverpool captain as "one of the most important players" in the England squad. On form, no doubt. After this season, though, it'll be interesting to see how Gerrard recovers. We saw ten good minutes at the end of Sunday's match, but on the whole you'd have to say it was his worst season in some time. It's not a death sentence for his World Cup ambitions, and hopefully he'll hit his form in South Africa and head into next season ready to go. More at the England World Cup blog.

Outside of the England squad, there's still a good number of Liverpool players to be named in their respective sides for the World Cup. A few have been confirmed:

**Fernando Torres and Pepe Reina make the Spain squad despite the lingering injury of the former. The most recent reports have him as a question for the first match of the tournament, but hopefully he'll make a speedy recovery. As for Reina, it's not likely that he'll displace Iker Casillas despite working his way into the conversation as one of the top goalkeepers on the continent. And while there's five keepers in the provisional squad, I can't see a scenario that sees Pepe miss the trip. More at the Spain World Cup blog.

**Daniel Agger, as expected, is included in the Danish provisional squad and has to be an easy choice for first-choice center back. He'll have to be on top form if Denmark progress past the group stages---they'll face the Netherlands, Cameroon, and Japan. While it's not the "Group of Death," it'll be a tall task for the Danish, especially if Thomas Sorensen misses out. More at the Denmark World Cup blog.

**Sotirios Kyrgiakos was named to the provisional squad for Greece and took part in training camp last week, and like Agger, he'll have his hands full come the group stages---South Korea, Nigeria, and Argentina await Greece in Group B. The Greek is probably an outside shot for the starting eleven, and if his performance against Senegal back in March is any indication, he might find himself on the bench come June 12. More at the Greece World Cup blog.

**Martin Skrtel makes the Slovakian provisional squad, but as the FIFA release notes, he hasn't featured in first-team action since late February. He did make a return to full training recently, though, and I'd guess that between now and June he'll be fully fit. More at the Slovakia World Cup blog.

**Dirk Kuyt and Ryan Babel both make the Dutch squad. The latter has to be somewhat of an outsider, as his relative inconsistencies in terms of form and playing time probably don't help much. But he did much better when given chances in the second half of the season and is a decent option off the bench. And Kuyt has to be a lock for the squad and a likely starter in an attack that will feature Robin van Persie and Arjen Robben. More at the Netherlands World Cup blog.

**And the lingering names were in the hands of Diego Maradona, which is never a comfortable situation. He's apparently released his selections, and there's room for Maxi Rodriguez and Javier Mascherano, but no Emiliano Insua. There's also no room for Lucho Gonzalez, who, I've mentioned in the past, was an absolute beast for me in FIFA 07's manager mode. Sad, sad stuff. More at the Argentina World Cup blog, where the discussion is...decidedly not optimistic.

End of the season stuff coming intermittently---but expect few surprises on the Player of the Year poll, despite a good showing in the comments for the also-rans.

Product shill alert: A reminder that you can get all your World Cup gear at the World Cup Blog store.