Share All sharing options for: Liverpool 4 (5), Benfica 1 (3): Something Special 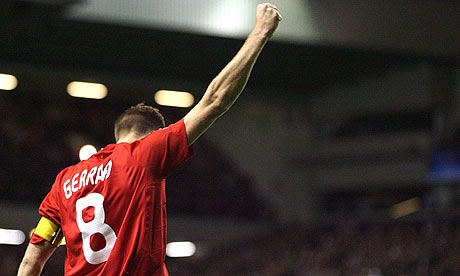 Liverpool storm into the Europa League semis with a 4-1 win over Benfica.

I think one of the most trying aspects of Liverpool's season this year has been the lack of any sort of collective "oompf." Overly technical, I know, but it's been rare that we have actually seen Liverpool click in the manner we witnessed on a more regular basis last season. The memories of March seem so far away---hitting four against United and Real Madrid in a matter of weeks, blanking Villa 5-0, putting forth the type of display that gave Liverpool the distinction of being one of the most dangerous clubs on the continent. The victories this season, even the big ones, haven't had that same cutting edge, that same feeling that we were witnessing something truly special.

Enter Benfica. Top of the Portugese League, scoring goals for fun domestically and in the Europa League, possessing a brand of football that is widely accepted as some of the most attractive on the continent. They came away from the first leg with a 2-1 victory, but in truth likely should have had four or five at the least. Uncompromising in their approach, it seemed that they had just as good a chance to progress as Liverpool. Even with the absence of Javier Saviola, their attacking fortitude is a rare combination of pace, skill, and experience.

And for the first few minutes of the match tonight, it seemed that the aforementioned combination was going to prove too much for Liverpool. They dominated possession, spread the ball around comfortably, even created a chance or two through Angel Di Maria and David Luiz. With a makeshift back line and a bench that was thinned by injury and suspension, it was a worrisome way for things to kick off.

But here's where things got special for Liverpool. They found their balance through possession and patience, creating a couple of chances for Fernando Torres and a blocked effort from Dirk Kuyt. It was a gradual shift in momentum, and you couldn't help but feel that Liverpool were starting to assert themselves in a calm, collected, confident manner. Benfica were forced into their own half, Liverpool's key men in attack were starting to influence proceedings, and the defense had the upper hand. Save for an opening of the floodgates, it was as close to a reminder of last season's peaks as we've had.

And, in a ten minute span, almost on cue, the floodgates opened. Dirk Kuyt's headed effort from a Steven Gerrard corner was the first, followed seven minutes later by a finely worked Lucas Leiva second. The former was initially waved off but rightly overturned, as the main question was whether or not the Greek got a touch, which he didn't. And the latter was created by an inch-perfect through ball by Gerrard, but the finish from Lucas was just as impressive. He coolly rounded Julio Cesar and poked home, and all was right in the world. Liverpool on top in Europe, sweeping aside the opposition.

Remarkably, things only got better. On the GolTV feed, Phil Schoen and Ray Hudson expressed a bit of surprise that Liverpool were still on the attack, and it was an accurate evaluation. But there wasn't anything disorganized or irresponsible about this attack---even when a forward movement broke down, Liverpool recovered quickly, led by another solid performance from Javier Mascherano and the stingy partnership of Jamie Carragher and Sotirios Kyrgiakos. It was the collective performance we've been dying for, and we couldn't have seen it exemplified any better than in Liverpool's brilliant third.

After a Benfica free kick pinged into the box, Glen Johnson swiftly cleared to a breaking Javier Mascherano. You could see that Benfica were caught out, and when Mascherano's forty yard cross-field pass found Yossi Benayoun on the left wing, it was on. Benayoun worked his way into the central part of the pitch, weaving around two defenders before slicing a pass across the box to Dirk Kuyt. And in a move that perfectly summed up the Dutchman's evening, Kuyt stretched as far as possible to get on the end of Benayoun's pass, centering perfectly for Fernando Torres, who couldn't help but tap home. It was a breathless team goal, and one that, offhand, I can't remember being matched this season.

Were it not for the away goals rule, Torres' finish would have surely killed the tie. But after an Oscar Cardozo free kick wormed its way through the wall in the 70th minute, a product of maybe the one mistake made by Liverpool all night, it was a stark reminder of how quickly it could all be broken. It certainly didn't help that Cardozo had another free kick just minutes later, again a deflected effort that seemed bound for Pepe Reina's net. But this time luck was on Liverpool's side, and just as Liverpool hearts worked their way into throats, the shot spun safely wide of the post.

And that's as close as it got. Liverpool never panicked, even though Benfica were inches from taking the upper hand. They reasserted themselves as the dominant force in the match, finding the dagger through another Torres goal in the 82nd minute. Javier Mascherano was again integral, as it was his through ball that freed Torres to go one-on-one with the freshly introduced Moreira, and the Spaniard made no mistake. It was a near-perfect cap to the evening---a goal that was the product of suffocating pressure and gritty determination balanced with a string of moments of individual mastery.

So excuse me if it seems like I'm getting a little worked up, but I truly believe that this is as good as we've seen Liverpool play this season as a team. Not just as a bunch of disaffected individuals clamoring for quickly fading relevance, but as a collective unit that can execute a game plan with stunning efficiency. To a man, Liverpool were the better side, with the individual performances almost equally remarkable. Of special note was the performance of Lucas, who reinvented himself in a manner similar to the home win against Portsmouth. To do so against a more talented side was doubly impressive, and his play was undoubtedly poised. But it's a statement you can make about each man tonight and the team as a whole.

Just a truly, truly quality performance from top to bottom tonight. Maybe it's so impressive because of the way it contrasts with the rest of the season, but I'm inclined to think that by any standard it was a remarkable display. I've purposely avoided any references to the league campaign, because it's almost painful to think that a side capable of this is also culpable for foolish defeats and limp displays. But for now, I'm going to let it sink in, because it's back to an unforgiving reality this Sunday.