Liverpool 1, Birmingham City 1: Thoughts I Wish I'd Had

Share All sharing options for: Liverpool 1, Birmingham City 1: Thoughts I Wish I'd Had 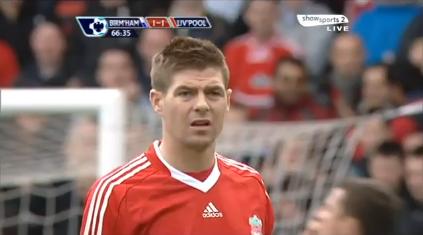 "Gerrard looks like he just found out Alex Curran is his cousin."

Liverpool stutter to a 1-1 draw in a tough match at St. Andrew's.

If you've visited the blog in the last few days you know that I've been traveling across the glorious Midwestern part of the United States for the Easter holiday. As such, I missed what's been a difficult stretch for Liverpool, and my ability to actually watch the matches against Benfica and Brum were restricted by North Dakota's lack of internet, indoor plumbing, and electricity. I relied mostly on a newly purchased Blackberry to keep up-to-date via Soccernet and Goal.com, and was able to piece together a couple of posts and get them up thanks to Daryl and my dad. The latter of whom, incidentally, still thinks I write like an idiot. Tough love.

So please excuse the piecemeal "analysis" (if you want to call it that) of the Benfica match, the Birmingham City preview, and what will follow below. My exile from civilization won't allow more than an aggregation of the thoughts of others; most importantly, the thoughts of one of my best friends. I referenced him a few months ago when Liverpool were preparing to face Everton in the second derby match of the year---he's the one who shares a last name with a certain former Blues loanee and was near a breaking point when thinking about the potential consequences of said loanee netting a match winner.

He kept me updated with non-robotic, overly-emotional text messages during my drive home from North Dakota---in some cases confirming the analysis found elsewhere, in some cases making Descartes look like Heidi Montag. Not physically, we all know Descartes was much better looking.

Anyway, a sampling of the best bits that will double as my match recap:

"As you might imagine, not much to talk about. F**k, nevermind, Maxi off the crossbar. I actually don't think he's ever going to score for Liverpool."

"And then there's Lucas, he's so bad it's incredible. He's playing like he put on his prosthetic leg without the hinge today."

"Jesus what a brutal half. The pace is so slow, even Kuyt is walking around. Torres is back on the body wah wagon, Lucas sucks, I need more coffee."

"Wow, Ngog on for Torres...Rafa getting savaged by the commentators and fans. Steven Gerrard looks like he just found out Alex Curran is his cousin. Maybe third cousin---confused, disgusted, not entirely surprised. Priceless."

"Aqua on for Kuyt, let him be judged for ten minutes. Unless he turns St. Andrew's into Shaolin Soccer, he's back to being the biggest bust since Ryan Leaf. F***ing press."

"F**k, draw, so many good chances, Ngog and Maxi both should have scored. At least put it on target, have the courage to do what is necessary, the kind of people who wouldn't be able to punch a horse in the face."

"There is no God. Ironic, it being Easter and all."

Needless to say, I'm enlisting him for a liveblog next weekend, since we'll be in the same place for a Liverpool match for the first time this season.

As for my own thoughts, I'm not exactly sure how I feel. I'm not particularly disappointed, as recent history indicates that trips to St. Andrew's are anything but a sure thing. I'm certainly not pleased, though, particularly with the inability to finish and dropped points when the fixture list just doesn't allow it. In terms of the Ngog-for-Torres substitution, I can't say that it's entirely surprising, and in the context of the week it makes plenty of sense. We know Rafa's no sentimentalist, and to leave Torres on would have been about as non-cerebral a decision as Rafa could have made. And it sounds like Ngog, save for lack of finishing, actually gave a good account of himself. It's an understandable struggle for him to have, considering that he hasn't featured as a regular in months.

And in terms of any further analysis from me, I'll leave it to a couple who actually saw the match:

nate at oh you beauty
steven. at paisleygates

Back into the fray this week---Liverpool's very own Book of Revelation is being written as we speak---which includes a difficult second leg with Benfica in the Europa League and a visit from Fulham on Sunday. As has so often been the case this season, Liverpool will need to try to accomplish the most difficult of tasks---having a short memory while still learning from their mistakes.