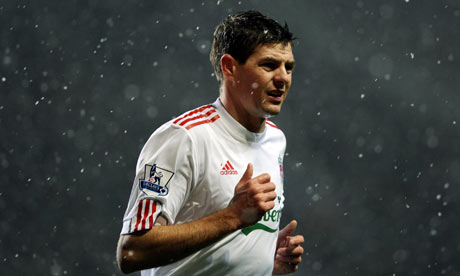 Which is unfortunate, considering the Reds have now notched eight and conceded zero in two matches against the now relegated side.

In the matchday post, I wrote that I was hopeful there was a little bit of "f**k it" in the pre-game plan for Rafa, but I think we all knew that wouldn't happen unless there was the scoreline to allow it. And for the first half and the opening minutes of the second, it would have been a grave mistake. Good thing I'm wearing a bathrobe and sipping coffee in front of a laptop and not on the touchline, eh?

The atmosphere told you this was a big one---the Turf Moor crowd was fantastic throughout the match, even with their side doomed at the end. And, at least for the first 45, you would have never thought this Burnley side were relegation bound. Clearly buouyed by their home supporters and the necessity of the three points, the Clarets came out full of confidence and were the better, if not more impassioned, side nearly the entire half. They only fell short in the final third, creating few chances outside of Martin Paterson's overpowered header and a headed effort straight at Reina by Jack Cork.

But it's not as though Liverpool created much more. Burnley stymied nearly every Liverpool attack through nearly every channel---there was some nice interplay between Gerrard, Aquilani, and Maxi that led to nothing, a Ryan Babel jink led to an arrowed shot that was well wide, and Babel again had a tame effort right before the half.

It wasn't quite Wigan or Portsmouth, but there was an uncertainty present for Liverpool that was more than worrying. And the first few moments of the second half did nothing to assuage these worries, as Burnley very nearly took the lead. Miscommunication in the Liverpool back line almost allowed Fletcher a chance, but nothing came of it, and very shortly Burnley would be punished for their missed opportunities.

After Dirk Kuyt limped off with a calf injury, Steven Gerrard took the reins. The captain gathered a pass from twenty-five yards out, dribbled towards the box, and put a shot goalwards, and the resulting deflection off Tyrone Mears (?) left Brian Jensen with no chance. It was a fortunate result, and maybe a little harsh on Burnley, but the relief it brought was more than welcome.

If that didn't entirely deflate the Burnley faithful, Gerrard's second had to. Alberto Aquilani's lost footing after a Maxi Rodriguez pass turned out to be another stroke of fortune, as the ball fell perfectly for the onrushing Gerrard, who made no mistake with his goal of the season. His curling effort at the near post from the edge of the area was unstoppable; it was a stunning, vintage Steven Gerrard goal that we've longed for all season. 2-0 to the good, and it was all but over.

Liverpool added two more to gloss it up, including Maxi's first for the club and a Ryan Babel squeaker that sneaked past Jensen to kill it dead. Burnley had little more to say other than a consolation that was denied in the final minutes, and their run in the Premier League has, at least for the year to come, ended. As I mentioned, though, it was an impressive display all around---their supporters put some of the "bigger" clubs to shame, the players ran themselves ragged, and there was no quit to be found.

Liverpool gave a decent account of themselves as well, mostly in the second half. The inclusion of Alberto Aquilani inevitably brings about the phrase "attack-minded," and while he certainly made his mark in attack with three assists, he also showed the intelligence and skill that we've been waiting to see. He also make plenty of silly mistakes, most notably in the passing game, but it's to be expected when he features so little. The patience has worn thin for many, but for me, there's plenty of optimism left regarding Aquilani.

And it was another deserved for Pepe Reina and his back line, who welcomed Daniel Ayala with open arms. There were a few nervy moments for the youngster, but at 19 he showed a composure that belied his years and inexperience. Masch had another good, if slightly anonymous, match, and the wing play of Maxi and Yossi Benayoun, the latter of whom came on for the injured Dirk Kuyt, created more than enough space.

Only two matches left in league, with Liverpool very nearly eliminated from Champions League contention and fighting to stay alive in the Europa League semi-finals. It's still going to be an interesting finish any way you cut it---Chelsea at Anfield is always special, and Atletico's visit on Thursday is sure to be another famous European night. There's not often pride associated with finishing where Liverpool are destined to, and rightly so. But my hope is that regardless of the numbers, this club will show us why we're so determined to see them succeed.