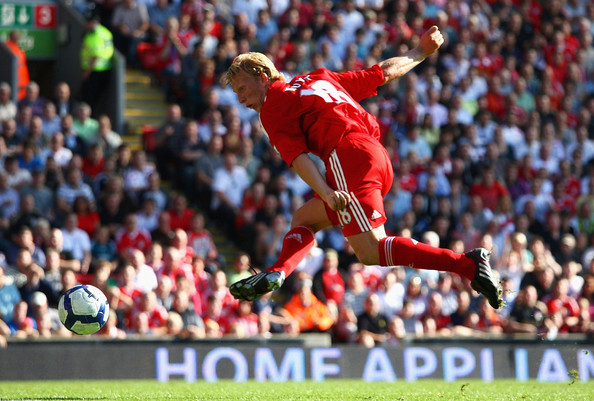 A couple of fresh faces for Liverpool at Turf Moor.

Ayala's the big surprise, coming into the squad for the Greek. Otherwise, this is about as strong as Liverpool get given fitness and injury concerns. It's certainly an attack-minded side, with Aquilani, Maxi, Babel, and Gerrard all in support of Dirk Kuyt as the lone striker. Part of me thinks that this is all tactically-based, part of me thinks that it's just a "ah f**k it, let's just score goals" move. Hopefully the scoreline will allow an appearance from Nabil El Zhar and Dani Pacheco, but let's not get ahead of ourselves.

The biggest news of the morning, first mentioned by Rosco in the preview post, is that Fernando Torres has expressed concerns about his long-term health should he play out his days in the Premier League. I think we can all agree that his short-term health has been most concerning during his time at Liverpool, and I can honestly say that I hadn't thought much about the long-term impact of his time with Liverpool. We all worried about the consequences of such a bad season in terms of prestige and not playing at the "highest level," so adding this to the mix pushes my anxiety to DEFCON 5. But it's the News of the World, British press, notorious for dramatics and mountains out of mole hills, etc. etc., sobsosobsobsob.

In other news that will increase the minutes you spend listening to Fall Out Boy and reading Twilight, Rafa's apparently prepping his family for the switch to Juventus. The Italian club are putting together an unrivaled financial package for the Spaniard, and he'll have his pick of the litter for staff and personnel. And while the article explicitly states that Liverpool have heard nothing of the matter, I can't imagine that they would. If Rafa does leave, I'm doubting there'll be fireworks.

And opinions are relatively split on whether or not his leaving would be worth putting on more eye liner. For John Toshack, not so. He's added himself to the list of former players that's not in love with the way Rafa has done things at the club, and the Wales manager directly questioned Rafa's dealings in the transfer market. He's not saying anything new, and it's not entirely accurate, but it's a clear indication of the frustration that's around the club right now.

As for the other side of the coin, Chinese businessman Kenneth Huang has been linked with purchasing the club, and if the deal goes through he'd like Rafa to remain in charge. Well, actually he thinks that Rafa Benitez is a "very good coach." But you guys can do subtext just as well as I can. I'm ignoring everything else in this article, though, because the biggest revelation in that Hicks and Gillett were asking for a billion dollars back in 2008. We know Mr. Huang is a fiscal conservative, as he labeled that price "completely unreasonable." If it's true, though, there's no better indicator of how naive and arrogant Hicks and Gillett were coming into this deal---buy a prestigious club, make a quick buck, sell for huge profit, cryogenically freeze themselves, do it again in 3045 with Walt Disney and Michael Jackson. Bastards.