Share All sharing options for: Atletico 1, Liverpool 0: Expecting the Expected 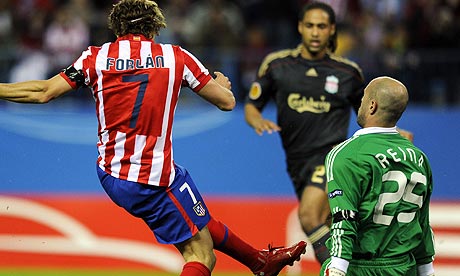 Other obligations prevent any sort of thorough recap or reflection tonight, although I'm not that: a) I would want to try to be thorough, or b) this one deserves much more than a paragraph. So here goes.

Despite pre-match assurances to the contrary from Rafa, Liverpool came to defend, conceded a sloppy goal, should have had their own when Yossi Benayoun's was wrongly ruled offside, but never deserved anything more than a draw. Outside of the Benayoun chance there was little worth writing about in attack, and while Atletico weren't exactly lighting the place up, Liverpool were clearly impotent going forward. Even with the European away plan in full effect, it was a less-than inspired performance. Not for lack of trying; rather, this was just poor execution and lack of creativity. Where have we heard this before?

Pepe Reina kept Liverpool in both match and tie with another sparkling performance, and outside of conceding the Forlan goal, the back line wasn't awful. They were matched and likely outdone by the Atletico backline, who conspired along with David Ngog and Dirk Kuyt to render Liverpool useless in the final third. Clearly a very different story from Monday at Anfield, but it wasn't down to trains and buses. This was down to a frustratingly familiar Liverpool attack, Fernando Torres or not. The past two first-leg affairs have taught us that all is not lost---and at 1-0 headed to Anfield, it certainly isn't. But today's display couldn't have inspired much confidence, and things have to get real better real quick.

Back tomorrow with more thoughts if I can stomach a re-viewing of the full match or its highlights, but right now my gut says it's not likely. And to blame it all on Liverpool's lack of quality would be to ignore a very resolute performance from Atletico, who matched Liverpool's tactics at every turn and were impressive in their own right.